Brilliant Recent Posts
This is working America under corporate and bankst...
This is what happens in the aftermath of "voting b...
Baby. It's what's for dinner.
But it's really GREAT shit, Mrs. Pressky.
The Magnificent Seven
All that tea party outrage against immigrants who ...
Made of Patterns That Can Scarcely
Show Tune Hipsters
News You Can Use
The Scarlet Letters 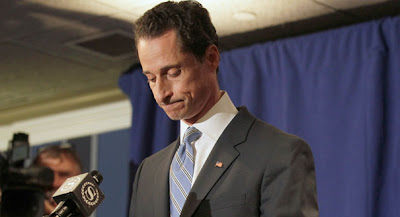 Today it was confirmed that Rep. Anthony Weiner (NY-9) will resign as a US congressman after it was revealed three weeks ago that he'd sent lewd pictures of himself to several women on Twitter. Many Democrats, including House Minority Leader Nancy Pelosi and even President Barack Obama, had called for Rep. Weiner's resignation. Already, things are changing on Capitol Hill in the wake of WeinerGate. What are some of the biggest changes?