Brilliant Recent Posts
And there you have it
The madwoman in the attic
Top 10 Reasons Why Donald Trump Bowed Out of the P...
Just to Play Devil's Advocate...
Nothing to say today
Not to know him is to love him
Are You Smarter Than a 10th Grader?
I wonder how those twisty Teabagger brains are goi...
The Decade of the Locust
Jamming Down the Pedal Like He's Never 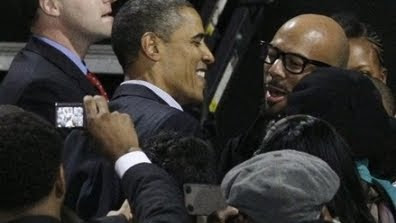 "(Y)our music is very positive. And you're known as the conscious rapper. How important is that to you, and how important do you think that is to our kids?" - Fox "News" reporter Jason Robinson to rapper/poet Common, October 2010.

LBJ had an inferiority complex regarding the Kennedys and for good reason. While JFK and Jackie held lavish parties honoring Nobel laureates and other men and women of distinction in the sciences and humanities, Johnson was letting loose with war whoops in the Taj Mahal and picking up dogs by their ears.

So it came as no surprise to those in LBJ's inner circle as he sought to show they were just as cultured as their predecessors when Lady Bird Johnson organized the Festival of the Arts for the middle of June, 1965. But when Lowell was invited to participate in the Festival, he knew who'd actually tendered the invitation. Like any other American, Lowell at first accepted then thought better of it.

On May 30th, 1965, he sent Johnson a letter which was published in the NY Times the following June 3rd. Declining the invitation, it read,

When I was telephoned last week and asked to read at the White House Festival of the Arts on June fourteenth, I am afraid I accepted somewhat rapidly and greedily. I thought of such an occasion as a purely artistic flourish, even though every serious artist knows that he cannot enjoy public celebration without making subtle public commitments. But, after a week's wondering, I am conscience-bound to refuse your courteous invitation. I do so now in a public letter because my acceptance has been announced in the newspapers and because of the strangeness of the Administration's recent actions.

Although I am very enthusiastic about most of your domestic legislation and intentions, I nevertheless can only follow our present foreign policy with the greatest dismay and distrust. We are in danger of imperceptibly becoming an explosive and suddenly chauvinistic nation, and we may even be drifting on our way to the last nuclear ruin.

I know it is hard for the responsible man to act; it is also painful for the private and irresolute man to dare criticism. At this anguished, delicate and perhaps determining moment, I feel I am serving you and our country best by not taking part in the White House Festival of the Arts.

It was said the roar from the Oval Office could be heard all over the White House. Just as the 1964 general election was to be a referendum on how much LBJ was loved by the post-Kennedy electorate, so the 1965 Festival of the Arts was supposed to be a referendum on how cultured the Johnsons were. Then along came that troublesome poet Robert Lowell. As with virtually everything save his successful domestic legislation, Vietnam emerged and defined even something as non-political as Johnson had hoped the Festival would be.

Lowell was pragmatic enough to know that anything of this nature was all window dressing that would be forgotten in a day. He would write to a contemporary about how poets would be feted one day at the White House then in the next he'd read in the paper about the administration sending more troops to Vietnam. At least as far as politics went, Lowell was much more pragmatic and realistic than the Republican Robert Frost, who was so desperate for public honors in the last years of his life that he shamelessly sucked up to the liberal Kennedy administration.

Yet for all our 235 year history, there is no single, annual event that honors distinguished people of the sciences and humanities, at least nothing at the same time of the year and under one name. We have the Easter Egg roll in the spring, the pardoning of the national turkey in November and the lighting of the White House Xmas tree in December.

The Bush administration made one abortive effort to prove its cultural bona fides until they got wind of some left wing poets protesting the event and canceled it by taking Plato's and Socrates' theo-fascist take on banishing poets from the Republic a little too literally.

Then a week ago, Fox showed its true color (I'll give you three guesses which one that would be and the first two don't count) by posting a blurb with the headline, Michelle Obama Hosting Vile Rapper at White House?


As usual, the message was quickly organized and strictly enforced at The Reichstagg Fox News HQ and the usual suspects were quick to jump on the rapper it had once deemed "responsible" and a "positive" influence on kids. Along with Bill O'Reilly, Sean Hannity was already chomping at the bit when news of this window dressing at the White House was put up front and center as if this was the biggest news story they could find. And even though no one in the MSM has come out and said it, it's essentially the same old meme that Fox was peddling in 2007, 2008 and even up to the present day: Warning white people about Angry Black Man Syndrome.

Common, you see, had in the past defended Assata Shakur, a woman convicted of killing a New Jersey cop in 1973. Exhibit A is the song, "A Song for Assata." Common, to those of us who aren't motivated and guided by racism, was merely questioning whether or not Shakur got a fair trial.

Hannity dutifully trotted out two African American right wingers to prove there was no racial bias whatsoever, although it's tough to see how the pair of panelists could be construed as experts on or even having any sensibility for rap music or modern day poetry.

Eventually, even Sarah Palin, another white person and one who's no friend to the Alaskan State Police, chimed in from her little Twitter balcony.

How soon Fox forgot and how completely bereft of irony they were in condemning a man today for a song he wrote and sang years ago since they sang his own praises just last October. How how fast they forgot about how they embraced and defended Ted Nugent's more legitimate white rage at then Senator Obama by telling him to suck on his machine gun and how he's "a piece of shit." (For good measure, the aging rocker also spewed misogynistic diatribes against future Secretary of the State Senator Hillary Clinton and future Speaker of the House Representative Nancy Pelosi.)

But we all know that Fox "News" and its Republican Party ventriloquist dummies are insensible to irony and even the most universally acknowledged and abstract truths.

Lowell, in his own unintentionally loud way, criticized the establishment for the "strangeness of (its) recent actions." He had taken a brave stand by banishing himself from one day in the Republic without any of the Republic's help. Common's only mistake seems to have been defending someone whom he thought had not received a fair trial regardless of the heinousness of the crime.

Fox's mistake was in lauding the usually noncontroversial Common then turning on him when an administration led by a black man decided to invite him for a fluffy poetry reading before the president went back to killing innocent Afghans, Iraqis and Pakistanis. Suddenly, it was, Angry Black Man Goes to White House to Read for Other Cop-Killing-Condoning Black People.

It stands to reason that if Bono or Bruce Springstein or Bob Dylan or any other white person had written "A Song for Assata" this issue would've been a non-starter.

But the folks at Fox "News" seem to have taken Plato's and Socrates' theocratic-based fascism to heart (although it's tough at best to imagine anyone in Rupert Murdoch's circle having even read Plato's The Republic) when they called for the banishment of poets from the state.

The draconian call for the banishment of poets was based in part on Plato's and Socrates' belief that all poets not divinely inspired be expelled from the polis on the grounds they would eventually delude and mislead the public (Socrates, ironically, was executed exactly for the same charges). While not touching what exactly constituted "divine" inspiration in the polytheistic world of ancient Greece, their intentions were morally pure in calling for a stringent set of guidelines for all poets past, present and future: Thou Shalt be Honest, Truthful and Work for the Public Good.

Like Jon Stewart, I can't speak for Common or any other poet but one must assume he felt his song had at least hugged the baseline of truth in questioning if Shakur's conviction was a just one.

Plato's greatest inspiration was his mentor Socrates, a man who never put pen to paper because he was illiterate. It's ironic that Fox's contributors are also functionally illiterate when they, too, start chasing phantoms out of their vision of the Republic based on words they truly cannot read.
0 comments