Why Did Hillary Clinton Hire a Monsanto Lobbyist to be Her Campaign Director?
Posted by jurassicpork | 8:30 PM 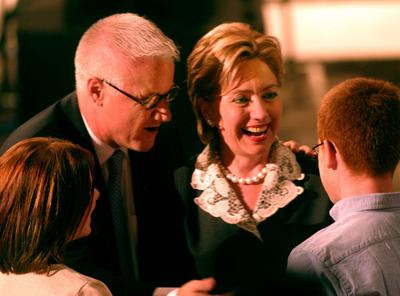 Good question, if you know nothing about Hillary's cerulean canine roots. But one fact that remains glaringly obvious to those of us paying attention to these things and those Hillary supporters who are just as strenuously ignoring those pesky facts is Hillary officially hired Monsanto fuck stick Jerry Crawford to manage her presidential campaign.
Of course, the so-called liberals who back Hillary can be excused for not knowing their facts about their girl since the MSM is largely worthless in bringing up those inconvenient facts, as evidenced in this breezy puff piece in the WaPo's Style section. Yeah, I know Style pieces in any paper are supposed to be ultimately worthless, breezy eye candy. Yet, since it contained hard political data (such as Crawford failing to deliver even a place much less a win for Hillary in Iowa in 2008), you'd think Monsanto's good name would've merited at least a fleeting mention.
And to anyone who pays even a scintilla of attention to anything Clinton says, it's screamingly obvious this woman has been pimping for Monsanto to the point of practically gargling Roundup after sucking various cock at the Biotech Industry Conference in San Diego last year. How anyone, especially a self-styled Democrat, can publicly and frequently advocate for Genetically Modified Organisms is beyond me except when one considers benefits of such a whoring for an evil empire such as Monsanto (even when her campaign manager no longer works for them).
Let's take Crawford's track record: He's long been considered a kingmaker for Democrats in his native Iowa, especially those who are friendly to Monsanto (which alone ought to show you of the alarming number of supine so-called Democrats that Crawford's helped over the years). But even when it meant costing a "fellow" Democrat a job, Crawford supported the Republican running against him and, well, just keep reading.

Jerry Crawford also played a big hand in the 2010 Agriculture Secretary election, which was an election that showed Monsanto does not care about a person’s party allegiance as long as said person doesn’t oppose them. The reason why is because the election’s Democratic nominee Francis Thicke was a critic of Monsanto. Ergo, Monsanto showed major support for the Republican nominee Bill Northey. Crawford would then endorse Northey, touting his backing as evidence of “strong bipartisan support.” Crawford even said he was a “veteran Democratic political insider” to help push Northey. As a result, Northey won the election with a landslide 67 percent of the vote.

That kind of Tonya Harding-style kneecapping verges on Karl Rove territory yet the WaPo would have us believe Jerry boy's a simple ole Midwestern lawyer with a love for fast horses and slow candidates.
I had Hillary pegged eight years ago when she ran a campaign that was, predictably, more rotten with lobbyists than even John McCain's (which is saying something). But you'd have to be a complete fucking idiot on a par with a Trump supporter to be duped by Hillary's easy populism about taking on the 1% of which she's a part and from whom she's vacuuming up enormous amounts of bribe money to spout their lines.
Yeah, tell me again about how Bernie's not electable, at how he's not viable. But one fact remains clear: When Bernie veers into populist rhetoric, his populism is merely incidental because he means what he says.
Oh, by voting for Bernie in the primary I'd be "splitting the party?" Perhaps. If that's what I'd be doing, then that's because this Crawford learned that trick from another Crawford.
0 comments