Brilliant Recent Posts
Why not just make a freaking phone call?
This is the greatest thing in the history of things.
Random Monday Thoughts
Bambi vs the Wisconsin DNS
It's Friday I'm In Love
Top 10 George Zimmerman Excuses for Speeding
The national scourge that is white violence
Carlos Danger, Private Sextitextigator
Truth is Stranger Than Fiction
Doubting Thomas 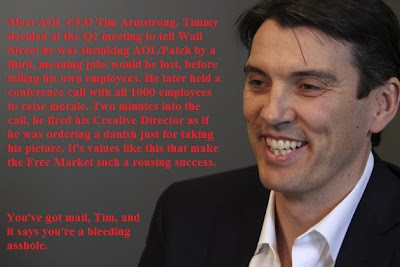 (Tip o' the tinfoil hat to faithful reader CC)
In the interests of context, in case you haven't read the lead story on Yahoo:
Tim Armstrong, All-American Boy and corporate sociopath CEO of AOL, announced to Wall Street (before telling his own people) that he was shrinking AOL/Patch from 900 to 600 websites. When this filtered down to the troops, morale, understandably, drooped like Bob Dole's cock before a naked Elizabeth Dole because that means a loss of jobs. So in some Hannibal Lecteresque simulacrum of empathy, Armstrong arranges a conference call to rally them. He begins by telling them that if they don't like the changes, they can get out.
Two minutes later, he fired his Creative Director, Abel Lenz, for taking his picture, something he was known to do during executive conference calls. You can actually hear his termination right here, just after two minutes in.
Wow, what pure, unadulterated executive scum, eh? I was surprised to hear AOL still exists. I thought that by now they would've been folded into a better, hotter website like Instagram or Twitpic or Rentboys.com or something with superior socially redeeming value. AOL is like the floppy discs or 8-tracks of online society, something clung to by Backstreet Boys and Limp Bizkit fanboys, something that should've and could've served as an object lesson to other future digital dinosaurs such as Myspace, Friendster and, hopefully, Facebook.
In a perfect world, this arrogant, Neanderthal-looking executive cockbite will one day know his place the hard way, a world in which karma reigns with the irresistible supremacy of the divinely inevitable. But we live in a perfectly imperfect world and he'll lay off hundreds and when the ill-conceived AOL/Patch finally does go belly up, AOL's Executive Compensation Committee will give him a nice diamond-encrusted, platinum parachute for tanking the company and putting countless people out of work, starting with that poor bastard he shitcanned during a conference call ostensibly to rally the troops and raise morale, someone he fired like he was ordering coffee, just for doing his job.
Then again, if I was a lantern-jawed caveman like Tim Armstrong, I guess I wouldn't want my picture taken, either. May he die a slow, lingering death of cancer, preferably on January 16 (because it's my birthday).
I have a problem with corporate executives, in case you haven't guessed, especially multimillionaire sociopaths who aren't even aware of the very rudiments of management understood by anyone who ever ran a gas station kiosk, that you censure in private and praise in public. I'll never understand how two-legged sharks like this fuckstick clawed his way to the top of AOL's rotting heap but Armstrong's not the problem. Like lesions or dysentery, he's a mere symptom of the inevitable moral rot of Capitalism, an economic system that seems to dictate that, to attain the highest level of success, you must hurt many people along the way and not be bothered by it in the slightest.

Irving L. Diablo said...
This blog actually has a few perceptive comments about President Stein. You should give it a read: