Brilliant Recent Posts
Xmas, 1914-5
Caption Contest: Xmas Edition
If it Bleeds it Leads, So Let it Bleed
A Moment of Silence For Newtown
And Something Warm To Cling To
Around the Blogroll and Elsewhere: Again and agai...
The pigeonholing of Adam Lanza
If not now, when?
In the Love Of the Common People
Chappy Chanukah


Christmas 2012
Posted by Jill | 9:53 PM
Christmas sort of sneaked in on little cat feet this year, even though they were the little cat feet of Maggie, who true to form, was yowling at the door at 5:30 AM demanding her breakfast. Ever since Maggie has been on the prednisolone for her inflammatory bowel disease, she's been like a pothead in a Pathmark, constantly wanting to eat. But aside from Maggie, there's a stillness in the air this morning -- a stillness I usually savor on Christmas Eve, but this year we skipped our traditional Christmas Eve Indian dinner in favor of an aggressively unhealthful lunch at a local many-beers-on-tap local pub with my sister and brother-in-law before seeing them off to their home in North Carolina, to which I too will soon be traveling to begin the daunting task of sorting through our hoarder mother's worldly goods, separating the wheat from the chaff. It's enough to make me want to conjure up the old Clean House gang.

Mom always hated the holidays. I blame Norman Rockwell, for conjuring up images of happy families in a timeless America. Mom always felt like the Little Match Girl during the holidays, looking in on mythical images of happy, harmonious, loving families gathered around the Christmas tree and eating a lovingly-prepared meal. In her fantasy world, grandparents were loving, children were appreciative, and she could feel like she belonged. Mom would get depressed every year around this time, and this only became worse after her husband died right before New Year's in 2000. She never was able to let go of her grief for the next twelve years, which might make you think that hers was a lovely story of second chances at true love, were it not for the reality that six months before her husband became ill, she told me she wanted to leave him, take their Rottweiler and move to New York City. It wasn't that he was a bad person, it was simply that he had been unable, despite jumping through hoops for a quarter of a century, to fill the giant, gaping void at the center of her soul. It wasn't until much later that Mom figured out that it was SHE who was unable to be happy, not that others couldn't make her happy.

Mom had almost departed in late September, when the COPD she'd developed after surviving over two decades since lung cancer surgery while continuing to smoke resulted in a dangerous hypercarbia. She'd had a psychotic episode and landed in the hospital, where she insisted that she'd been picked up in the gutter in Philadelphia while wearing a leopard coat at a protest of some sort, she'd been taken to a basement where they'd cut her hair and tortured her in vile ways. It was at least a week before she realized it had been a hallucination. They didn't do anything in the hospital except keep her oxygenated, and after about five days, we were able to get her a placement in an assisted living residence so that she could be released from the hospital.

She'd been deteriorating again the last week or so before my sister was able to line up help so she could go home. She'd been in hospice care for a while, and when she'd become agitated, the hospice people would give her anti-anxiety medications so she wouldn't gasp for breath as her failing heart and hopelessly damaged lungs became unable to do the job any longer.

She died peacefully in her sleep less than thirty-six hours after entering her house. We think that either her heart just finally gave out, or that the hospice medications allowed her to relax enough to let go. She'd been terrified of an end in which she'd be in agony, gasping for breath (and so were we), so it's a blessing that she was able to depart quietly without knowing it was happening. We just had no idea it would be this soon.

It's never spoken of, but when someone dies after a long and deteriorating illness, there's always a sense of relief that it's finally over. For all that Mom had been of varying degrees of suicidal for as long as I can remember, she, like her mother before her, clung to a life from which she had derived no pleasure for a long time.

And yet, I don't feel any particular grief, or even loss. It isn't as if I could ever rely on my mother for reassurance, for emotional sustenance, for anything -- because she was so needy herself that she really had no room to nurture anyone else. It was always all about her -- her problems, her needs, how my problems affected her. Growing up with her neediness, her depression, and her frequent rages was often nightmarish -- it wasn't until much later on that I realized that being interrogated for hours after visiting with one's father was not actually a normal function of a divorced parent. I long ago forgave her for my childhood, because I know that she just was not equipped from her own abusive childhood to parent us. But we have done the hard work of coming to terms with that childhood and moving past it into successful adult life -- something she was just never able or willing to do.

Tomorrow I head south to help my sister sort through the mountain of stuff in her house -- all that stuff that she said she would miss most when she was gone. Part of me is excited at what we might find, and about some of the beautiful antiques from furniture to teddybears to marcasite jewelry that I hope to give a good home. But part of me thinks I may shed the only real tears I will have shed over this entire week, at the utter waste -- the money wasted on handbags and shoes and jewelry and sweaters purchased in an effort to fill the void in her soul and never worn because they were always being saved "for good wear"; on antique dolls and teddybears and magazine subscriptions and exercise equipment never used and all the things ordered in the dead of night from QVC because the nice ladies on TV helped salve the loneliness that no husband, child, or even dog, could salve; and at the sheer waste of potential -- of a sharp mind and a wicked sense of humor that could never quite overcome the deep-seated self-loathing she had.

I can't be sad that she is gone, as I see the end of this part of her journey as a blessed release from her burden of living inside her head for eighty-five years. But I can be sad at the many "second chances" she was afforded in her life that she never could allow to flower.

Be at peace, Mom. At long last, be at peace. 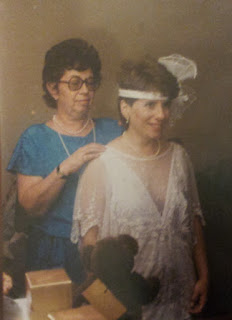 Phil said...
My condolences,for the misery you lived with and to your mothers passing. You will still go through the stages of grief whether you want to or not, may that process be swift.

Melina said...
Beautiful Post, Jill. As always, you speak to my heart and I'm there with you.
I hope this trip goes easy...the stuff is not gonna make up for all the years that she might have shown you as much attention, but its a treasure hunt and you never know what you might find.
We are all pack rats but some of us have bigger houses and storage spaces than others.

Ill be thinking of you and look forward to getting together when you're back.

Have a good, safe trip....
Next year will be a very interesting and wonderful time of renewal and when we will (strive to) start to take a little time to live...

Anonymous said...
Your relationship with your mother very closely mirrors the relationship I had with my "unhappy" mother. And like you, I hope my mother (long since departed) has found peace that she could not achieve in this mortal coil.

Best to you and yours...

jurassicpork said...
I knew about this directly from you (I don't do Facebook, anymore, plus Barb, who still is, is not home for the holidays to have passed it on). And even though I'd tendered my condolences privately to you via email, I would still like to renew them. If you need me for anything, you know how to reach me, Jill.
12/26/12, 1:20 PM

dianedp said...
I am sorry that you have lost your mom.
Your story is so similar to what my sister and I went through when my mother died.
My dad died when I was 9. My mother became depressed and stayed that way for years. She never remarried.
She never received counseling which was a shame,since I think she could have done so much more.
She did not have cancer or hallucinations, but her lungs were damaged by smoking and she developed heart problems.
She was only sick from January and died in June. She died expectantly, we were not prepared and she refused to talk about her affairs, assuming she would be getting better.
Her house house was a mess. She did not prepare for death, even though she was 83. Her finances were a mess and we literally went to all the banks in town asking if my mother had accounts. We went through boxes of papers looking for financial information, tax returns etc for important papers.
It took us 6 months to clean the house. We found my grandfather's discharge papers from WW 1 between canvases my sister did in an art class. We found 200 dollars under the rug in the dining room.
It took us hours and hours to go through everything and God knows what we lost before we realized we had to go though EVERYTHING!!!
And no, her bank(s) were in neighboring towns.
But, the time going through her house brought my sister and I together. We relived our childhood with my dad through pictures and 'things'.
Good luck be kind to yourself. No mom is perfect. A very wise priest, who knew me and my problems with mom, told me to remember the good times and forgive and forget the bad.
I took his advice and have moved on from my imperfect childhood.
I can remember my mother with love and peace
12/27/12, 11:16 AM

Teri said...
Thank you for writing that. I just lost my mother-in-law and the feelings of grief are overwhelming at times that I don't know what to do with them. Reading your words has helped. Thank you and have a happy healthy and prosperous new year.
Teri
12/27/12, 3:07 PM