(By American Zen's Mike Flannigan, on loan from Ari.)
ObamaCare, to put it simply, is a snake venom that nonetheless somewhat succeeds in counteracting an even more pernicious malady. It's the red-hot piece of metal that cauterizes a bleeding wound.
It was never, ever intended to be anything more than that.
It is a position, often a lonely and adversarial one, that had been consistently taken by yours truly in this very byline since the mislabeled Affordable Care Act was first being debated by no less than five Congressional committees starting in the spring of 2009. Yet, conservatives and truly enlightened liberals such as me cannot and should not succumb to the siren lure of schadenfreude in light of the strangely delayed revelations regarding Jonathan Gruber.
Beginning in March of 2010, a week before Congress finally ratified the ACA and put it on Mr. Obama's desk to sign into law, Gruber had openly, brazenly and, seemingly without impunity until now, was crowing about how "lack of transparency and the stupidity of the American voter, whatever" was responsible for the bill's success. Yesterday brought a fifth video (and, no doubt, counting) of a now-infamous testy and condescending exchange between Gruber and a Vermont voter concerned about the ACA's ramifications.
Predictably, wingnuts on Twitchy, Hot Air, Breitbart and other right wing convection ovens have been crowing about ObamaCare's inherent dishonesty, of which most us were already aware. But now they have in Gruber their smoking gun. Five, in fact. And among their talking points is how liberal elitists lied to the American public about the health care bill. But liberals had absolutely nothing whatsoever to do with the bill's crafting, creation or ratification.
ObamaCare was passed in first the House, then the Senate then put on the president's desk to be signed into law as with countless other bills. It was not put on a national referendum and not one American voted for it. None of us little people had any say as to what it would contain or not.
And now, "leaders" such as Nancy Pelosi are playing the predictably scummy, craven political game of distancing herself from someone she'd quoted and mentioned countless times five years ago who has now been exposed as the Most Hated Man in America. Democrats are running from Gruber as if he has Ebola, Obama and everyone associated with the bill who's still on the Hill are in full spin mode and right wingers who were told to hate the ACA by the Koch Brothers and Dick Armey's Freedomwerx now have their health care Willie Horton. 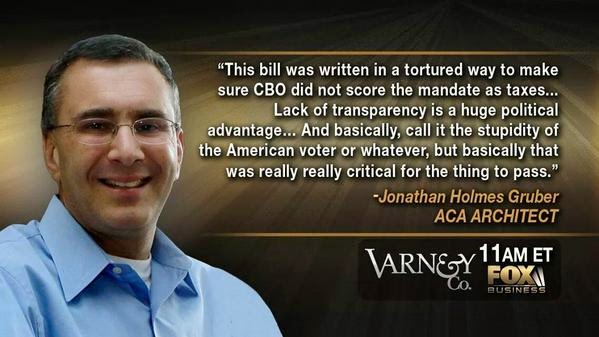 They say celebrities die in threes and regarding the Affordable Care Act, this is the third whammy that may have finally sunk ObamaCare. First was the clusterfuck of a rollout. The government literally had several years to set up a workable website with adequate server space. State-run partners, through their own exchanges, had the same amount of time. But ObamaCare's website immediately crashed like a soggy house of cards because the Obama administration, hardly to the surprise of yours truly, decided to outsource its set-up and implementation to a private corporation.
Secondly, there was Obama's palpable lie of, "If you like your present health care plan, you can keep it," which proved to be as honest and prescient as closing Guantanamo Bay.
Thirdly, there's Gruber's arrogant, condescending and, frankly, out of touch comments about the American people and his pride in the lack of transparency of the government that had paid him so handsomely to mislead the American public
And while conservatives jeered, liberals struggled to put on a happy face and bombed Twitter and Facebook with memes about how Bush killed hundreds of thousands (a place they seriously do not want to go) while Obama had a slow website. Now it's almost entertaining watching these liberals who think that everything Obama does is in some way miraculous on a Biblical level struggling even more mightily to keep on their O faces after ample evidence has been avalancheing down at warp speed 10 out of the past that its architect called them "stupid."
It's impossible to estimate the embarrassment this has visited on the Obama administration, which paid this man over $400,000 to craft a bill that was mislabeled as almost all about health care (hence the inevitably sarcastic name of the bill). It ought to be embarrassing to the mainstream media (especially ABC, which is still ignoring it) for letting these explosive revelations languish for better than four and a half years. And it should be embarrassing to any Democrat still in Congress who'd voted for such a steaming pile of horse shit.
Most of all, it should be embarrassing to so-called liberals such as Esquire's Charles Pierce (who seemed to love it simply because it helped his ailing wife) who thought the tepid reforms and it being just a giant gateway to the free market was the greatest thing since Medicare (which in 1965  LBJ signed into law without him or Congress having to mislead the American public). In short, anyone who hated the bill or opposed it with such virulence should be stripped of their voting rights and undergo a mandatory psychological evaluation since it seems no one save for Gruber, the President and several people on the five committees that had refined and crafted it knew exactly what it was all about.


The Three Blind Chinese Men and the Republican Mascot 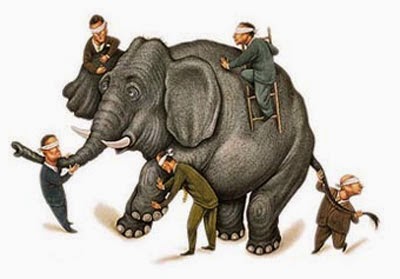 I'm sure we all know the story of the three blind Chinese men and the elephant. One blind man felt the tail and thought it was a rope. Another at the other end felt the trunk and thought it was a snake. The third in the middle thought the stomach was a wall. The parable only shows that, without the proper context, individual parties can be completely wrong about what they think they perceive.
This perfectly describes the second-hand experience of the American voter who had no say in the bill's crafting and had foisted off on them like a pile of flaming dog shit on Cabbage Night. It was a testament, albeit a sad one, of the persistent cheerfulness and glass-half-full optimism of your typical Obama voter.
But the fact remains that out of all the bills signed into law by the nearly six year-old Obama administration. the ACA is easily the most misunderstood one of all. And that's not completely their fault. The administration's and Democratic Congress's explanations of it were largely incoherent, almost as much as the Teabaggers' screaming oppositions to it during Town Halls in the summer of 2009. And Gruber did, after all, lie to not just us but the nonpartisan CBO over how the ACA should be packaged and sold (90% cost control and 10% mandatory health care instead of the opposite). Yet it wasn't as if there was a complete media blackout of the bill's contents.
However, liberals chose to ignore the back room deal struck by Rahm Immanuel (whose very name ought to be, if it already isn't, synonymous with arrogant, Democratic elitism) and Big Pharma to cap drug reimbursements at $80,000,000,000. La de la de dah, dig hole in sand, insert head. Repeat as necessary.
Liberals also stuck their fingers in their ears when Max Baucus, then chairman of the Senate Finance Committee, refused to hear testimony from universal single-payer advocates and even made a joke about arrested protesters to Republican Chuck Grassley about running out of cops. Liberals were also nonplussed that the ACA was never, ever intended (despite Obama's immediately-broken campaign promises) to be anything more or less than a gateway to the very same health insurance companies that have been bilking the American taxpayer, and government, for decades, turning our health care system into the rest of the world's punchline.
And Gruber's abominable and infuriating comments about the "stupidity" of the American people that he nonetheless willfully mislead and even lied to show just how much of an out-of-touch elitist he truly is. His comments back on March 10, 2010, when the bill was still being hashed out, that Americans care much more about health care costs and far less about insuring the uninsured are so wrongheaded and ignorant it's beyond laughter.


One Shade of Grayson 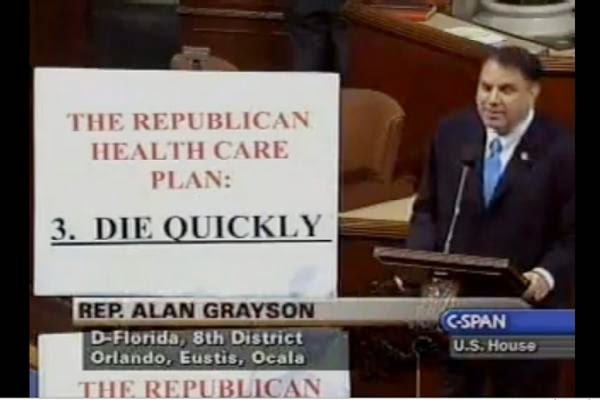 I guess he forgot all about Alan Grayson constantly hammering home the fact on the floor of the House that 48,000,000 Americans were uninsured and that 45,000 Americans die each year because of lack of health coverage. I suppose Gruber also forgot about liberals (the real ones) screaming about universal single payer and not allowing red states to opt out of Medicare expansion out of a misguided and futile attempt to respect "states' rights" (a sop thrown to the GOP that got exactly two Republican votes in the Senate and has not done a thing to keep Republicans from voting no less than 52 consecutive times to repeal ObamaCare).
Limousine liberals and the Obama administration (as I'd said here several times) made the colossal mistake of investing so much political capital on one piece of domestic legislation so early in its history. With the Iraq War, Afghanistan, terrorism, Gitmo, immigration, environmental issues, gay rights and too many others to name, the Obama administration should've dispersed its political capital more evenly instead of putting all its eggs in one basket.
And so-called liberals, happily following that disastrous meme, acted as if the success of the rest of the Obama administration rested with ratification of the ACA, a bloated and more unwieldy version of the equally disastrous RomneyCare here in Massachusetts.
Liberals had it only half right as were spittle-flecked teabaggers who didn't, couldn't or wouldn't understand it any better than we: ObamaCare has undoubtedly saved lives and over 10,000 fewer Americans are dying every year through lack of coverage. It has driven down premiums, deductibles and co-pays as well as abolishing the prejudice against those with preexisting conditions. And your child can remain on your health care plan until they're 26.
But it was, at best, a vastly flawed work in progress and in desperate need of improvement. Liberals made the mistake of seeing it, hairy warts and all, with the peculiar beer goggles with which lonely horny men see the last barfly at last call. If it was to be so popular, then why enforce "compliance" through two bylaws in the federal tax code? Conservatives hoarsely screamed as they were told to that it was a Commie takeover of 1/6 of our national economy while Sarah Palin sneeringly claimed to see death panels from her house.
It was neither. It was a single, staggering step in the right direction, with muddy bootprints. But with Gruber's astoundingly stupid confessions these past four to five years, this may be the monkey wrench the newly-empowered Republicans have been looking for to finally repeal the ACA and put us right back to the Dark Ages we were in prior to the bill's passage. Liberals and conservatives ought to stop pointing the finger at each other and at elitist assholes such as Gruber and Obama. We were all had.