Brilliant Recent Posts
Good Times at Pottersville, 4/25/14
The Railing Class
44, 44 and 44
Florida governor Rick Scott: Still feeding at the...
It's been six months already
Because in America, we don't give a shit about fam...
Panic in Gunland
North Carolina is looking better by the day
From Bridgegate to Bridgetgate
Top Ten Facts of the MH370 Air Disaster


The Not So Great White Hope
Posted by jurassicpork | 6:00 AM 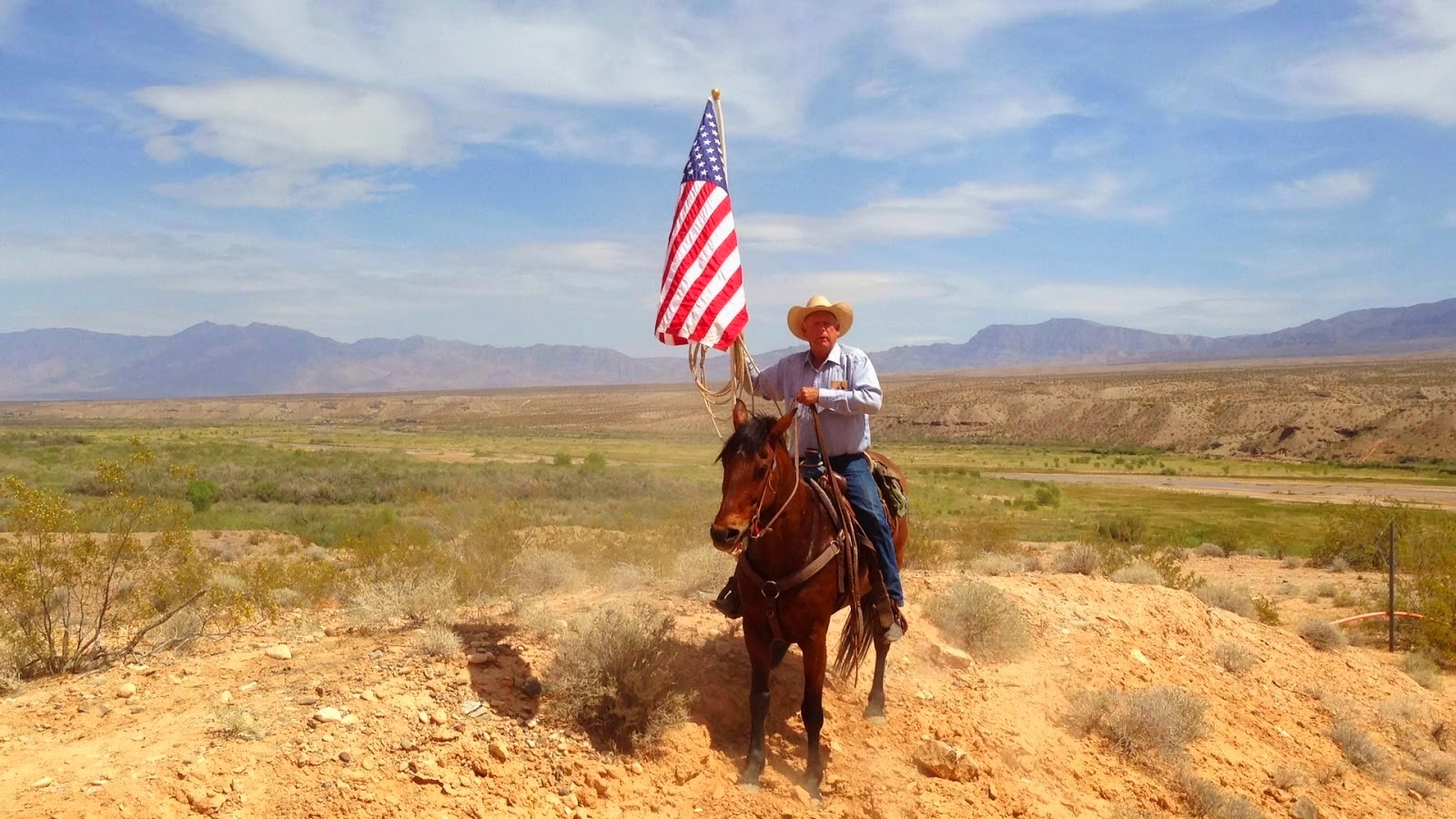 (By American Zen's Mike Flannigan, on, loan from Ari.)

"And I've often wondered, are they better off as slaves, picking cotton..." - Cliven Bundy
"Slavery is such an ugly word..." - Stuart Best, Murphy Brown, from his special interest position paper

Perhaps, when he was growing up in the Nevada desert back in the 50's, Cliven Bundy had always dreamed about being a cowboy. And, to look at him now, with his Bushian pretensions and personal fortune he's made in the cattle business, it would seem as if he'd succeeded in realizing his boyhood dream. But between then and now, something very wrong happened and Cliven Bundy became not so much a cowboy but a pirate.
It would seem that Bundy doesn't have a legal leg to stand on. By an Executive Order, the right wing's patron saint, Ronald Reagan, indefinitely extended grazing fees that would include Bundy. The Nevada state constitution by which Bundy swears in defiance of the US Constitutions explicitly states that federal law trumps all others, including the Nevada state constitution. Cliven Bundy is a moocher, plain and simple. That's hardly up for debate.
And you would think the government, which is owed $1.2 million in grazing fees going back to 1993, would do more than make a half-assed, half-hearted attempt to confiscate a small percentage of his cattle only to forget that possession is eight tenths of the law and to allow right wing militias to literally steal back Bundy's cattle right from under their noses.
But this byline today isn't concerned about Bundy being a tax-dodging moocher but about his attitude toward those whom he claims are moochers: African Americans. And at the heart of this byline is a question that's always plagued me: Why are we so shocked, shocked to find racism in our midst when it rears its white, pointy head?
It wasn't too long ago when, to our enduring horror, we'd heard the FAMiLY LEADER preamble which stated,

You may remember that was signed in 2011 by Michele Bachmann and Rick Santorum. This would be the same Republican Party that had refused, in 20 instances, to co-sign statements of support for a 2005 bill that formally apologized to lynching victims and their families and initially refused to assemble for a roll call vote so a quorum couldn't be assembled. 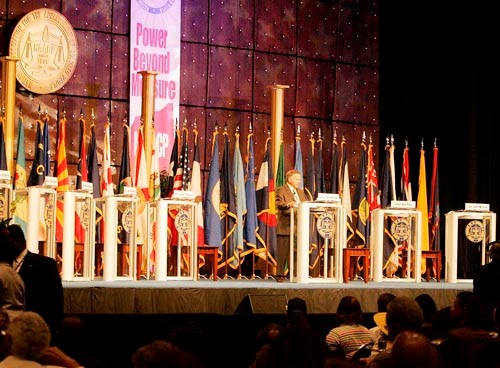 This is the same party, incidentally, that (save for Tom Tancredo) refused to field their candidates for a debate hosted by the NAACP at their annual convention in 2007. There were eight no-shows out of nine. The Democrats, on the other hand, fielded all theirs.
Long before Cliven Bundy rode out of the digital sunset into our living rooms, racists and other assorted bigots have been crawling out of the woodwork like termites from a freshly fumigated house. We were horrified beyond measure when we learned that Paula Deen and her brother Bubba used the "N" word and pulled off a plantation-themed wedding. We were horrified beyond measure when John Rocker inveighed against people of color in the New York subway in the 90's. We were horrified beyond measure when Michael Richards, in an inexplicable racist tirade, screamed the "N" word over and over again during a night club routine.
So why are we so shocked beyond measure when Cliven Bundy says that "negroes" ought to be enslaved again picking cotton so they can stop sponging off the tax dollars not paid by guys like Bundy and fellow Mormon tax dodger Mitt Romney?


"Don't blame me. I've been dead since 1968."
The backlash from Bundy's astoundingly racist invective, extreme even by establishment Republican standards, was predictable. It goes without saying the distancing from the right is rooted not so much as actual, legitimate outrage as it is concerns over incumbency and ratings. It certainly didn't get any better when Bundy doddered into CNN's trap yesterday afternoon alternately holding a boot and a dead calf and blaming the dead Rev. King and KKK-splainin' the slain civil rights leader did not do a good enough job in stopping people from gittin' all riled up an' uppity-like when privileged white racists like Bundy call for the return of cotton plantation slavery.
But, as we've seen time and again when one or another strays like a Bundy cow, when the right wing withers and shrinks from someone who made a particularly toxic statement, it's rarely if ever because the message was so offensive: It's because they made it so damned obvious and, so close to a midterm... 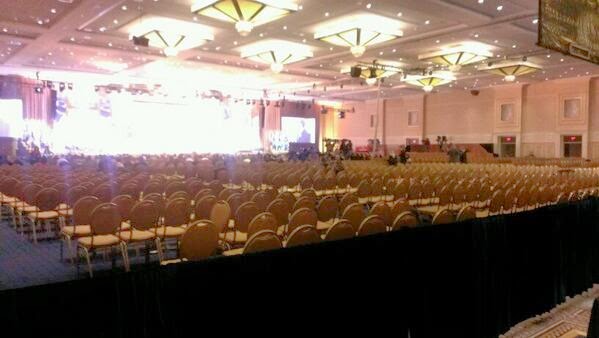 ...the GOP can't afford that, considering how swimmingly their women and minority outreach campaign is going (let's not forget that one of Bundy's fine "patriots" in his Mouse That Roared army, a former Arizona sheriff, proudly admitted on national TV as having considered using women as human shields).
But this strain of selfish racism is far from rare, existing only in sparse pockets here and there in Appalachia and the Midwest. It's always been infesting our country, presenting symptoms to the body politic and social that are allowed to remain invisible because, like the SCOTUS, we'd like to pretend racism no longer exists. Many liberals, ordinarily more enlightened and educated people, actually thought we'd ushered in a golden (or less white) new age of post-racism just because we elected our first African American Chief Executive.
We blithely ignored the fact that gun sales skyrocketed after both elections and the paranoid right wing is still hysterical about Obama taking their tax dollars to feed his fellow "negroes" and their precious guns that 2nd Amendment gun-clutchers love more than the GOP does children or veterans. We were shocked beyond measure when Republicans began exchanging emails showing watermelon patches in front of the White House and Tea Bagger signs at rallies depicting the President as a monkey or an African witch doctor.
What happened? We were supposed to be post-racial!
Blithely, we chose to forget that 55,000,000 still voted against Barack Obama in 2008 and even more in 2012. I'm not saying every McCain or Romney voter was a racist but you can bet they were in full force at the polls during those two nights.
Let's hope Bundy doesn't parlay this into a Duck Dynasty spin-off or that a literary agent will fling his body on his doorstep hoping to sign him to a Christine O'Donnell ghost-written book destined to sell in the hundreds. But let's stop pretending racism doesn't exist and, like Charlie Brown, always being astonished when the football of equality is snatched from under our foot.
0 comments