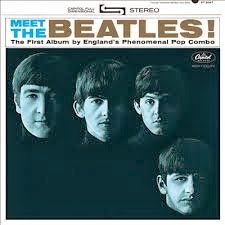 Fifty years ago last Sunday they arrived. We knew The Beatles were coming months before they arrived here.  I was suspicious. I liked rock & roll.   I liked many kinds of music. I didn't have a great cultural or emotional investment in rock & roll.  Those early Beatles singles & the LPs Meet the Beatles & Beatles Second were enjoyable, but they didn't bowl me over.   The Beatles' music seemed too slight to support the madness.  & then there was the marketing: authorized merchandise, Beatles wigs, lunchboxes, dolls, pinup magazines etc. etc. aimed at 10-12 year old girl demographic. Manager Brian Epstein wanted his band innocent enough that parents would buy the crap Beatles merchandise for  the little girls. What happened in high school was a bit different. I was 15, a sophomore.  The 14 & 15 & 16 year old girls I knew who fell in love with one or another of the Beatles did so with self-aware & barely disguised lust. All Epstein needed to sell them were the records & record jackets & some glossy photos of the boys. Their photos were in all the magazines.

My favorite single of 1963 was  Candy Girl b/w Marlena,  by The Four Seasons.  two sided hit bigger in Philly & Atlantic City than NYC.  I had been impressed by some of the songs, vocal harmonies,  on Surfer Girl album.  I thought the Beach Boys & Seasons could cover each other's songs. My favorite LP of '63 was either a movie soundtrack or Stan Kenton's Adventures in Jazz." I was fond of Martha & the Vandellas.

Some kids in my high school detested  The Beatles. There was a serious Fifties hangover   teen culture in my h.s.,  plus leftovers of the folkie hootnanny, which continued to move songs into the top 40, neither of which I much appreciated. The Fifties influence had become parody. The Beatles broke over those like a tidal wave.  That's why I liked The Beatles. As a little kid immersed in the malt shop world of Archie Comics &  Ozzie & Harriet, I had envied teen culture of the mid-Fifties because it had Elvis, plus doo wop & Buddy Holly.  Elvis was a transformer. I must confess to also liking Bob Denver's gentle teen beatnik Maynard G Krebs from Dobie Gillis.     But Elvis meant almost nothing to us in 1964, beatniks were disappearing, there were vestiges of doo wop in the top 40 but lacking the purity & ethereal qualities  of the music that had enchanted me in grammar school. Occasionally a decent song popped out an Elvis Movie. The Beatles were our Elvis. I recognized that much & embraced the change. Soon enough more  music flowed from England, like The Animals' great "House of the Rising Sun." Had to put up with Gerry & Pacemakers & Freddy & The Dreamers &  other forms of mindless profiteering inspired by The Beatles.  Bobby Vee compared to Buddy Holly. The first Beatles LP I bought was the soundtrack to A Hard day's Night with the George Martin instrumentals.

The Beatles in California smoking pot with with who? 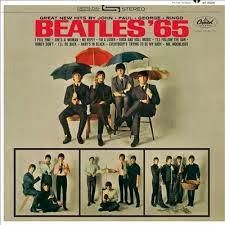 At the end of 1964, The Beatles released Beatles '65,  an LP I loved,  initiating a period of about two years when The Beatles recorded & released the finest series of now classic records ever from a band or artist, from "No Reply" & "I Feel Fine"  to "Help!" & "Paperback Writer," "Drive My Car," "Rain,"  "And Your Bird Can Sing" all the way through Rubber Soul & Revolver.  Beatles 65 made me a real fan \of the band.  It was when rock & roll became rock.  Even the lp cover pix were cool, with the umbrellas. The speed of The Beatles' musical evolution, while under  the incredible pressure  of  needing to produce more "hits,"  touring,  & making two movies, was proof of their genius. Because of The Beatles,  The Four Seasons  made better records, The Beach Boys made wonderful records. The Beatles inspired the creation of The Byrds,  making folk music palatable & hip.   & The Beatles turned Bob Dylan from a rock dabbler into the greatest white American rocker since Elvis.  The Stones would be along as soon as they finished urinating on the gas station attendant, or so the story went.  The Stones or maybe their fan club passed out buttons that said, "Let's Lock Loins."  It became getting more & more difficult for the profiteers to keep a handle on the teenybopper market. Ultimately it lead to the The Monkees. & even they became too uppity. But that was a long way ahead.

At the end of August 1964 I missed my one chance to see The Beatles live. Wasn't a sure thing, but it was a chance.  Another story.

I don't paint a clearly enough picture of the the "Kairos" of the cultural moment, the "right time", a "coming together" (a German theology termI learned three years later in a college religion class), which included John Coltrane; movies A Fistful of Dollars, Pink Panther, Goldfinger, Dr. Strangelove, The Masque of the Red Death; Cassius Clay Vs. Sonny Liston; debut of Terry Riley's "in C" (not released on LP until 1968); the 1965 Democratic National Convention in Atlantic City; plus my dad's only political campaign, won against the Johnson landslide.

Doris said...
Nice. Liked that blog very much. Very nostalgic. Lot of the romance in there that comes as part of the baggage which accompanies musical events to one's life and sticks making one, for better or worse, the person one turns out to be. Was never a Beatles fan (as my blog will confirm - I'm endeavoring to write a daily musical chat for each day of 2014 - there's brave) but have to say that 'Revolver' was an excellent effort at making a connection with British 'yoof'. What I have difficulty in doing (probably because I have hidden shallows) is marrying The Beatles with Hendrix. Both from the same era and yet suggesting two diametrically opposed viewpoints on how to make change...or am I being WAY too presumptuous in putting that onus on them? Hey-ho, such is life lived through the lenses of others; destined to become fogged up and unclear... Doris
2/21/14, 9:20 AM
Post a Comment
<< Home
Contact
Home
Email:
brilliantatbreakfast at gmail dot com
RSS