Brilliant Recent Posts
The REAL State of the Union
Light Dawns on Marblehead
Children's Book Corner: The United States of Bubba
It's easy to talk when you haven't been through it
God Help Us Every One
Sunday Music Blogging: Looney Tunes
The War on Christmas as seen from the Mall Capital...
And now, a holiday greeting from Popeye the cat...
Ducking the Truth: The Real American Dynasty
New York City just elected its most progressive ma... 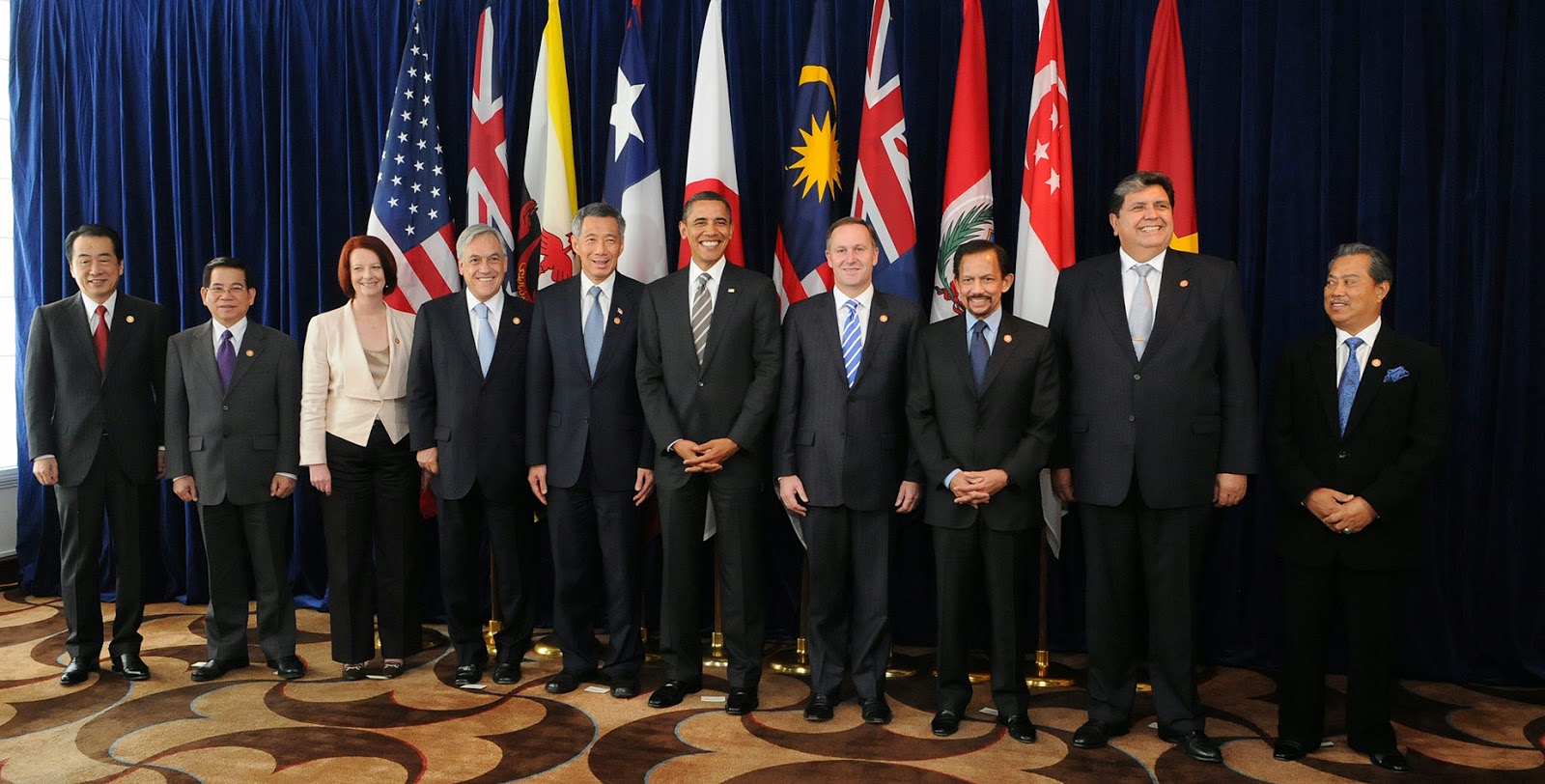 (By American Zen's Mike Flannigan, on loan from Ari.)
It's time I wrote about the Transpacific Partnership, aka the TPP. It's not as if I hadn't known about its existence. But being a political journalist in the 21st century necessarily involves some intellectual triage, in weighing how much attention one scandal should get over the countless multitudes of others. It's literally an embarrassment of riches.
Yet journalists still have a responsibility to the people even if only to justify our remuneration. And it can't be said the utterly worthless mainstream media have been investing much time and effort in educating the public about what is shaping up to be the worst trade deal in human history, one that would put the kibosh on virtually every progressive citizen movement in this and 11 other countries.
Let's start with the typically deceptive moniker: The Transpacific Partnership. That sounds nice and collegial, does it not? The trade negotiators from the United States and 11 other nations, many in the Pacific Rim, stand together and smile for photographs and just want to partner and pool resources for a better tomorrow. It's like a nice endless chorus of Kumbaya sponsored by Brooks Brothers.
And I suspect the mainstream media's typical muteness in the face of these super top secret trade negotiations isn't so much predicated on heavy-handed micromanaging and microediting from the top, or the five corporations who own 100% of our MSM, as much as it's based on apathy. It's not sexy like Philip Seymour Hoffman's death or Justin Bieber getting arrested for drunk driving, George Zimmerman's latest clown show or Kim Kardashian's newest pair of platform shoes. There's nothing to see here, folks, and despite the spirited rounds of Kumbaya in this buttoned-down version of the "We Are the World" All Stars, no one really wants to hear the details about the TPP agreement.
Of course, that may have something to do with the fact that the minutes of these meetings and the particulars are kept more tightly under wraps than the last eight episodes of The Walking Dead. The American people are reduced to fumbling for clues through leaked documents like the three blindfolded Chinese men feeling an elephant. But this trade deal is so incredibly toxic for democracy and to basic human rights that even small samples of the specificities are enough to alarm anyone who posesses a modicum of reading comprehension.
Perhaps most troubling, aside from the legal immunity it would give massive corporations such as those in Big Ag and the enormous influence it would have over net neutrality (as if the FCC's recent decision on it hasn't already buttfucked that back to the age of the ARPANET) is that, as far as our country goes, the greatest dangers of the TPP poses are being accelerated by Max Baucus like drunken, suicidal train engineer determined to kill everyone on the train knowing the bridge up ahead is out.


"Close Your Mouth, Ears, Eyes, Nostrils and Vote!"
About a month ago, Max Baucus, the fabulously corrupt Montana Senator who, if he was honest about his Big Business-friendly agenda, would be wearing more corporate logos on his clothes than a NASCAR driver, introduced Fast Track. Fast Track would essentially strip his fellow lawmakers of any power to change the TPP if and when it comes up for vote. Without being privy to all the information they'd need for an informed decision, Fast Track would allow Congress to merely vote yes or no, not to change any particulars. To pack my argument even more tightly, it would basically allow trade representatives chosen by and bought off by multinational corporations to set trade policy affecting the United States rather than our elected officials. To break it down even further, in case you don't see where this is going, it subverts the very democratic process. One other fact to consider:
No fast-tracked trade agreement has ever failed to pass in Congress.
And not only is the senior Senator of Montana OK with this, so is the other pro-corporate Democratic boob standing in the middle of the lead picture. Barack Obama, a man who's never met a corporation he didn't want to French kiss and dry hump, has been brokering this massively collusive deal since last year knowing damned good and well it would do an end run around our entire legislative branch. The President not only sat in on some of the negotiations, he even imposed a December 2013 deadline for the TPP negotiators to settle on a final agreement. They did not. The talks bogged down in Singapore over details concerning protections for agricultural products.
The momentum for TPP is still powerful although Congress is largely left in the dark concerning the specifics and the American people much moreso, making Obama's early pledge of a supremely transparent government sound as sarcastic as the very name Transpacific Partnership. But the momentum, with the breakdown in Singapore, has been stalled and all hope is not lost. The other thing the MSM have failed to report on are the continent-wide protests that have been taking place this winter in major cities as well as small towns such as Red Deer, Alberta, Canada. Activists opposed to the TPP have been going after craven Democratic and Republican congresspeople still sitting on the fence, including Nancy Pelosi, who are still sticking their hazel snouts in the air like the maggots they are to see which way the wind blows. To his credit, Senate Majority Leader Harry Reid has installed his erstwhile spine and has pledged to oppose a fast-tracked TPP vote reaching the Senate floor.
Like the XL pipeline, it's hard to see how much good this partnership will do the American people, even given the scant information that's been leaked to us. However, one must consider the eternal truism that, if it did indeed promise great things for our nation, the highest levels of our government who are privy to its particulars wouldn't be keeping it a state secret and would be crowing about it from the gilded marble dunghills of the Capitol.
In 11 months, Max Baucus will be nothing more than a bad memory and an old man smell in the Senate. But Baucus is only trying to speed along the birth of a Frankenstein monster. This dark collusiveness was conceived at the highest levels of our government and the push to ram TPP through the halls of a neutered Congress will continue long after Baucus' retirement.
1 comments

The New York Crank said...
What ever happened to Woodrow Wilson's "Open convenants, openly arrived at?"