Brilliant Recent Posts
None Dare Call It Climate Change
I hate it when I'm right.
Our Mr. fucking Brooks
Dear Imaginary Senator Shannon
Caturday, or No Matter How Cute You Are There's Al...
Joe Paterno in an alternate universe
Willard and the Kobayashi Maru
My tinfoil hat is tingling
Everything you need to know about Willard Rmoney i...
Sometimes Willard can't hide what he is


Ann Romney is the Genuine Article
Posted by jurassicpork | 12:25 PM 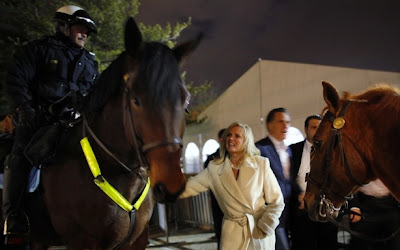 (By American Zen's Mike Flannigan on loan from Ari Goldstein.)

Romney can’t even be mean with any honesty. Even when he’s pandering to viciousness, ignorance and racism, it comes across like a scaly calculation. - Matt Taibbi, Rolling Stone, July 13, 2012

In "Romney's 'Free Stuff' Speech Is a New Low", my colleague Matt Taibbi at Rolling Stone hit upon an important observation about just what a reptilian triangulator Mitt Romney truly is. It's easy to think he's hit the bottom of the barrel and gotten as fundie/corporate/racist as an alleged human being can get before autonomic reflexes shut down to preserve the rest of the species. That is, until you peel back the onion as Taibbi had done and realize that at the bottom of Romney's excuse for or presumption of a soul, underpinning all that faux outrage and viciousness is nothing but empty ambition, an overmastering desire to be something instead of doing something.

As the old mob saying goes, "It's just business. Nothing personal." The same could be said for Romney's recently extended time at Bain Capital, the private equity vulture firm he'd founded that he simultaneously wants us to look at as proof of his fitness and qualifications to lead America yet from which he's trying to retroactively run like a whipped cur to the point of quite possibly falsifying reports to the SEC regarding the length of his tenure and then lying about that. When Romney laid off tens of thousands of workers and sent their jobs to sweatshop countries like China, I'm sure it wasn't personal, either. In fact, it's perfectly plausible that Romney never took the time to learn the name of a single one of those employees that he and his firm had victimized by cutting their pay and benefits or outright outsourcing their jobs. It was cold-blooded avarice.

Ann Romney is something different altogether. Ann Romney is also ambitious, someone not content with having etched on her tombstone just, "First Lady of Massachusetts, 2003-2007." She's already measuring drapes for the White House just as surely as Willard's calculating where to put his framed portraits of Joseph Smith and Brigham Young in the Oval Office. Yet, while Willard comes across as the ultimate empty suit, his wife Ann is the genuine article: A truly vicious and calculating Republican wife who would make Mamie Eisenhower and Pat Nixon look like Michelle Obama or Jacqueline Kennedy by conspicuous relief. 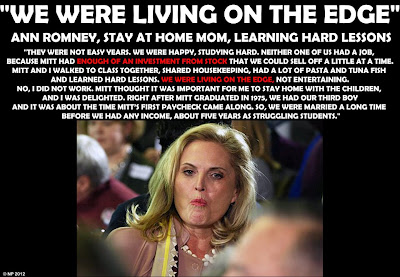 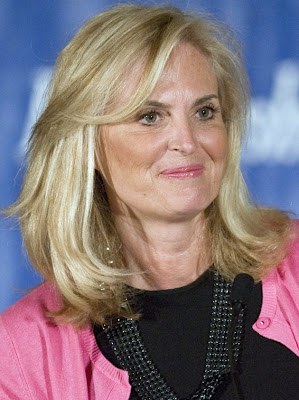 One could merely look into her shark-flat eyes, at the arrogant set of her mouth to know that she's perfectly aligned in her absolute, utter contempt of the poor and middle class with her husband's supporters, one of whom recently telling an LA Times reporter,

(Understandably, that Marie Antoinette wannabe preferred to remain anonymous, as did many of the other Romney supporters skulking into a Hamptons fundraiser in their SUVs and BMWs. Another said of Obama, "He's just a politician, an emperor with no clothes." So, essentially we're left with a choice between an emperor with no clothes and his exact analogue, a vulture capitalist who's nothing more than an empty suit.)

Ann Romney proved once again her perfect alignment with this, "Let them eat me" mindset by telling ABC News recently, "(W)e've given all you need to know" about the Romneys' finances. In other words, there's nothing to see here, peasants, so go back to your foreclosed homes and homeless shelters.

If ISO had a standard for rich assholes who synonymize wealth with education, intelligence and awareness, Ann Romney would share it with her husband's supporters. This is a woman who not only owns dressage horses for "therapeutic" purposes, but her husband who's a quarter of the way to becoming a billionaire is such a grasping, avaricious scumbag that he squeezed another $77,000 out of the American taxpayer by getting the IRS to somehow qualify the horse as a tax writeoff (the horse also enjoyed better health care than the average American).

Besides siphoning even more money from other privileged sociopaths, Ann Romney will not sway the outcome of this election one bit. But not enough people are calling Ann Romney on what is obviously a viciously defensive mindset toward anyone who dares to criticize her ill-gotten wealth and the fact that her dressage horse had more money spent on its health care than the average American can afford to spend (and in America, we pay more for health care than any other nation on earth). And that's because wealth is always more prone to be a spectator sport than it is a ripe target for the 99%.

Willard Romney seems to have found himself in both an enviable and unenviable position. To liberals and progressives, Romney has become a loathed venture capitalist who's bankrupted companies, put people out of work or, at the very least, cut their pay and benefits. But it doesn't matter what the unwashed liberals think to Romney any more than it did to Obama when nearly two years ago he took swipes at us from a $30,000 a plate fundraiser at a gated mansion owned by some guy named Rich Richman.

The enviable part is because Willard Romney is so corporate, he embodies capitalism and the free market so perfectly that pro-corporate people like Obama and influential Democrats get the dry heaves at the thought of taking devastating body shots at Romney's Bain past because that would be like poo-poohing capitalism itself. And what red-blooded American would do that? Hell, even the guy who'd produced, "When Mitt Romney Came to Town" for Newt Gingrich is now having pangs of remorse for starting a trend that he fears will continue.

Ann Romney is the exact opposite: A true blue-blooded cunt in every sense of the word proactive.
7 comments

Beleck said...
it was a little disconcerting to see the words she used. Marie Antoinette double without a doubt. scary to think she's got a shot at being First Spouse or first anything with that kind of attitude. obviously inbreeding diminishes grey matter. or money co-opts the ability the keep the foot out of the mouth disease.

it does appear though, the Romneys are the "shining" star of the Elites. boy, does this ever sound and look like a prelude to a Bastille Day happening here. obviously, money doesn't buy class or eloquence.

e.a.f. said...
The romney's are so far removed from everyday life they don't have a clue. Ms. Romney's comments are hilarous. I can't believe the woman actually said it.

The deduction for the horse was just icing on the cake. Most Americans don't even make $77K a yr. much less be able to claim that amount as a tax deduction. It also clearly demonstrates what is wrong with the American tax system, deductions for your hobby horse, give me a break.
7/20/12, 11:23 PM

Anonymous said...
at a gated mansion owned by some guy named Rich Richman.