Brilliant Recent Posts
Only in minds like Andrew Breitbart's is this enou...
She's ready for her close-up, Mr. DeMille
The Shame of Seamus
But hey, it made Michael Chertoff rich
Speed Dating With Willard
The Republican answer to everything: Cut Taxes an...
"I Don’t Even Consider Myself Wealthy."
OK, enough with the gravitas, class and decency
I wonder if people in towns hit by tornadoes still...
Blogrolling In Our Time 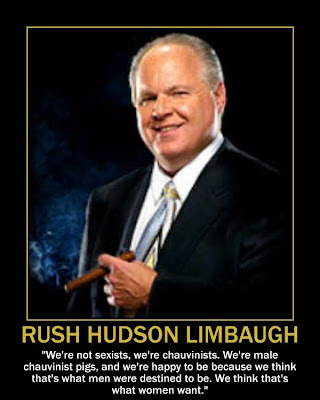 (A fantasy in honor of International Women's Day.)

Interior: Rush Limbaugh's home radio studio. His face is ruddy and creased in a vicious smile and he leans into his gold-plated microphone.

"We're back and apparently, as if Mother's Day and Valentine's Day isn't enough, I learn that today is International Women's Day. Think about that, people. International. Women's. Day. A day when feminazis all over the world unite and ovulate simultaneously, a day when even ugly women can be beautiful. I'm taking calls now and here's our first one from... Lisbeth Salander. What the hell kind of a name is that? Hello, this is Rush Limbaugh, talent on loan from God."

"I'm coming for you, you corpulent, child molesting fascist."

"Excuse me? OK, folks, it appears as if we're hearing from another moonbat liberal..."

"You've been denigrating women long enough. Taking out your sponsorship isn't enough. The world is already full of enough misogynists."

"OK, Miss Salander. I can already guess what your agenda is. You're still peeved about that Sandra Fluke thing. But it's over now. You've had time to deal. Get over it."

Closeup of Limbaugh reaching for the kill button.

"Reach for the kill button. It won't do you any good."

Rush turns around and sees a short, skinny woman directly behind him. The last thing he sees is a blue electrical arc before falling off his chair in a paroxysm of agony. Lisbeth Salander folds her cell phone and leans over him. Fade to black.

Next scene: Limbaugh is on his stomach, completely naked. Still in his broadcast booth, he's gagged and his wrists are bound and leather straps are connected to his ankles. Salander walks around his body in a circular fashion, her face frighteningly made up with dark cosmetics.

"So, women are sluts for merely complaining about an attack on their access to health care and birth control, eh? You know what, Rush? You remind me of my father. He used to beat my mother until she was practically a vegetable. Do you know what I did to him, what I do to men who hate women?"

"What's that? I can't hear you?" (She stuns him on the ass, then rolls him over and stuns his genitals. Frustrated, she looks at the taser's meter and realizes she needs to let the capacitor recharge.) "Well, it appears as if I have to wait a few minutes for this to recharge. What's that, you sexist pig? I can't hear you." (Salander kicks Rush in his withered testicles then lowers the leather gag.)

"I'm not a sexist. I'm a male chauvinist pig because deep down, you over made-up slut, that's what you want."

"Really, now?" (Salander kicks him in the balls again.) "Let me explain one thing to you. You speak to me without permission, I'll use this on your monkey balls again, you hear?"

"Blow me, you slut. Do you have any idea who I know, how much money I make?"

"Do you know how many tens of thousands of volts this little thing contains? Oh, look, it's recharged." (Salander tases Rush in the scrotum yet again and the broadcast booth is filled with the sounds of his agony.) "Now, shut the fuck up and listen to me. You speak to me again without permission, I tase you. You even look at me, I will tase you. Do we understand each other? Is that a nod? Good."

Pan out. Salander now walks toward Limbaugh's desk and disengages the gold-plated microphone hanging overhead. She then reaches into a rucksack and extracts a bottle of lubricant.

"I think I finally found a more appropriate use for this, you egotistical swine. You have used this microphone to launch venom against women, minorities, everyone who isn't white, male and right wing. Sweden is full of pigs like you."

"Did you just speak to me?"

"No, no, I was talking to my... AGH!" (Salander then kneels and abruptly shoves Rush's gold-plated microphone through his rectum, then twists it clockwise and counterclockwise to good effect. The entire broadcast booth is immediately filled with the stench of urine and offal.)

"I would think you would like this, considering you were all for enhanced interrogation techniques when Bush was still President." (Salander pulls the ball gag back into Rush's mouth.)

"Now, today is International Women's Day. In honor of today, you're going to pull that microphone out of your ass, lick it clean then apologize, and I mean really apologize to Sandra Fluke and every woman you've ever insulted on this piece of shit show. You will do this every day your show is on for the rest of the month. Fail to do this, I will be back. Now sit still and stop struggling... I've never done this before."

Exterior shot. Salander then reaches into her rucksack again and pulls out a tattoo artist's needles gun and fills it with black ink.

"Did you just speak to me? Do you not understand the rules?" (Salander stuns his testicles again.) "Now lie still, you fat fuck." (Amid muffled screams, Lisbeth Salander then draws a crude but recognizable face on Limbaugh's extremely ample torso. She stand up and admires her handiwork.)

"This is just to serve as a reminder of what will happen to you if you fail to honor even a single one of my conditions. You fail to apologize to all women every day your show airs this month, I'll be back and I'll fill in the details. I did this once. I can do it again." (She then points to the room beyond the glass. Limbaugh struggles to look and sees his producer out cold in his chair.)

"And not only will I do that, I'll also release a certain DVD that I shot of you during your little trip to the Dominican Republic with your right wing buddy Joel Surnow. It's obvious you like children because they make your withered, flaccid penis look bigger."

"Did you just speak to me again?" (She tases his testicles one more time before kicking them.)

"And, just for the record, my journalist friend Michael Bloomqvist is writing an expose about Clear Channel, so I'd update your resume, if I were you."

(Exterior shot. Salander then admires her handiwork one more time before reloading her rucksack and exits the broadcast booth. Rush looks down at his ample torso and screams when he sees the crude likeness of Rosie O'Donnell. Fade to black.)
2 comments

D. said...
Bit of a revenge fantasy there, what?