Brilliant Recent Posts
It's a hack. It's not funny. And why is it still...
Around the Blogroll and Elsewhere: Is This What I...
In case you thought the expression "Republican war...
Their tentacles are everywhere
...And Justice For Gaul
I could get behind this
I think we all know how this is going to play out
He is SO much a closet case
A governor's job is not to be "fan-in-chief"
A Hint of Why Bernie Sanders is Our Best Living Se... 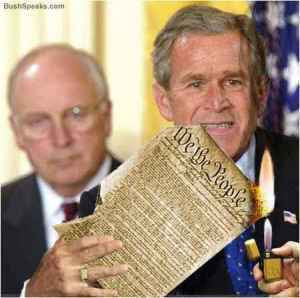 "I support my country 100% of the time and my government only when it deserves it." - Mark Twain

As with all too many of us, my landlord trots out his American flag and hangs it over the porch he shares with one of his tenants to prove his patriotism once a year. It hangs limply since that section of the property hardly gets a breeze. It's tattered and the colors faded.

It's almost too easy to look at this Old Glory that's seen better days as a synecdoche of what's happened to our Republic and Democratic system of government that's been so buttfucked, bought-and-sold and perverted from its original intent that the Founding Fathers wouldn't recognize their ultimately failed Great Experiment.

In spite of all Americans, liberal, conservative and in between, black and white, brown, yellow and red, young and old all openly and proudly declaring that we are not with the terrorists but against them, the terrorists have won. Because al Qaida allegedly got astoundingly lucky one day almost a decade ago and supposedly pulled off the greatest terrorist attack on US soil ever with a handful of box cutters, because of this the terrorists have won.

They've won because life no longer much resembles pre-9/11 America. Most humans being sheep, we are still susceptible to our government's fear-mongering. Most white humans being craven, we're not happy unless we're fearing and hating some race with skin darker than ours and now the flavor of the day is the Muslim.

Despite bin laden being dead, our own Transportation Security Administration recently announced it was ramping up the public molestation of our children 12 and under. A 95 year-old woman was recently forced to endure having her adult diaper removed by the TSA. If you live next to a ballpark, make sure you get there at least two hours before the first pitch since everyone will have their bags checked and have to pass single-file through a metal detector.

Then we can forget all that indignity by singing in unison the National Anthem while stadium security carefully watches out for anyone still wearing their hat and "God Bless America" in the 7th inning stretch.

Yes, many of us have proven our patriotic bona fides (with manic, Orwellian fear during the "You're either with the terr'ists or against 'em" Bush years) yet no matter how many rights we freely give away and allow to have taken from us, our government and local law enforcement still looks at us as 300,000,000 potential terrorists and criminals. 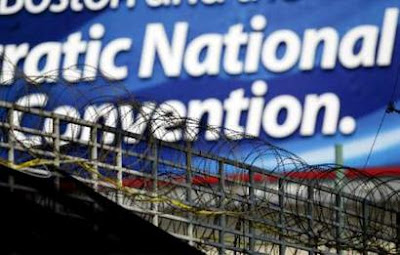 Nearly seven years ago, the Democratic Party, not the Republican Party but the Democratic Party in Boston during their convention set up "free speech zones" far enough from the Fleet Center to guarantee no one would hear the "free speech" of the protesters as they were temporarily incarcerated in what were called (and I swear, I am not making this up) "Freedom Cages"... 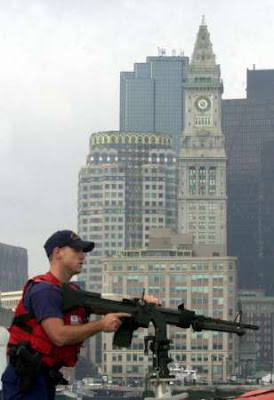 ...carefully watched from above by Boston City police snipers.

It goes without saying that the GOP, not to be outdone by the Democrat party, had dozens of journalists arrested during their own convention in Minnesota four years later. That was a great day for Minnesota law enforcement since it produced a bumper crop of over 800 arrests mainly just for being in the wrong place at the wrong time or committing the unpardonable sin of dissent.

And how many of us still remember that KBR, the former Halliburton subsidiary, was given $400 million to build detention centers all over the country? If you forgot, you're excused. No one's written about it since Feb. 2008.

This is just a taste of the erosion of our civil liberties that had transpired during the previous administration. Entire multi-volume books can be written on the subject, with the Bush administration earning a volume of its own. But things have hardly gotten any looser and those of us paying attention don't feel much freer or braver since Obama took over.

Because the Obama administration, as with the Bush administration in the aftermath of Katrina, paid Blackwater $70 million just weeks after the inauguration to kill brown people. It goes way beyond irony that every single administration in recent memory employs criminals and corporations charged and even convicted of criminal activity to keep 300,000,000 potential criminals in line.

They no longer need to suck up to us for campaign contributions because they know Citizens United guarantees they can vacuum all the cash they need from self-dealing corporations. But they still have to suck up to us for votes and all too many of us forget there are a lot more of us than there are executives and even lobbyists.

I can tell you not to vote for Obama and make that closet Republican a one termer like HW and you'd counter that the only other choice would be a Republican and we'd be even worse off. And I could counter that there's no distinction between the parties and what the fuck's the difference between living in the 8th or 9th Circle of Hell?

I'm not telling you to enjoy today, to not fire up the grill in the back yard, drink beer on your property and take the kids to a fireworks display tonight. You're going to do that anyway regardless of what I say. I just want you to remember that being able to grill and drink in your back yard and see a fireworks display are among the few freedoms we have left and to enjoy them while they last. Because these basic rights have been taken away from us for decades and, to put it charitably, Obama's doing nothing to reverse that trend. 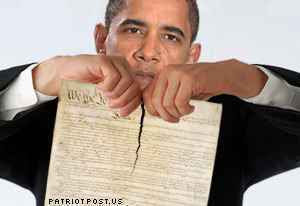 Meet the new boss, same as the old boss.
7 comments

This will not stand. After trying all other possibilities to avoid it, USA will eventually do the right thing. The war criminals in government will have to be brought to justice.

Questions for Mr Obama and the Democratic Party,
"At what level of government does a person become above the domestic and international law?"
"Does the above the law protection extend to the Supreme Court?"
"Are Secretary of Defense level civilian and military personnel exempt only as long as they are in USA?"

Rose said...
No, Obama isn't the same as the old boss. He gave us the Health Care Reform act, which NO Republican wanted. He' pro-choice re: abortion. He
refuses to "privatize" Social Security and he's not destroying Medicare. He's also pro-stem cell research. If Democrats like you vote for a "third party candidate," then Magic Underwear Romney might win, and he's just like the Old Boss---Bush!
7/5/11, 1:00 PM

Anonymous said...
Well, President Obama lost me when he had that homophobe two-bit preacher give the invocation at his inauguration.

I was sure right then that he was just going to be Bush III.

Rose said...
Jurrasic Pork, you should join the Tea Party. Your hatred for Obama is so severe, you sound like one of them. Hey Jill, I'd hate to see your blog turn into a "We Hate Obama" blog. Obama is far superior to any of those Republican clowns. Do you want a guy who wears Magic Underwear and thinks black people are descendant of "Cain" to become President? Because if you don't support Obama, then you WILL get Romney.
7/6/11, 1:08 AM

jurassicpork said...
Rose... Oh my God, I don't believe I have to actually say this to a so-called rational adult.

The Tea Baggers hate Obama because they've been brainwashed by Dick Armey's FreedomWerx into believing that he's a Socialist and Communist who wants Big Gubmint to take over health care.

My criticism of Obama is more rooted in reality and I don't criticize his policies because I think he's an ultra liberal leftist (God, if only). I criticize Obama and his policies and him taking potshots at his base for being virtually indistinguishable from the last assclown before him.

My God, woman, I could go on and on and on but I would think since you frequent B@B, a political blog, you'd be better informed and that I wouldn't have to.
7/27/11, 4:42 PM
Post a Comment
<< Home
Contact
Home
Email:
brilliantatbreakfast at gmail dot com
RSS