Brilliant Recent Posts
I could get behind this
I think we all know how this is going to play out
He is SO much a closet case
A governor's job is not to be "fan-in-chief"
A Hint of Why Bernie Sanders is Our Best Living Se...
If only we could be sure that her entire campaign ...
Another reason not to fly unless you have to
It All Started at Stonewall
Remind me again why we're supposed to support Demo...
Than Give You Control 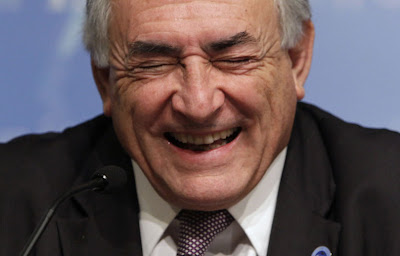 “Our concern is that the Manhattan district attorney is too afraid to try this case.” - Kenneth P. Thompson, counsel for the plaintiff

As has been noted many times before, fortunes and misfortunes in the political arena in the age of digital media and 24/7 news cycles occur with frightening rapidity. The potential for success or failure, for scandal or redemption, whether deserved or not, has never been higher since former president-elect Al Gore invented the internets. And we've perhaps never seen a more vivid delineation in how rapidly one can be snatched from the jaws of destruction and placed back on their pedestal than in the circus surrounding former IMF chief and accused rapist Dominique Strauss-Kahn.

This case contains more drama and twists and turns than John Grisham could fit into a legal thriller. We have an accusation of rape against a presumptive future head of state, we have a discredited witness, we have a suddenly embarrassed District Attorney whose political ambitions are now shakier than that of the defendant's, we have Strauss-Khan's native France's full support, we even have an inflatable Statue of Liberty and early 4th of July independence wishes. This sad, sorry clown show makes the OJ Simpson murder trial of 1995 look like a dignified model of jurisprudence by conspicuous relief. And it hasn't even gone to trial, yet. And, by the looks of the tails tucked between Manhattan prosecutors' legs, it never will.

There seems to be little to no doubt that the star witness, the maid who insists she was raped by Strauss-Khan on the 28th floor of the Sofitel New York hotel, has repeatedly lied in other matters or been inconsistent at best with her account of being sexually assaulted. Anyone who's ever watched an episode of Perry Mason knows that in the world of jurisprudence, so much depends upon the credibility of witnesses and plaintiffs.

And while destroying the credibility of a witness or plaintiff is the fastest way to win a case, in many cases it becomes a witch hunt with your more aggressive attorneys who know they cannot prove their clients to be not guilty. The rules of the legal game always has within it an enormous potential for abuse and the innocent get destroyed in court five days a week, 52 weeks a year while the guilty (such as Simpson) walk out of the courthouses with broad smiles on their faces.

What passed over the heads of the three NY Times reporters who contributed a pair of page one, above the fold stories in today's edition was why this woman had to lie about certain things. In a word, it's survival.

She had to lie about being gang-raped in her native Guinea to get into and stay in this country. She had to lie about having another dependent in order to get a slightly bigger tax refund. She had to allow her bank account to be used as a little money-laundering operation for her jailbird fiance and his friends, all drug dealers.

If Cyrus Vance Jr's office were to ignore these revelations, he'd likely be impeached or perhaps even disbarred and his political career would be deader than his father's. I think we all get it.

But this maid accusing Strauss-Khan of rape (and some of the forensic evidence could lead one to believe something non-consensual could've taken place) and Strauss-Khan himself is an unexplored case study in opposites, one that delineates better than any story currently serving as fodder for the MSM in the difference in how we treat the wealthy and powerful and the poor and powerless.

Strauss-Khan is now a free man who can travel anywhere in the United States without notifying the prosecutors, his bail greatly reduced, his posh and cushy house arrest in lower Manhattan now lifted, his ankle bracelet removed and if he wanted to launch a presidential campaign against French President Sarkozy, he'd once again stand a good chance of winning (and don't think for a minute that Strauss-Khan wouldn't play up the martyr angle and set himself up as the 21st century's answer to Joan of Arc).

Manhattan DA Cyrus Vance, Jr., on the other hand, has, because of the wealth and power of the defendant, is on the verge of joining Anthony Weiner on the unemployment line, his own political career virtually in tatters. Considering the prosecution did not protest the reduced bail, it's obvious at this point that Vance is, unlike Strauss-Khan in that hotel room, looking for a dignified exit. It's a foregone conclusion this case will never go to trial.

The plaintiff-turned-defendant, the victim, will surely, if she hasn't already, lose her job and possibly face jail time for lying about her taxes and immigration status and will very likely get deported along with 800,000 others in the Glorious Age of Obama, her hopes and dreams of making it in the United States completely destroyed.

It's the classic case of the boy who cried wolf except in this case it's a girl, one who's been living a borderline criminal life in the interests of survival and the wolf just happens to be the presumptive next President of France and former head of the IMF. But while people are sending him balloons shaped like the Statue of Liberty (an inflatable shark with a fish in its mouth was turned away at the townhouse) and bemoaning how he was victimized by having to give up his IMF post, hardly anyone save for the woman's attorney, Kenneth P. Thompson, seem to care about the potential and likely fallout that'll be suffered by the complainant. Suddenly, we're not hearing so much about the compelling forensic evidence, about Strauss-Khan's extremely suspicious behavior (he left the hotel in such a hurry after the rape, he left his cell phone behind).

Once a liar, always a liar, is what we're hearing from the MSM. "If she lied about her immigration status and on her tax returns, then she must be lying about this" is the unspoken consensus. Yet, while it's true that she sought to profit from this (as per the transcript of a recorded conversation she'd had with her self-serving fiance in prison, who put the idea in her head), it's notable that the prison visit reveals the rape to be a matter of fact and not some hoax or conspiracy to extort a vast sum of money from a powerful, wealthy and innocent man.