Brilliant Recent Posts
If only we could be sure that her entire campaign ...
Another reason not to fly unless you have to
It All Started at Stonewall
Remind me again why we're supposed to support Demo...
Than Give You Control
Let the Sun Shine
The New York Times really, really, really, really ...
Hilarious.
Richard Milhouse Obama
But the only stories deemed newsworthy by our medi...


A Hint of Why Bernie Sanders is Our Best Living Senator
Posted by jurassicpork | 11:26 PM

For those of you who'd missed it on TV today, this is but the mere preamble to Bernie Sanders' second orgasm of outrage of 2011. If you have the time and patience to read his entire speech, you can read it here.

There's not really much that a layman like me can add to this without descending into mere opinionating and commentary but let's break down some of the numbers of Sen. Sanders' proposed 13 part plan for reducing this supposedly runaway deficit. 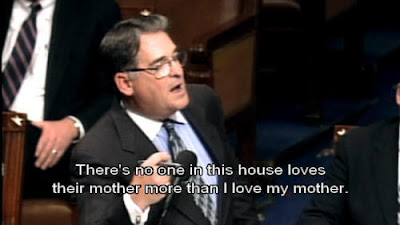 Bartender Cabbie said...
Totally agree with number three. Not sure about number nine. I am trying to get on at Halliburton and want to see them keep up the "war proiteering." All about person finances you see.
6/28/11, 4:58 PM

Anonymous said...
I've read the entire Sanders letter to Obama and signed the petition. I hope that everyone here will sign on. You won't need to read all of the Sanders statement to realize that he is the ONLY honest person in the Senate.
On the subject of floating palaces for the wealthy: bring them on! Who will insure proper sanitation and food and waste handling? Ever hear about those disease outbreaks on the big cruise liners? Who will protect them from pirates, terrorists and hurricanes?
You can bet they will demand that the US government come rescue them the first time they take on water.
Let them sink to the bottom, then send James Cameron down to film the wreckage.
6/29/11, 8:29 PM

Arthur Mervyn said...
I agree with everything, but "corruption, waste and outright fraud" are usually code words used by the GOP when attempting to cut non-defense spending (such as for social services).
6/30/11, 7:17 AM

Bartender Cabbie said...
Sanders is to the left as Ron Paul is to the right. They are liked in theory but they frighten people.
7/1/11, 7:39 PM

Bartender Cabbie said...
I might also add that both Paul and Sanders are refreshing in many ways. Whatever one may think of them; I get the feeling that they say what they mean and mean what they say. How rare is that among the scum in DC.
7/2/11, 9:21 AM
Post a Comment
<< Home
Contact
Home
Email:
brilliantatbreakfast at gmail dot com
RSS