Brilliant Recent Posts
Why Jamie Dimon Needs to Go Fuck Himself With a Mi...
Women on the Sunday Morning Sausagefest should be ...
The reaction from Florida
Saturday Big Blue Smurf Blogging: What They Said
Lurch Meets Eddie Munster
Caturday
Yes, let's choose for VP a man who doesn't know th...
Brilliant at Blegging
Around the blogroll and elsewhere: Dispatches fro...
He's in the apple pie, too.


Goodbye, Johnny
Posted by jurassicpork | 9:30 AM 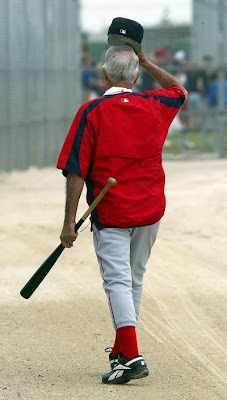 He was always so nice to me throughout the years. Every time I’d see him, he would come over and say, "I hope you get four hits today -- and the guy behind you hits into four double plays." Derek Jeter, Yankees shortstop

In a way, during his first three seasons in the major leagues, Johnny Pesky was a better hitter than Ted Williams. Because in each of those three seasons (1942, 1946 and 1947, minus three years of naval service during WW II), Pesky did something that Ted Williams never did: Getting over 200 hits. Now, you could say that was because the much more fearsome Splendid Splinter got more intentional walks and you may have a point. But even during what was arguably Williams' best season (1941, one in which he became the last man to hit .400 [.406]), the Red Sox' little rookie shortstop got more hits. In fact, he got 620 of them his first three seasons, hitting .331, .335 and .324.

Sure, Teddy Ballgame had a higher batting average than Pesky during those three years and certainly hit more homers (Only 12 of Pesky's 17 career home runs were hit for the Red Sox and half of them were at Fenway). But while Pesky's uncanny abilities as a table setter for the big boppers like Williams couldn't be denied, he did something the waspish Williams never had a prayer of doing even had he wanted: He endeared himself to fans, players and the press alike.

John Michael Paveskovich actually came to the Red Sox organization at roughly the same time as Williams. Starting out as a kid right out of high school working in the cramped clubhouse, the veterans of the club often made fun of Pesky and his dreams of being a big league ballplayer. They never took him seriously until one day the little shortstop's hard work and dedication paid off and he was signed to Tom Yawkey's Red Sox in 1940, debuting on April 14, 1942.

70 years later almost to the day, Johnny Pesky made his final public appearance at the 100th anniversary celebration of Fenway Park's opening. Even the spry little middle infielder's legs gave out on him and he had to be wheeled out by recently-retired backstop Jason Varitek. Yet with all due respect to the surviving superstars of Red Sox history who'd made it that day (Pedro Martinez, Tim Wakefield, Varitek, Luis Tiant, Jim Rice, Dwight Evans, Yaz and Pudge Fisk, who would have the opposite outfield pole informally named after him), it could be said without much argument that Pesky's appearance was the most significant and he was perhaps the most beloved ballplayer on that crowded diamond. It could even be said that Pesky had inspired at least as many tears as when Teddy Ballgame was rolled out just prior to the 1999 All Star game at Fenway Park.

That's because Johnny flawlessly embodied the sentimentality that distinguishes baseball from all other sports. Pesky was our version of Buck O'Neil, who was a ballplayer for the Negro League and a legendary scout for the Cubs and, later, the Royals. Both men lived into their 90's and, as sweet old baseball men often do, mellowed and got better like brandy. Pesky seamlessly transitioned between player, manager, coach, front office executive into goodwill ambassador. Johnny is the only man I can think of who'd literally worked his way up from being towel boy to executive within the same club.

In the age of free agency, in which players are rightfully expected to switch allegiances and erase old loyalties with every trade, Pesky never forgot where he came from. One of the most moving books ever written about baseball (and one of my alltime personal favorites) was the late David Halberstam's The Teammates. If you haven't read it but are wisely willing to give it a try, it chronicles an epic road trip Halberstam had taken with Pesky and Dom Dimaggio to visit a dying Ted Williams in Florida. And, as someone who's written a buddy road book of his own, I can tell you it has the makings for a wonderful motion picture.

It can't be said that Pesky saved baseball from scandal and disillusionment as did Babe Ruth and, 80 years later, Mark McGwire and Sammy Sosa. But Johnny more than did his part to preserve baseball from being tarnished by effortlessly reaching out across the generational gap and giving kids a glimpse into a bygone age before free agency and bloated salaries, Balco and steroid usage and egos and coddled tycoons who refuse to even make eye contact with the fans who made them obscenely wealthy. Fortunately, we won't be saying, "Johnny I Hardly Knew Ye" because Johnny made himself freely available to anyone who listened to his endless stories and the occasional tip about the baseball life.

As proof of this, when Johnny toddled off into Ray Kinsella's cornfield yesterday afternoon, 19 year-old boys wept. Those are the real fans and Johnny had as infallible a knack at finding them as he did holes in the infield.
1 comments