Brilliant Recent Posts
The misogyny of Republican men knows no bounds
You Remember Me Tomorrow
The Toy Cop is on Sale
The Wilpons must be made to sell -- all of it
The Bastards of Goebbels
It could be worse
The Insane Clown Posse is in Town
This about sums it up.
Would it be irresponsible to speculate? It would ...
A stand-up guy in Flushing 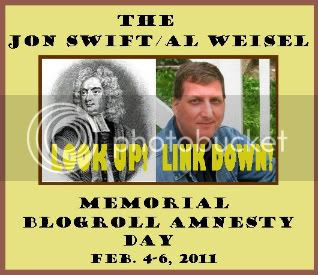 This year's Blogroll Amnesty Day is a bittersweet one, because it is the first one without the blogger who inspired it all, the late and will-always-be-lamented Al Weisel, a.k.a. Jon Swift. It all began in 2007, when the Big Blue Smurf To Whom I Do Not Link decided to purge his blogroll of all but the "elite" bloggers like himself. How a guy whose idea of blogging is to post "I have a headache" under the title "Afternoon thread" became an arbiter of the elite, generating tons of traffic and comments, is just something we file away under the heading of "Life Ain't Fair." So in Smurfville, blogroll amnesty became just another word for Purging the Kool Kidz Klub of Those Who Are Not Worthy, whereupon the estimable Mr. Swift decided to take back the concept of "blogroll amnesty" the way I have worked to take back the word "fat" and turn it back into a descriptor instead of a value judgment. Hence his -- dare I say it -- liberal blogroll policy.

And so it was that in 2008, Jon Swift joined forces with Skippy and a REAL Blogroll Amnesty Day was born, complete with a slogan: "Look Up, Link Down." Of course the word "down" can also be fraught with judgment, as if the blogs to which we link are but peons to our royalty, but what it's about is for smaller blogs, many of whom boast much better writers and less whoring for attention from politicians, to join together in a spirit of mutual support. Our intermittent features "Around the Blogroll and Elsewhere" and "Big Blue Smurf Blogging: What They Said" are my way of celebrating B.A.D. all year long.

For all that I've been working 7 days a week, 12 or more hours a day since early December, I have had time to check out a few heretofore ignored or nearly-ignored blogs, which I've just added to the blogroll. I must confess that I lack Jon Swift's generosity of spirit, for what I want to see in blogrollees is not a series of posts that simply reprint, or link to, stuff that others write. I want to see WRITING. It doesn't matter if it's about politics, or pop culture, or cats. If the writing is smart, and it's entertaining, I'm there. So in celebration of Blogroll Amnesty Day, and lifting a glass high in praise for Al Weisel, who enriched the lives of so many people who didn't even know him, here are our new blogrollees:

Liberal Fix (See, Dan? I'm not an ogre after all!)

My Three Cents - by fellow NJ-5 sufferer Adam L, intrepid blogger with one cute kid who somehow manages to write at every blog you can name.

ShortWoman - because we normal-size people have to stick together.

Cookies in Heaven by that OTHER Jill. If there are cookies in heaven, I am SO there.

Batocchio said...
If it didn't have cookies, could it really be heaven?

Unknown said...
Now I didn't really think you were an ogre...much. LOL Thanks for reconsidering. I will be putting up a static page for links to my original writing posts. It would probably be a good idea so they do not get buried. Seriously though, I appreciate you adding me.
2/5/11, 3:54 AM

SantaBarbarian said...
Wouldn't be heaven if there were no cookies there! :-)