Brilliant Recent Posts
Middle America Loses Walter Cronkite
Around the Blogroll and Elsewhere: Because it's N...
The last great American news anchor has died
Pat Buchanan is scared out of his mind
Enough talk of "pre-existing conditions". How abo...
This is what investigative journalism looks like
If 2006 Was 2009
I hate it when Maureen Dowd makes me link to her
I don't know about you, but I could use some kitte...
Tuesday Big Blue Smurf Blogging: What They Said 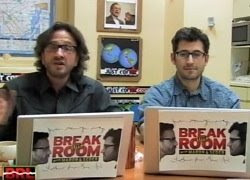 Remember how you felt that time you saw Miles Davis in the mid-1980's when the edgiest guy in jazz had been reduced to playing "Time after Time" in a yellow satin shirt, and then after he died, Mr. Brilliant turned to you and said "He's been dead for years already."

So it is with the company formerly known as Air America Radio and now known as "Those motherfuckers at AAR."

Last Wednesday the final nail was put into the coffin of what used to be something fresh and new and almost daring and exciting when Marc Maron and Sam Seder were kicked in the teeth once again, being told right before the Wednesday Break Room Live webcast that it would be their last one. The current batch of suits at Air America Media have once again fired the only remnants left of when progressive talk radio was something worth listening to. Every iteration of the various people who have gone through the revolving door of a level of mismanagement of that property even more than the Wilpons have managed the New York Mets has made matters worse. When you look at what constitutes the "talent" at AAR these days, it's sickening: Ron Reagan with his jihad against fat people. Montel Williams, moonlighting from his career as infomercial pitchman and shill for Astra-Zenica. Does anyone actually listen to these people? Even Ron Kuby, who is no great shakes as a host himself, has been screwed over by these people.

I wish I could say I was surprised. I wanted to write something coherent and passionate about what these people have done over and over and over again to these two guys who have sweated bullets and given their hearts and souls to try to make Air America work. But I couldn't. Part of it is the ridiculous hours I'm working, but part of it is that I'm just tired of it -- because it's what I expect now from Air America "Media." I EXPECT these people to try to sell me a shit sandwich and tell me it's roast beef with gravy and think I'm going to eat it. So when I found out on Wednesday, there wasn't the sense of OH MY GOD WHAT AM I GONNA DO NOW? that I had when Morning Sedition was cancelled. It was mostly just sadness -- sadness that these two talented and decent men who have so much to offer the sociopolitical discourse in this country and who have built a ferociously loyal community of smart, funny fans that sane management would treasure have been so shabbily treated by a company that seems bound and determined to do whatever it has to in order to fail spectacularly.

This morning I ground the last of a bag of "Angry Chef Happy Coffee" from Just Coffee, the show's only sponsor, and said "I really should keep this bag right next to the Morning Sedition coffee mug as a reminder of what's gone."

And so it is that I really have nothing to say, except thank you, Marc and Sam. Thank you for helping me feel not so lost during my first week in a country where I didn't know the language and didn't know a soul, but where I could turn on my netbook at 9:00 PM (Cologne time) and get a taste of teh funny and teh smart and teh clever. Thanks for your hard and tireless work over the last five years to try to make something work that can't be saved. And now, go forth and make thine own way. We will follow you. If you build it, they will come.

More from Rachel Sklar and the incomparable P.J. Sauter, who still keeps Teh Funny going via his 24-hour loop of Morning Sedition interviews and comedy bits that you can listen to in the right-hand sidebar right here at B@B.

I understand how you feel about the loss of Break Room Live. The only thing I can do at the moment is promise you that I will show your comment to upper management.

Also, here are two statements about the cancellation--one from CEO Bennett Zier and one from Program Director Bill Hess. They were released via Twitter this week:

"For now, the daily live stream of Air America's @BreakRoomLive has been discontinued. Visit your favorite shows here: http://bit.ly/yEZ8Q "

"We love @MarcMaron @SamSeder. They are very talented. We hope to work with them in the future."

Bennett Zier loves Maron and Seder so much he fired them. That's some twisted-ass love.

Christopher Hawes said...
Listened to BRL everyday at work and loved it, just like Morning Sedition and The Majority Report.
So unfortunate
7/18/09, 8:49 PM

spocko said...
I loved the Matt Taibi interview Sam did last week and I wrote him and told him. It pisses me off that they don't appreciate how great Sam is.

One of the things that I hoped I could do was to drive decent advertisers away from right wing radio. They should know that the sexism, racism and bigotry of right-wing radio is not something to associate your brand with.

Air America management made a lot of mistakes and they were up against a group of ruthless people who were happy to see them fail.
7/18/09, 11:49 PM

Melina said...
It seems like the powers at AAR want the payoff now, and they don't care about building anything. It was a good year and hopefully Marc and Sam will do something else free form and independent which people can subscribe to.
It used to be that profits were put back into a growing business, new media ventures were given years to ripen, and there was a chance to build a relationship with your viewers/listeners.

Marc and Sam have been fired and hired and moved all over the place and we have followed them.
What could these bosses be thinking?
Well, they wanted to sell it to TV, as anyone would, but that might have involved letting it grow and mature...it was only getting better (though I missed Sammy in the break room with Marc and would have liked at least some of that back) They wouldn't let it mature so they never could have sold it!

I'm just numb...not surprised...and I hope to god that there is something else out there to bring them back to the public really soon.
I want Sammy to start broadcasting from the bunker upstate ASAP!! Ill pay and I know lots of others will too....
The thing is that Montel and Springer make money because the American public have an appetite for the misfortune of others, and we like to feel superior to those that we perceive as more fucked that we are.
Now that even our laws are in the oil wrestling pit, and the bad guys have won, we are looking towards the future with the promise of a quick recovery and dont look back!...so bring on the dancing girls! Who's your daddy?...DNA results after this message! Don't look back, don't figure it out.

Sometimes I wonder why the truth doesn't sell, even when its stranger than fiction...its not like the republicans couldn't fill the Springer dance card for a season or two with their peccadilloes ...But then,
there is something about yelling sociopaths that go to the exact American pleasure center that a cheating senator doesn't.

Maybe Marc and Sam are not mainstream enough for some people. Maybe the humor is obscure and its all too smart and clever.
But so were Rachel and Keith originally...it took time though, and these are not patient people.

My mom used to say that it was almost as if the neocons had a mole in AAR and were trying to take it down...seems like she may have been right. Its the spirit of the place that got taken down. They can always make a buck with infomercials and canned Montel.

This is capitalism at its finest, and you cant blame a company for trying to make a buck!..
Its just that AAR was more than that...and its the government's failing that they are not providing equal time on our airwaves!...bring back the fairness doctrine!!
7/19/09, 9:40 PM
Post a Comment
<< Home
Contact
Home
Email:
brilliantatbreakfast at gmail dot com
RSS