Brilliant Recent Posts
Why is anyone having the vapors over this?
Why I miss Air America, and why this week just mak...
Is Condoleeza Rice to be John McCain's Dick Cheney?
CYAlis
Randi Rhodes Leaves Air America...Different Owners...
Air America hitting the Rhodes?
Around the blogroll and elsewhere
A nation of the corporations, by the corporations,...
It's official now: George W. Bush is today's Herb...
President Delusional: The Sequel


Can you imagine just how sick and twisted these conversations must have been?
Posted by Jill | 10:01 PM
Picture yourself in the same room as this:

As first reported by ABC News Wednesday, the most senior Bush administration officials repeatedly discussed and approved specific details of exactly how high-value al Qaeda suspects would be interrogated by the CIA.

The high-level discussions about these "enhanced interrogation techniques" were so detailed, these sources said, some of the interrogation sessions were almost choreographed -- down to the number of times CIA agents could use a specific tactic.

As the national security adviser, Rice chaired the meetings, which took place in the White House Situation Room and were typically attended by most of the principals or their deputies.

The so-called Principals who participated in the meetings also approved the use of "combined" interrogation techniques -- using different techniques during interrogations instead of using one method at a time -- on terrorist suspects who proved difficult to break, sources said.

In his interview with ABC News, Bush said the ABC report about the Principals' involvement was not so "startling." The president had earlier confirmed the existence of the interrogation program run by the CIA in a speech in 2006. But before Wednesday's report, the extraordinary level of involvement by the most senior advisers in repeatedly approving specific interrogation plans -- down to the number of times the CIA could use a certain tactic on a specific al Qaeda prisoner -- had never been disclosed.

Think about it -- a president who used to shove firecrackers up the asses of frogs and light them to watch the frogs explode. A vice-president who shot a friend in the face. A female Secretary of State in fuck-me boots who gets off on torture. An attorney general who's afraid of calico cats, offended by a statue's breasts, and anoints himself with vegetable oil. And he's the SANE one, the one who was troubled by the whole proceeding.

The picture of this bunch of perverts and psychopaths talking intricately about methods of torture sort of reminds you of the mactors and implantresses of Survivor Micronesia talking about pizza, doesn't it? Or of that scene from Fatso in which Dom DeLuise talks about sucking the jelly out of a jelly donut and filling it full of -- I forget what -- and baking it again. Or of these guys talking about sex: 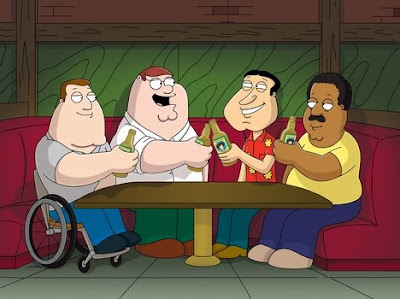 I don't know about you, just thinking about that conversation in the White House Situation Room gives me the willies. Whoever occupies the White House next had better fumigate it.

Anonymous said...
The more we find out specifics of this administration's sick machinations the more I feel like a fucking oracle.

Duh. All of this could be intuited from things we learned two years ago, even three. Icebergs, tips, etc. No one should be surprised when we hear much, much worse.
4/12/08, 12:23 PM
Post a Comment
<< Home
Contact
Home
Email:
brilliantatbreakfast at gmail dot com
RSS