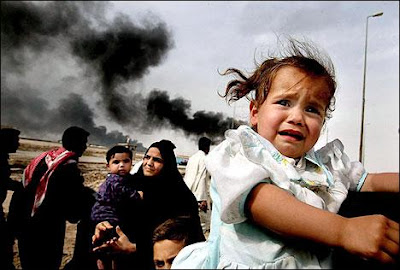 Five years ago, the President of the United States took this country to war based on lies:

"Simply stated, there is no doubt that Saddam Hussein now has weapons of mass destruction." -- Dick Cheney, speech to national VFW Convention, August 26, 2002

"Our intelligence officials estimate that Saddam Hussein had the materials to produce as much as 500 tons of sarin, mustard and VX nerve agent." -- George W. Bush, State of the Union Address, January 28, 2003

"We have sources that tell us that Saddam Hussein recently authorized Iraqi field commanders to use chemical weapons -- the very weapons the dictator tells us he does not have." -- George W. Bush, radio address, February 8, 2003

"Intelligence gathered by this and other governments leaves no doubt that the Iraq regime continues to possess and conceal some of the most lethal weapons ever devised." -- George W. Bush adddress to the nation, March 17, 2003

"There is no doubt that the regime of Saddam Hussein possesses weapons of mass destruction. And . . . as this operation continues, those weapons will be identified, found, along with the people who have produced them and who guard them." -- Gen. Tommy Franks, press conference, March 22, 2003

"We know where they are. They're in the area around Tikrit and Baghdad and east, west, south and north somewhat." Donald Rumsfeld, ABC interview, March 30, 2003

"I'm absolutely sure that there are weapons of mass destruction there and the evidence will be forthcoming. We're just getting it just now." -- Colin Powell, remarks to reporters, May 4, 2003

"I'm not surprised if we begin to uncover the weapons program of Saddam Hussein -- because he had a weapons program." -- George W. Bush, remarks to reporters, May 6, 2003

Many, many, many more here.

Five years later, 3990 American soldiers are dead. Tens of thousands more are wounded -- missing limbs, faces, parts of their brains. Countless Iraqi civilians are dead, maimed, missing family members, homes, and all that makes life normal. Women the Bush Administration claimed to have liberated from the spectre of Saddam Hussein's "rape rooms" are now resorting to prostitution to feed their children.

Today, Baghdad is as divided as ever. The death toll in Monday's bombing in Karbala is now 47, with 75 people wounded. Bombings occurred on Monday in Madaen, eastern Baghdad's Ghader, Shaab and Binoog districts, in Mosul, and near a checkpoint in Iskandariya.


All because of lies. All because of a bunch of lunatic chickenhawk men who see sovereign nations as just colored spots on a map, and the soldiers who fight their wars as just so many plastic chess pieces. All because of a president with serious father issues who wanted to show his daddy just who had the bigger penis, at the same time that he craved that very daddy's love.

It is five years into a war born of insanity, fought of insanity, continuing because of insanity. It is a war that has cost trillions of dollars, much of it missing into the black hole of sweetheart deals, cronyism, private military, and no-bid contracts -- trillions of dollars that could be spent here at home to rebuild our crumbling bridges and roads, educate our children, invest in alternative energy, provide health care for all Americans. Instead, it's being squandered in a war without end; an unnecessary war, a war based on lies told to a frightened American population by evil opportunistic men.

When we look at how the Iraq war came about and why it's being continued. When we look at the billions of dollars of missing money, and at Abu Ghraib, and at men like Sgt. Ty Ziegel and Bryan Anderson, the living faces of those who gave so much for so little reason, and the names and faces behind the numbers of the dead, and the many, many more who suffer in silence after a horror most of us can't even imagine, it seems ridiculous that as I write this, Joe Scarborough and Tucker Carlson are still having the vapors over inflammatory statements made by the pastor of a church in Chicago; remarks that taken in this context, seem to be perhaps a sane response to an insane situation.

But this is how they want it, isn't it? They, and their bosses in the executive suite WANT an election based not on hard looks at American policy, but based on the fears and knee-jerk responses of Americans who are seeing the life they've lived and the nation they thought they knew turn into some kind of perverse gargoyle nightmare. They WANT an election where they can pit the guy who spent five years in a a Hanoi prison against the uppity, haughty black man who didn't even have the DECENCY to do their bidding and throw his pastor under the bus in a vain attempt to placate the giant maw of the media. That the seemingly addled man who spent five years in a Hanoi prison doesn't seem to know -- much like his predecessor -- the difference between Sunni and Shia, and babbles about how Iran is arming al-Qaeda militants in Iraq until his handler, Joe Lieberman, gives him the correct information, doesn't seem to matter. If Chris Matthews says he's a maverick, we're supposed to forget that John McCain is talking about occupying Iraq for 100 years and that he's joked about bombing Iran. We're supposed to forget that while John McCain may not have George Bush's issues with his father, he has plenty of issues with his past and I have the sense that he wants the presidency so he can finally, once and for all, win the Vietnam war for which he gave five years of his life in that Hanoi prison. Do we really want another president who is willing to spill American blood rather than get some goddamn psychotherapy?

This country is bankrupt. Scarborough may be crowing that happy days are here again because the market surged yesterday after the Fed's rate cut, but the pain has just begun. Americans sense this, and that's why the reptilian brain that is so disturbed by the ravings of an embittered man in a pulpit of a Chicago church is so raw and sensitive right now. We are broke, we are no longer an economic superpower, and all we are now is a paper tiger that is on the way to becoming a wholly-owned subsidiary of China and the oil sheikhs of the Middle East -- only with nukes.

And it all began five years ago, when the perfect storm of a sociopathic president combined with a bloodthirsty, overly-powerful vice president, and the military-industrial complex decided to indulge their various lusts by invading a country that had done nothing to us.

Batocchio said...
Very nice recap. I've sometimes called it a perfect storm of idiocy, or the Peter Principle raised to the level of Biblical plague.
3/19/08, 2:24 PM

Mandy (ZenMonkeyMind) said...
that photo with the little girl is haunting.

Distributorcap said...
brilliant at dinner too!