Brilliant Recent Posts
Saturday Silly Blogging: A feminist icon that kno...
Now we really ARE a banana republic
It's Oscar® weekend. Does anyone care?
Around the Blogroll and Elsewhere
How secure is Barack Obama's Secret Service detail?
Why Are These People Smiling?
Meet the new boss, same as the old boss
When was the last time YOU saw a comprehensive hea...
What went wrong
So what Billo says, is that it's OK to lynch Miche...


This could almost turn me into a car person
Posted by Jill | 6:14 PM
I'm not a car nut. To me, a car is a way to get from point A to point B using as little gasoline as possible. I don't care about heated seats, remote keyless entry, power sun roofs, antilock brakes, GPS's, or any of that stuff. Our "newer" car is a 2003 Corolla CE with crank windows. It gets a sweet 42mpg on the highway, about 25 in local driving.

Every now and then, though, a car comes along that makes me look twice, The PT Cruiser was kind of like that, with its Edward G. Robinson gangster movie appeal. Except that the PT Cruiser is a clunky car with crappy mileage, whose reputation as cool disappeared as quickly as Hillary Clinton's inevitability.

Yesterday my next-door neighbor pulled his brandy-ass new Mini Clubman out of the driveway so that he could shovel, and it was love at first sight. For the car, not my neighbor. Now, these neighbors aren't car people either. They travel extensively, but they gave lie to the justifications people use today for McMansions by having raised two perfectly fine and well-adjusted children in a tiny ranch house, who now visit with their children. But I guess they decided to have some fun now that they are retired, and they bought this lovely beast: 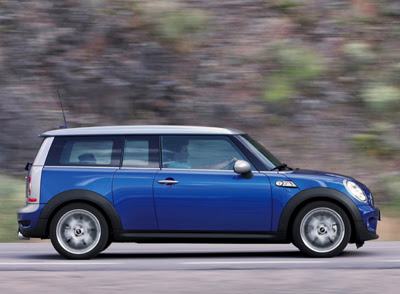 Their Clubman is a lovely chocolate brown, a color so delectable you want to break off a piece and eat it with a glass of milk. It looks simultenously elegant, funky, and retro, as if it just walked off the set of Miss Pettigrew Lives For a Day. But for all that I just wanted to give it a big hug, I didn't become completely, utterly, and irrevocably besotted until I saw the dashboard: 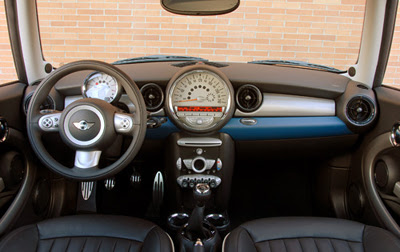 Now it seems that this is pretty much the same dashboard as the Mini Cooper, but again, that retro look just swept me away. It's rated at 34 highway/26 city, which isn't all that different from the current ratings for the Corolla under the new Federal guidelines...and it has TONS of cargo space. With an MSRP of $19950 - $23450 it's a lot pricier than the econoboxes that tend to be the vehicles of choice for the Brilliant household, and that's before you get to the kind of 1930's clothes one has to buy in order to look appropriately fabulous driving such a vehicle.

So for the time being, I'll just have to gaze next door every morning, imagine myself as Bonnie Parker as portrayed by Faye Dunaway, and say to myself, "Mmmmmmmmmm.......chocolate....."
2 comments

Unknown said...
I have a friend that had a mini for a while She liked but it advertised her where abouts. Because she worked for a school district, teacher would see her car in the lot and know she was there - a little paranoid.
2/23/08, 7:45 PM

Too bad even a basic Clubman is over 20 grand by the time you add a few essentials like the cold-weather package (essential around here, at least).
2/23/08, 10:14 PM
Post a Comment
<< Home
Contact
Home
Email:
brilliantatbreakfast at gmail dot com
RSS