Brilliant Recent Posts
Free Style Back Stroke...
Whatchoo Talkin’ About, Willis?
What to do about comments and other housekeeping s...
Things that make a progressive's head explode
Oh, good Lord....
A sure sign of the Apocalypse
Why do Republicans still have the edge on so-calle...
On the Iowa Trail.....Larry O'Donnell Tells it Lik...
That didn't take long
Generational warfare


The S-Chip Grinch: No Health Insurance For You!
Posted by jurassicpork | 11:35 PM 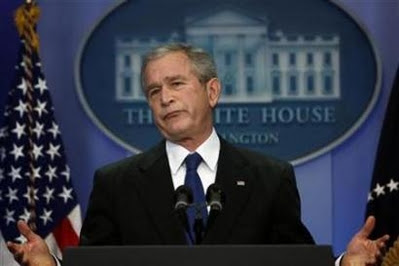 “Merry Christmas, you parasitic little fucks. We‘ll bill you for the coal in your stocking.”

He's a foul one, that Mr. Bush. I don’t know what’s more despicable: The fact that George W. Bush, aka the children’s health insurance Grinch, has vetoed a childrens’ health care bill for the second time this year or the fact that he did it behind closed doors.

If the evil twin of Diogenes scoured the world for another billion years holding aloft a lamp glaring the obnoxious kind of halogen headlamp that 17 year-old punks put on their Dodge Neons, he could not find a more loathsomely, thoroughly dishonest scumbag of a human being than George W. Bush. The tsunami of moral putrefaction and relativism vomited daily by this cuckolding of American democracy must, at some point, wash over the mainland and spill out into both the Pacific and Atlantic oceans, poisoning our international neighbors with its sheer virulence, with an irresistible force unseen since the levees were breached in New Orleans.

It wasn’t enough that Bush vetoed the bill in private before toddling off to beddie bye but that he even provided Congress with a statement that talked down to them as if they were the children and he the stern authoritarian Daddy:

Get that? The right direction is to get children into the warm, waiting embrace of privatized, nickel-and-diming HMO’s that makes its billions each year not by providing health care but in denying it in ever more novel ways.

Then again, there’s that stubborn insistence that children whose family’s incomes come above the median line already have private insurance. His other objection, if you can believe this, is that it would also provide state and federal government health coverage for adults.

So the kids already have private health coverage but their parents don’t?

Despite their single digit approval rating, I still trust in this instance the judgment of a bipartisan Congressional movement over that of a boob who once thought that he’d solved the health care crisis by telling us that all we have to do is walk into an emergency room.

Some have said that Bush’s main motivation for vetoing this bill again and again, to an increasingly jittery Republican minority that’s about to become an even smaller minority come November next year, is that he wants to continue moving all health care into the private sector. This isn’t true. Republicans couldn’t even dream of getting rid of federal entitlement programs such as Medicare, Medicaid and S-CHIP.

Others have opined that it’s because he’s opposed to a .61 cent increase on a pack of cigarettes. This also isn’t true, since a minor tax will not hurt tobacco giants who will merely find some way to pass it onto the consumer.

Some have even simplistically stated that it’s because George W. Bush is a cold-hearted prick who loves to deprive children.

No, no and no. I think the guy who said Bush’s opposition was predicated on a shivering loathing of any government program that would actually work hit the fucking nail on the head. This is at the bottom of every Republican’s shivering, shuddering, dry-heaving self-loathing of anything even remotely resembling competent government, except perhaps a government that acts like an ATM to every soulless, avaricious, self-dealing, GOP-friendly corporate entity looking for a stock-splitting, tax-free, cost-plus, no-bid handout at taxpayer expense.

Meanwhile, this is what Bush yesterday considered worthy of his attention and mercy: Pardoning 29 drug dealers, crooks and election fraudsters, some of whom with minor convictions going back to 1959, the year I was born.

Thank God some Republicans have their priorities straight.
2 comments

I have a secret fantasy whereby each and every member of the bush Family, all the way from the bones of their ancestors to the unborn children in their future, go straight to the darkest, hottest corner of hell where they spend all of eternity serving as fuel for the fire under Ronald Reagan's spit.

But that is unkind.

BTW, thanks for not changing your color scheme - it is something that makes your blog unique. I was dreading your remodel because most people screw up their blog when they do, but you didn't. Good job!
12/13/07, 3:42 AM

Anonymous said...
"a more loathsomely, thoroughly dishonest scumbag of a human being than George W. Bush"

You are too kind. That's the best you can come up for that POS? I'm aggravated everyday that he even breathes air.
12/13/07, 1:16 PM
Post a Comment
<< Home
Contact
Home
Email:
brilliantatbreakfast at gmail dot com
RSS