Brilliant Recent Posts
What did they THINK they were voting for?
Mrs. Arianna Huffington, YOU'VE SOLD OUT!!
It's the Testosterone Oscars®, or What Am I Going ...
100 Years of Folksy Fascism
Are these your photos, part deux
Ye Damned Whale
More misogyny from Republican males
Mike Stark has balls of steel
Happy Blogroll Amnesty Day 2011!
The misogyny of Republican men knows no bounds 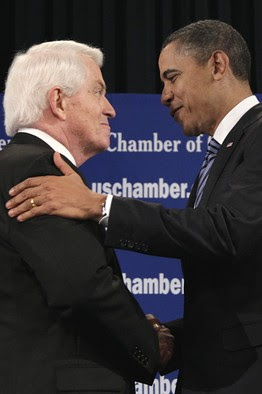 I'm still trying to decide if Barack Obama is stupid, naive, delusional, brain-damaged, bought-and-sold or a combination of all five. Otherwise, I cannot find a rational explanation for him addressing the US Star Chamber of Commerce today and thinking he can appeal to the patriotism of CEOs who are bound and determined to destroy America by hook and especially by crook.

Under a guise of strained civility, Obama said in part, "I understand that you’re under incredible pressure to cut costs and keep your margins up. I understand the significance of your obligations to your shareholders. I get it. But as we work with you to make America a better place to do business, ask yourselves what you can do for America. Ask yourselves what you can do to hire American workers, to support the American economy, and to invest in this nation."

Now, it's bad enough when Obama has to essentially steal from a dead Democrat, and one who stood up to Big Business, especially Big Steel during its 1962 strike. But he quoted the wrong speech by Kennedy.

When Big Steel pulled a bait and switch and got the workers to stop striking for better wages in exchange for a promise not to raise steel prices only to raise the price when a strike was avoided, Kennedy was hopping mad and delivered an address that should be dusted off and trotted out every time Big Business pulls something scummy like this. This is what Kennedy said in part on April 11, 1962 (slightly edited for historical relevance):

In this serious hour in our Nation's history when we are confronted with grave crises... when we are devoting our energies to economic recovery and stability, when we are asking reservists to leave their homes and their families for months on end and servicemen to risk their lives... and asking union members to hold down their wage requests at a time when restraint and sacrifice are being asked of every citizen, the American people will find it hard, as I do, to accept a situation in which a tiny handful of... executives whose pursuit of private power and profit exceeds their sense of public responsibility can show such utter contempt for the interests of... Americans.

The "tiny handful of executives" to which Kennedy was angrily referring was, of course, the steel executives who had betrayed the public trust as well as that of their steel workers. The workers, in a show of unity and shared sacrifice, did their part but the steel executives did not and asked for a $6 a ton increase once they'd gotten what they wanted.

Kennedy could've used this as a springboard for demanding government regulation of every business and every industry but he did not. This is the nature of business, this is the mindset of business executives who enjoy little to no regulation and privately laugh at the president and his initiatives the second his back is turned. The steel executives who'd pulled this bait and switch are of the same mindset as the psychopaths who belong to and run the US Chamber of Commerce led by Tom Donohue.

It's impossible for me, anyone fairly conversant in JFK's legacy, to imagine the 35th president making such a gutless speech riddled with delusion and naivete as the one delivered today by Obama before a sworn enemy in the US Chamber of Commerce, an entity that brazenly goes on national television to preach the dubious virtues of outsourcing of American jobs to their overseas plants.

Maybe Kennedy was a little naive in trusting the word of steel executives obsessed with their bottom lines but they never fooled him again. Obama is like Charlie Brown who never learns that the business community will always snatch that football from him at the last second, that they will smile and shake his hand and pat his back in public then go ahead and invest tens of millions more to defeat even his tepid domestic agendas.

Obama played to their patriotism, asking them to join the government in helping to build infrastructure, reminding them that they have a civic responsibility. One can only imagine how many CEO's were either privately or openly smirking when Obama asked them to invest in infrastructure. The closest that Big Business ever got to infrastructure renewal was when Merril Lynch CEO John Thain spent $1.2 million redecorating his office.

And yet, as you will see in the comment section of that WSJ blog post, there are those who still see this corporate kow-tower as a Marxist and wouldbe Socialist dictator. To them I say this:

It's people like them who should wear football helmets until the time to get tucked into bed at night. People like them who continually try to claim that Obama is some "Marxist/ socialist" (God, if ONLY) are simply racists who can't stand the idea of a black man being in the White House and have substituted "nigger" and "coon" with "Marxist" and "Socialist." This man is, if anything, even more pro-corporate than the fucking idiot who came before him, which is saying something. He bailed out Wall Street with virtually no conditions as Bush had, bailed out the automakers without setting any preconditions on them, he's used more war profiteers than Bush ever did and even just appointed that Wall Street scumbag Daley to be his new Chief of Staff just to show the business community that he loves them. The health care "reform" was essentially a massive giveaway, a third bailout, to the giant HMOs and Big Pharma (which contained the additional gift of a secretly-engineered $80,000,000,000 cap on reimbursements) that had no public option, a bill the Chamber spent over $100,000,000 lobbying against.

To call such a tool of the Bilderburg Group a "Marxist" and "wouldbe Socialist dictator" tells me that I just wasted about ten minutes of my life that I'll never get back to racist scumbags who would deny the sky was blue and the grass green if Obama said it was. And they can go fuck themselves and go back to Free Republic and Red State where they belong.

In return for Obama's pleas for more cooperation from a Chamber that is doing its level best to get him out of office (for the wrong reasons), Donohue choked back a laugh of his own and promised to not spend on any money on the next election.

Which is really funny considering the Citizen's United vs the FEC decision that allows the Chamber to spend laundered and fungible funds from multinational corporations in perfect anonymity on right wing candidates. The same right wing candidates on whom they'd lavished $32,000,000 during the 2010 midterms. 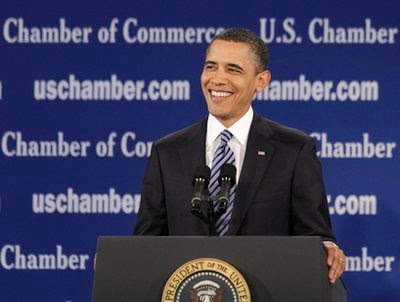 Yeah, if I had to deliver that speech, Barry, I'd be choking back a laugh, too.

Kennedy ended his address on the steel strike with these bitter words: "Some time ago I asked each American to consider what he would do for his country and I asked the steel companies. In the last 24 hours we had their answer."

And Mr. Obama should get his very soon and will no doubt be very surprised when he realizes that Tuesday brought Big Business as usual.
1 comments

Anonymous said...
Let's face it: it's all just politics. While Obama said he wouldn't mind being a one-term president, that's just earwash.

Just like EVERY politician, his first imperative is to remain in office, i.e., getting a second term, in his case. And how will he do that? Why, by "learning a lesson" from his "shellacking," and by moving to the "center" which is now really the right--and becoming a Republican (lite).

He's just another example of the New Politician--feed the people bullshit, but do what it takes to get ahead, including palling up to the RIGHT people($$$$).