Brilliant Recent Posts
What do you expect when one political party embrac...
It depends on what the meaning of "deadline" is
Happy Father's Day: Iraqi and Afghani Daily Grief ...
More like this, please
Saturday Big Blue Smurf Blogging: What They Said
I guess they'd rather we go naked
Here we go again...
Why I Love The Intart00bz
This is what a fighting Democrat looks like
"Natural Disaster"?


Politicians Are Dogs, Corporations Are Cats
Posted by jurassicpork | 10:11 AM 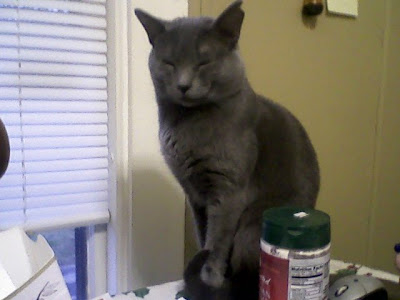 or, What BP Learned From my Cat Popeye.

We're kind to them, especially the loyal dogs on Capitol Hill. We take them in off the street, give them free run of the house, set few if any conditions. We let them get on the furniture, brush their dander and let them stick their asses and genitalia in our faces and we think it's charming. When they ignore the scratching posts we bought them and instead use the drapes and bed, we smile and shake our heads.

And despite there being no accountability and no oversight whatsoever, no matter how much we pamper them, these fat cat corporations like BP keep expecting more and are acting like, to quote Illinois Sen. Dick Durbin, they own the place. If their cat litter isn't perfectly fresh, they piss in your sink, in your tub and shit behind your couch then look at you as if you're one of the "small people."

And, contrary to the stereotype of the combative canine/feline dynamic, our doggie politicians and bureaucrats like Ken Salazar just keep opening and closing the door for these aloof little fucks. Please remind me again who the superior life form is?

Loyalty is why we prize the real thing. A dog will anxiously await your return from the store and howl over your grave no matter how you treated it. They're so loyal, they're even willing to accept conditional and sporadic love. They're the antithesis of the demanding yet emotionally-removed cat. 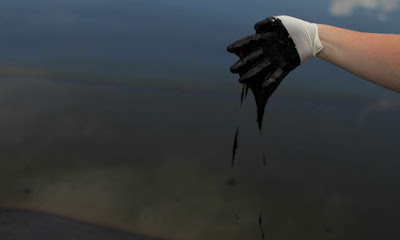 But too much unconditional loyalty isn't a good thing, especially when the environment and economy of the entire Gulf coast is in a shambles now because of BP's arrogant negligence and the enabling of the blind, unswerving loyalty of the Obama administration. This is the second consecutive administration that has catastrophically failed New Orleans and the Gulf. They waived environmental regulations by the hundreds and even helped BP lie about the true extent of the oil spill.

As with the junkyard dogs of the Bush administration, the lapdogs of the Obama administration solemnly swore just days before the Deepwater Horizon blew up and sank that opening up offshore drilling would involve only the very latest technology and advanced safety and backup features, with multiple levels of redundancy.

The only thing that's proven redundant is Congressman Joe Barton reminding us of Capitol Hill's real priorities when he publicly fellated BP's CEO Tony Hayward on the floor of the House mere days before Hayward tacked his way back to England to engage in a yacht race. Meanwhile, back at the doghouse, Louisiana and Gulf coast fishermen in their own boats were engaged in a race of their own, this one a losing one, as they suddenly had to learn how to be environmental workers if they wanted to make any money.

The Gulf oil spill, as massive, destructive and unprecedented as it is, serves as a mere synecdoche of where the actual loyalty and fealty of the highest levels of political power lie: With corporations that are built to kill the average man.

We got a taste of that with Phase One of the bailout under Bush in September 2008, then again with Phase Two under Obama last year. We got another taste of it when tens of billions of the TARP money was given to two of the biggest automakers with no strings attached (such as an insistence on retooling the factories to make greener cars with rock-bottom emissions, which would've put tens of thousands of auto workers back to work). We got yet another taste of the Obama administration's true allegiance when we saw Obama taking Bush's cue in widening offshore drilling in the Gulf as recklessly as he expanded Bush's war in Afghanistan. We got yet another taste of it when Obama showed up at the climate change conference in Copenhagen with lukewarm, corporate-friendly compromises and a silent refusal to sign on the Kyoto Protocol shown such disdain by the Bush junta. We got yet another taste of what contempt Obama and our Democratic "led" Congress feels for the people when illiterate, incoherently screaming, brick-throwing teabaggers and Facebook and Twitter dispatches by Sarah Palin actually prolonged the health care debate that turned out to be a huge bonanza for the HMOs and Big Pharma. And we got another taste of it when Congress, with much fanfare, produced another "reform" bill exercising little if any actual oversight and regulation of the banking institutions that have helped bankrupt America both financially and morally.

Ken Salazar also promised more stringent oversight of MMS, the same sex-obsessed Interior entity that continued (after the Deepwater Horizon exploded, caught fire and sank, killing 11 people while BP executives were high-fiving each other over their laughable safety record) giving over two dozen offshore drilling permits for oil cartels like BP, Royal Dutch Shell and others who couldn't be bothered to write environmental impact statements.

And, as with the Bush administration too many times to count, we saw more unswerving, canine loyalty to the worst people in the best jobs at the worst times and an insistence on keeping these wingtip-lickers in the center of policy-making. As with the Bush administration, the Obama administration is a glorified kakistacracy, or a government run by the very worst in the land. Bush's Interior Secretary was the oil cartel-loving Gail Norton; Obama's is the oil cartel-loving Ken Salazar. The telling difference is, Norton didn't ride into Colorado to pretend to be a sheriff who was going to clean up the Wild West of the Minerals Management Service and the Gulf coast.

And every once in a while, if you cock your ear like a half-asleep dog, you'll hear a little fart of truth like Joe Barton apologizing for the Obama administration uncharacteristically showing enough backbone to get BP to pony up $20 billion for an escrow account. The fact that the penny-wise, pound-foolish BP so immediately acquiesced to this is proof that they knew it was the best bargain in town when it comes to comeuppance.

Otherwise, our government and the corporations lie to us when they're not whining about wanting their lives back and condescendingly referring to us as "the small people." And there are three reasons why people lie to you:

Either they like you, they respect you and, what is the real reason here, they fear you.

I think we can rule out BP or any corporation showing any love, loyalty and respect for the "small people" who keep them in yacht races on the Isle of Wight so the reason they lie to us is because they fear us. You'd think the British would be extra ingratiating to we the people considering what they've done to this part of their old empire.

The only respect they're showing to us is not individually but collectively. They respect our strength in numbers. This is what we keep forgetting.

Imagine what this country would be like if we all just stopped paying our bills and put the skids to this entire economy. Oh, sure, some would suffer in the beginning. We'd get our gas, water, phones and everything shut off. Then the infrastructure would start to collapse because even the biggest credit card, lenders and utility companies wouldn't have the time or resources to process over 200,000,000 outstanding debts.

Then we could make our demands known, Democrats and Republicans, liberals and conservatives, progressives and teabaggers alike and everyone in between. And things would have to change. But that won't happen because you want your cable to stay on, because you've forgotten how to live without electricity for even five minutes, because things would literally come to a halt if you went one week without filling up at a BP or Exxon Mobil gas station. We've forgotten what it's like to truly suffer and that's the most intolerable thing in the world to a people that casually visits suffering-by-proxy on our fellow humans in central Asia and the Middle East on a massive scale.

These fat cats have no loyalty to anything but the Holy Dollar. That is the only God that matters to them, that is what inspires their reverence and unswerving loyalty. And we could continue getting kicked like the disgustingly loyal curs we've been for over a century or we could growl back and remind those in power who's really the alpha dog.
0 comments