Brilliant Recent Posts
More like this, please
Saturday Big Blue Smurf Blogging: What They Said
I guess they'd rather we go naked
Here we go again...
Why I Love The Intart00bz
This is what a fighting Democrat looks like
"Natural Disaster"?
Job-Swapping and Populism: perhaps the wrong guy ...
Keith Olbermann, the Kossack Cheerleaders, and Fak...
Senate Democrats to the unemployed: Drop Dead 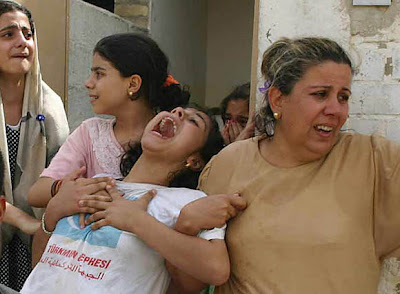 Who knows how the President will celebrate Father's Day and, frankly, who gives a shit? Considering that this is a guy who has ordered extra-judicial assassinations on American citizens and has ramped up an incredibly unwinnable, incredibly corrupt, incredibly bloody and incredibly cruel war in Afghanistan, I think it's pretty safe to say that Barack Obama won't give any more thought than did Bush to the fathers who can't be with their families today and those who never again will be with their families.

So let's take stock as to what's happening just this weekend, starting with Iraq:

27 Iraqis were killed and at least 42 were wounded in twin car bomb attacks in Iraq's capital of Baghdad.

In the energy-rich southern city of Basra, at least one Iraqi was killed by police yesterday when the citizenry protested lack of electricity after a US occupation that's in its eighth year (Personal note: What they used to say about Hitler keeping the buses running on time also applies to Saddam Hussein: At least Iraqis had regular electricity and basic necessities to sustain human life under their dictator.).

That was just what was reported in Iraq in the last day and a half. Meanwhile, in the Other Wild West Show in central Asia...

Despite assurances from coalition flaks about us killing fewer Afghani civilians during the surge, "precision" missile strikes against the terrorist Haqqani network, reports NATO, resulted in the deaths of six civilians consisting of a woman and five children. 13 other civilians, claim Afghani authorities, were wounded.

Two push cart bombs killed another woman and child and an unidentified third person at a bank in southern Afghanistan.

A roadside bomb killed two policemen and three civilians in the nation's capital of Kabul yesterday.

Despite unprecedented corruption on the part of the US military and US contractors, Blackwater just received another $120,000,000 contract in Afghanistan courtesy of the US State Dept.

UN General Secretary Ban Ki-Moon says a UN report has discovered that in the first four months of 2010, IED use is up 94% in Afghanistan from that same time last year. In Iraq, IEDs have been the number one cause of death among US troops.

Meanwhile back at the ranch, two days ago we lost track of 17 Afghani troops who were studying English at Lackland Air Force Base in San Antonio. They decided to go AWOL and haven't been seen or heard from since despite an APB throughout local law enforcement.

1124 US troops have so far died in Afghanistan, almost 500 of them in the deadly Helmand Province alone. Obama's 2009 surge in Afghanistan has had the opposite effect of Bush's 2007 surge in Iraq: Over twice as many troops died in Afghanistan in 2009 than in 2008 (and, at 177 official deaths, we stand to easily exceed 2009's figures this year) while Bush's surge resulted in US troop deaths being cut by almost two thirds by 2008.

That's a lot of fathers who won't be served breakfast in bed and get homemade cards and presents from their wives and kids. That's a lot of Father's Days that will be forever suffused with sadness from wives and children who'd love to be able to make a card and buy a present for their husband or father but can't.

And while Iraq and Afghanistan don't buy into the artificial card company-generated Father's Day, many more children will no longer be picked up and dandled by their fathers. Many more innocent fathers than US troops have been killed in Iraq and Afghanistan, nations with, respectively, populations 1/15th and 1/10th our own.
0 comments