Brilliant Recent Posts
The Democrats don't care about the Constitution ei...
What to do with your old diaphragm
The most loathsome administration in history
Update to Lyre, Lyre, Pantz & Fier
But don't even look at this stuff, let's focus on ...
Olbermann/Driftglass '08 or the Terrorists win
When giving away the printed word is a subversive ...
Joe Biden looks like a genius today
John Edwards Slaps Tim Russert Silly
Whats Up? Whats New? Whats Happening? Maron and Se... 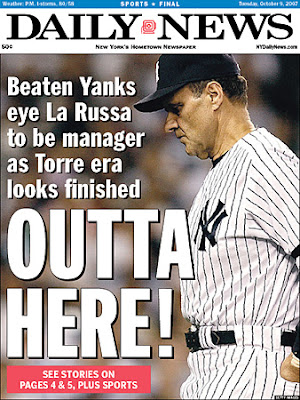 I know how you feel today. I really do. The difference is that those of us who follow the team that plays out in Queens are more used to it then you are.

Sometimes I wonder how you folks even enjoy the season, if the only thing that matters is those few games in October. You guys are so used to running away with the division every year that you start screaming bloody murder every time your team loses a game. How can you get any pleasure out of winning when losing destroys you every time?

Before you start calling Mike and the Mad Dog today screaming as if someone were eviscerating you with a blunt knife, consider this: Your team came back from being 14-1/2 games back at one point and made it to the postseason. This is almost unheard of. And do you want to know one of the reasons this happened? One Alex Rodriguez. Already you've forgotten that this guy hit .314 this year, with 54 (presumably) steroid-free home runs, with a .422 on-base percentage and a .645 slugging percentage. That's eight full points above his career batting average. Yes, A-Rod seems to have a problem producing in the postseason -- but only in New York. Ask yourself today if your "Hit a Home Run Every Time" mentality, and the pressure that puts on a star ballplayer, has something to do with that.

I'm no star ballplayer, but I can tell you from experience -- feeling you have to be perfect every time on your job, that the consequences will be dire every time you make a mistake, is not just a terrible way to live but a guarantee that you will fuck up -- just from the pressure. So before you run a player like A-Rod out of town, give it a few days and make sure it's what you want.

Another thing to consider: Your team has had as its manager for twelve years one of the classiest guys ever to be part of this game. Yes, it's been a long time since you won a championship, but getting to the postseason is hardly chopped liver. Think of all the fans for whom the season ended two weeks ago. Good ballclubs go to the postseason, but in a short series, anything can happen. Do you honestly believe that the St. Louis Cardinals were the best team in the majors last year? Hardly. They got hot when it counted, and this year it was Cleveland's turn to get hot. Just like it's been the Rockies' turn to get hot at just the right time.

One thing that helps me is finding a reason to support another team just for the postseason. I know you're not about to root for Cleveland, and you're sure as hell not going to root for the Red Sox. But you might consider doing what I'm doing, and hoping that the trophy goes this year to the aforementioned Colorado Rockies. The Rockies are also managed by a very classy guy in Clint Hurdle. Hurdle was not only a decent utility guy for the Mets in three seasons, but also is an active advocate for research into Prader-Willi syndrome, which afflicts his daughter. But he's just the manager. The team is another story. The team has voted a full postseason share to the widow of their minor league first base coach Mike Coolbaugh, who was died after a line drive hit him in the neck this past season. Coolbaugh's widow is 32 and pregnant, with two other small children. The share was the players' idea.

The first day is always the hardest, I know. It's hard because you know the opposing team's fans are gloating. It's hard because everything was SUPPOSED to point to winning it all. It's hard because once your team is out of it, it's really and truly autumn (despite the 90-degree temperatures yesterday) and nothing's coming but a lot of leaf-raking, followed by the entire world turning grey for about four months. But you will get through this. And in a week you'll feel better.