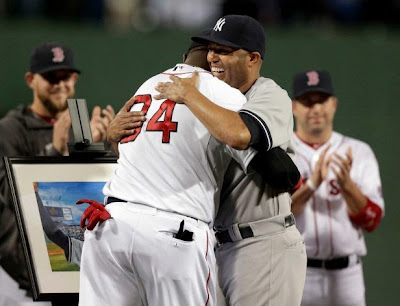 Last evening at Fenway Park, history wasn't made as much as commemorated when the Boston Red Sox honored Mariano Rivera, indisputably the greatest closer of all time. This being Number 42's final season and last night capping the last series between the two teams, Rivera was feted with a short roast by Kevin Millar, Bill Mueller and Dave Roberts, the three men who'd victimized the usually reliable closer in Game 4 of the 2004 ALCS. The Red Sox weren't just close to extinction, they were thisclose to getting swept in what had been a storybook season. And Millar, Mueller and Roberts were gleefully rubbing the Sox's comeback in Rivera's face, a comeback that presaged perhaps the most catastrophic collapse in the history of professional sports. But after all the jokes were made, the Red Sox organization presented Rivera with a painting of his wide grin on Opening Day 2005 when the hometown team got their World Series rings in front of the Yankees. They also gave him the pitching rubber with a plaque from the visitor's bullpen, an original 1934 seat with his number on it, his number from the Green Monster signed by all the Red Sox players and a check from the John Henry group to aid his favorite charities in Panama.
In the midst of the ongoing steroid scandals swirling throughout MLB, including the suspension of Alex Rodriquez (a man who will never be known as a team player), it's nice to see that, once again, baseball has a hero to wipe off some of that tarnish. Rivera was always a class act back when he was a setup man for John Wetteland in the mid-late 90's and caused spines all over New England to turn icy cold when he was put into a game against the Red Sox. Historically, the game's greatest closers have been lifelong National Leaguers (Lee Smith, Billy Wagner, Rob Nenn, Trevor Hoffman, John Franco, etc). But the American League's Mo Rivera was greater than any of them.
Mariano Rivera gave Red Sox Nation more fits than reasons to celebrate. But it could be said that, despite the ongoing fierce rivalry between the two AL East powerhouses, Boston fans love baseball excellence a little more than their hometown team. So, in my own small way, I wish to honor Mariano Rivera by presenting ten of the most amazing facts about his career, culled from his official stats page on baseball-reference.com.