Brilliant Recent Posts
But hey, it made Michael Chertoff rich
Speed Dating With Willard
The Republican answer to everything: Cut Taxes an...
"I Don’t Even Consider Myself Wealthy."
OK, enough with the gravitas, class and decency
I wonder if people in towns hit by tornadoes still...
Blogrolling In Our Time
Breitbart's Empty Box
A journey through the fetid swamp of women-hatred
You Haven't Come as Far as You Think 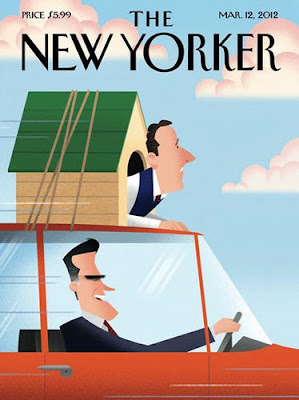 One of the pleasures of reading Gail Collins in the New York Times lately has been seeing just how she's going to work the story of Seamus, the Romney family dog who was once strapped to the roof of the Romney car on a trip to Canada, into her column. Today, as columnists take a breather from trying to insist that no matter how awful the Republicans are, Barack Obama is still going to have a difficult time being re-elected. Collins goes full-on Seamus:

The story took place in 1983, when the Romney family made a 12-hour pilgrimage from Boston to a vacation home in Canada. Romney, his wife, Ann, and five sons were in the station wagon. Seamus was in a crate, or kennel, on the roof.

At some point — possibly in response to the excitement about being passed by tractor-trailers while floating like a furry maraschino cherry on top of the car, Seamus developed diarrhea. And Romney, who had designated all the acceptable rest stops before beginning the trip, was forced to make an unscheduled trip to a gas station. Where he kept the family in the car while he hosed down the station wagon and the dog, then returned to the highway.

“It was a tiny preview of a trait he would grow famous for in business: emotion-free crisis management,” Swidey wrote.

People, does any of this sound appealing? Elect Mitt Romney and he will take the nation on the road to the future. Some of us will be stuck on the roof. The rest of us will be inside singing camp songs and waiting for the day when the master plan lets us stop to visit the bathroom. Plus, anybody who screws up on the way to the future gets the hose.

The comments are just as worthwhile. Our blogrollee, Karen Garcia .notes an astonishing parallel between the Romneys on that Canada trip, and the film National Lampoon's Vacation, which makes me wonder just whom in the Romney version plays the Christie Brinkley role. But other comments note the larger undercurrent that gets lost in all the fun of harping on this incident, and what it says about Mitt Romney. It shows a man who draws clear boundaries between his inner circle and everyone else "out there" (which presumably includes the unemployed, the underwater homeowners, and everyone else who isn't worth a quarter of a billion dollars). It isn't that one can't identify with the poor when one is rich, but the Romneys exhibit at best a cluelessness about how the other half lives, and at worst a callousness.

Ann Romney exhibited the former last week when she attempted to create an answer to a question about her family's wealth by trying to deflect the definition of wealth over to the love of friends and family. It was a well-meaning attempt, but when the wife of a quarter-billionaire starts out by saying she doesn't see herself aa wealthy, there's a certain Marie Antoinettishness about the whole thing, even if you adhere to the Marie-as-clueless theory rather than the Marie-as-heartless-bitch theory. But Mitt Romney's hamfistedness in dealing with questions about the latter is the cause for concern. His offhanded references to "There's a social safety net; if it needs repair I'll fix it" show the kind of callousness that one would have if one regarded the fact that one's dog had literally shit himself in terror while riding on highways on the roof of a car as a minor inconvenience to be dealt with by hosing off the dog and putting him right back into the situation that caused the distress.

Gail Collins' schtick about including a reference to Seamus in every column is entertaining, but while it may seem trivial, it does warrant examination as to what it says about the man behind it. And Romney should take the story of Seamus as a cautionary tale, especially the part about Seamus running off to find a new home. Because even a dog knows when to abandon Mitt Romney.

The Wifely Person said...
I, too, had a comment on Collin's column this morning, albeit much farther down than Karen's. In part, it read:
"Where as the president is No Drama Obama, Romney comes across as Cold As Ice Mittens. A guy with refrigerant in his veins does not inspire confidence that he will be a good steward of the large, diverse, rambunctious nation of ours. A man who could show no compassion toward a sick animal that was a member of his family is not the guy I want making decisions about the welfare of this nation's people."