Brilliant Recent Posts
This is all kinds of win
Isn't it funny how the GOP candidates who have "ru...
I want to see Megyn Kelly pepper-sprayed on live t...
Brothers of Different Mothers
So what on earth makes anyone think that more tax ...
And yet they have time for this
Did anyone actually think this would turn out any ...
Think it's any coincidence...
Republican Spider Man Sez:
Sick sick sick sick sick.


Only America would have a holiday the point of which is gluttony...
Posted by Jill | 8:56 AM 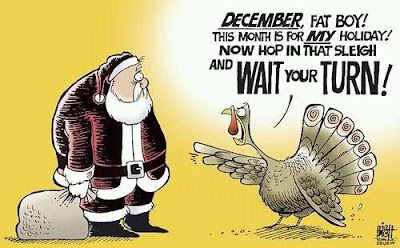 Because Mr. Brilliant has no family and I have none living close by, Thanksgiving is a quiet affair here at Casa la Brilliant. When Mr. B's father was alive, I once did a big Thanksgiving dinner for the three of us, with fresh fruit, handmade ravioli with vodka sauce (neither of them handmade by me), turkey, stuffing, mashed potatoes, green beans, and something for dessert that I don't remember. Then we started just going out to eat on Thanksgiving.

I grew up with the doctrine that eating out on Thanksgiving is depressing, so my mother made a turkey every year, or else we went to the home of one of her friends. But in recent years, I've discovered the pleasure of letting someone you don't know do the cooking. The last few years we've gone to the Thanksgiving Brunch at the Short Hills Hilton. This is pricey, but they do a lovely buffet spread (which Mr. B. likes for its variety) with unlimited champagne or mimosas. If you're a big eater, you can start at the omelet station for eggs, bacon, and sausage and then move on to trips for appetizers and hot food. If you're more like me and always find today to be a minefield, you case the joint first looking for what's OK to eat and then take a little of the things that looks good and also look like they won't have you in the cardiac ward of St. Barnabas on the way home. They do some lovely salads, and have great smoked whitefish, and then I tend to lean towards things like ale-braised shortribs and orichiette with broccoli rabe and sausage and maple-glazed carrots. After 56 Thanksgivings and the advent of Trader Joe's sliced turkey and frozen mashed potato discs making it possible for even non-cooks like Mr. B. to prepare a turkey dinner any night of the week, the whole "traditional" Thanksgiving dinner seems kind of ho-hum.

For me, the worst part of Thanksgiving is the pitying looks that colleagues give you when you say that it's just going to be dinner for two on Thanksgiving. It makes me understand in a far lesser degree what my colleague who recently underwent treatmet for breast cancer described as "That Look". If I had family close by, I'd be there for Thanksgiving. But I don't, and Mr. B. doesn't, and sucking down unlimited champagne and eating pears poached in port wine with goat cheese is a pretty damn pleasant alternative. It's my one concession to consumerism over the Thanksgiving weekend, since I have zero intention of going anywhere near a store this weekend, unless it's to Trader Joe's to buy that big tray of sliced turkey breast and stuffing just so we can say we have turkey leftovers to eat while we watch the increasingly bad New York football teams play.

This year in Blogtopia (™ Skippy), we are highly amused at Pat Robertson's bafflement about whether mac and cheese is "a black thing":

I realize that Thanksgiving is supposed to be about the Potatoes Mashed and Sweet, but for my money, if you're going to eat a high-fat, high-glycemic index food on Thanksgiving, which is all about comfort food, why NOT macaroni and cheese?

I realize that to admit a fondness for macaroni and cheese at my advanced age is akin to confessing to still liking Smarties (which I do) when you are above the age of ten, but we all have guilty pleasures, and that one is mine. And I'm not alone.

You can pretend you aren't making comfort food by coming up with recipes like Rustic Fried Sage and Chicken Apple Sausage Mac n Cheese with Autumn Chutney, and Wild Mushroom and Grana Padano Macaroni and Cheese, but we know the truth.

I've made passable mac 'n' cheese using cheddar, but it can be difficult to get the sauce consistency just right. Cheddar mac can be a bit grainy. Ken Johnson of Amarillo Grilling says his secret is French butter, though I suspect that the four kinds of cheese he uses for his amazing rendition of this dish has something to do with it, because his macaroni and cheese leaves no pools of separated grease on your plate, but is just forkfuls of rich, creamy, cheesy, crunchy heaven.

Here are some other recipes that look worth trying if you're inclined towards an early death because there won't be any Social Security by the time you hit age 66:

Are you going to argue with Paula Deen's Creamy Macaroni and Cheese? I'm not.

Likewise for Smack Yo' Mama Macaroni and Cheese.

Admit it. You now want macaroni and cheese today.

Have a great day, everyone. And go the fuck to sleep tonight. The tchotchkes will still be in the stores tomorrow.

PurpleGirl said...
Hope you and Mr. B have a good day.

I've had Thanksgiving with friends, by myself at a local Irish Pub, with a friend and her extended family (which is what I'm doing today). I've learned that you make your own happiness or unhappiness. Dinner with my family was often a problem because I'm the bleeding heart, liberal, pinko, commie and not religious any more. Easier and better to make my own day. No guilt for me about not being with my family.
11/24/11, 12:26 PM

Glad to see I'm not the only one that's making nothing more complicated than reservations!

Phil said...
It doesn't make a damn bit of difference where you go to eat, it's the thoughts that count.
Happy Thanksgiving to you and Mr. B my dear lady.
And thank you much for your support this past year.