Brilliant Recent Posts
Ohio isn't leaving anything to chance in 2012
Effin' Hippies.
Blogrolling In Our Time
So much for Mitt Romney being the sane Republican
Happy "Independence" Day
It's a hack. It's not funny. And why is it still...
Around the Blogroll and Elsewhere: Is This What I...
In case you thought the expression "Republican war...
Their tentacles are everywhere
...And Justice For Gaul 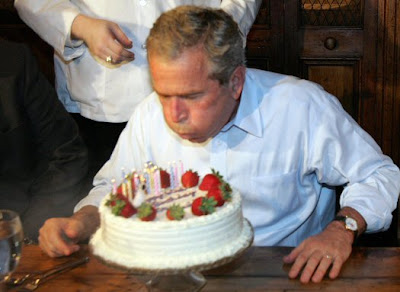 For those of us who pay attention to dates, today happens to be the 65th birthday of not only Sylvester Stallone but also that of another mush-mouthed right wing idiot: "Former President" George W. Bush. Just two days ago, we'd celebrated as a nation our collective 235th birthday. Believe it or not, the jury's still officially out on Bush's place in presidential history. For those of us in the reality-based community, the conclusion was foregone even before Bush got inaugurated in the presence of the guy who'd actually won, a guy who had to depart from presidential tradition and ride in an armored limousine down Pennsylvania Avenue on account of all the eggs that were thrown at him by enraged voters who knew he'd stolen the presidency.

And that was but the first of all the traditions and "innovations" launched by Bush, a man whose illegitimate presidency was somehow, by some inexplicable political alchemy that turns rotten eggs into golden ones, turned around and literally and figuratively given one blank check after another after the most catastrophic failure in American history since the bombing of Pearl Harbor.

Under Bush, we saw the creation of the Department of Homeland Security, by now a $100 billion a year, 21-headed clusterfuck that has hardly resulted in the arrest or conviction of a single terrorist. Instead, riders attached to a Homeland Security funding bill stripped 180,000 federal workers of their union rights. Homeland Security, which never included the two agencies best equipped with dealing with terrorist threats (CIA and FBI), instead boasts Animal and Plant Health Inspection Service (which checks for mold and boll weevils), the recently demoted FEMA (incapable, as Keith Olbermann famously said, of responding to a terrorist called standing water), the Plum Island Animal Disease Center and Federal Law Enforcement Training Center (trainees against seasoned al Qaeda terrorists?).

2002 also saw Bush sign into law the USA Patriot Act, the most fascist bit of legislation to come down the pike since Hitler's Enabling Act. It essentially designated all Americans as potential terrorists, especially in the Draconian Section 215 that gives the FBI the power to seize or otherwise subpoena library records or book store receipts if our choice of reading falls within the parameters of some secret list of objectionable titles.

Back in 2001, Bush also authorized the NSA, our nation's largest spy agency, to spy on not just foreign nationals but every American while using the telecommunications giants to that end. Those that complied were rewarded with big government contracts. Those that didn't, such as Qwest, were frozen out. It made a mockery of the Carter-era FISA courts that had granted 9000 out of 9005 requests for warrantless wiretaps on foreign nationals.

The USA PATRIOT Act, as with the bloated Dept. of Homeland Security, has not captured, brought to trial or convicted one person of terrorist activity, unless you count wouldbe gang-banger Jose Padilla, British moron Richard Reid and another Woody Allen-type of plane bomber from Nigeria.

Yet the very suggestion that we let expire even some provisions of Bush's USA PATRIOT Act is enough to send bad-ass, trash-talking Republicans into (manufactured, to be sure) sweaty hysterics, proof right there that Bush's culture of fear is still very much alive and well.

Things have hardly gotten better under Obama, who seems to have gratefully accepted the massive national security apparatus and quasi-fascist infrastructure handed to him by Bush. I'd predicted years ago that there was no way Obama would phase out the USA PATRIOT Act, dismantle Homeland Security or relax cumbersome, humiliating and quite possible illegal restrictions and invasions of our privacy by another bloated, corporately-co-opted bureaucracy now called the Transportation Security Administration.

While still running for President, Barack Obama voted to give the TelCom giants immunity from prosecution for violating our 4th Amendment rights. It was the vote that told me and many of us that this man would not effect any change whatsoever. Just as several Watergate-era criminals came back into the fold during Bush's residency, many unconvicted Wall Street criminals were soon infesting the Obama administration, starting with the Treasury Department.

Under Obama, we've seen no erosion of the power of the USA PATRIOT Act, no decrease of the size and scope of Homeland Security, no corporate accountability whatsoever, tepid at best oversight and, if anything, a tighter collar and shorter leash attached to every American. Soon, we may not be immune to humiliating and invasive patdowns while driving in our own cars.

We may like to fool ourselves into thinking we remain the Land of the Free and Home of the Brave but remember the true rationale that went behind the formation of Homeland Security and the PATRIOT Act. Until Bush's first 8 months in office, American soil had not been seriously attacked by foreign terrorism. We did perfectly fine before Homeland Security and the USA PATRIOT Act were formed. Homeland Security's greatest efficacy, it could be argued, was in jacking up the terror threat level when Bush's ratings began to slip during the 2004 election year.

We still live in a culture of fear. It's greatly subdued now but we still live in one, nonetheless. And until we dissolve Homeland Security and the PATRIOT Act, we will continue to live under Bush's baleful shadow. Our collective fear and willingness to have our rights stripped from us is Bush's real coveted legacy. And if that’s what Bush secretly wished for when he blew out a birthday cake way back when, he certainly got it.
1 comments