Brilliant Recent Posts
Ross Douthat wants a "Handmaid's Tale" world
Nothing is the new something.
Well, he should just lose height then
I feel better now. A bit. Maybe.
Lest we forget.
Good Riddance.
Our Dick Cheney
You want small government? New York City this wee...
The Jon Swift Memorial Roundup 2010
What Sarah Palin fans eat


Two Hundred and Forty One Flew Over the Cuckoo's Nest
Posted by jurassicpork | 12:19 PM 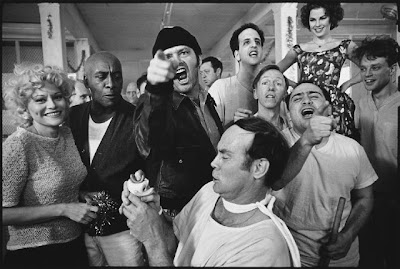 I miss Hunter S. Thompson. Probably more than most of you.

I wish the American mainstream media had taken his cue and had all become gonzo journalists, unafraid to take sides and to deliver the news that mattered instead of dutifully bleaching out any editorializing and jealously coveting access at the very expense of the news.

Because if we had, we wouldn't be seeing pap like the kind posted under the AP's Larry Margasak's byline. The title of the piece, currently the lead story on Yahoo's index page, is "GOP Agenda May Mean More In 2012 Than Now." As it's supposed to according to the rules of journalism, the opening paragraph tells you exactly where the author is headed, although it doesn't promise to be anywhere nearly as good as The Promised Land:

WASHINGTON -- Even if the next two years end in congressional gridlock, Republicans hope to build a record that demonstrates to voters in 2012 that they can get it right.

Yeah, you read that right. Republicans #1 actually care what their voters think, #2 they actually have a vested interest in "getting it right" (or, in the first language of the Republicans, "mach es tuchtig.") and, most risibly, #3, the obstructionist GOP is our best hope of ending Congressional gridlock.

Say what you want about the bland mainstream media but every once in a while, they do get off a good one.

The New York Times hardly gets it much more right in their lead story of what will happen in the next two days when the inmates will finally get to throttle House Speaker Mildred Ratched as they take over the beautiful, marble asylum known as the House of Representatives.

Barack Obama is Turkel, naturally, the kindly, befuddled orderly who just can't seem to keep those damned lunatics in line and got drunk on the Koolaid of bipartisanship and surely got his poor, old black ass fired because of their shenanigans.

This is basically Margasak's view of the GOP, courtesy of Red State, mealy-mouthed Republican Congressmen and women like Eric Cantor and Michele Bachmann reciting the long-irrelevant Declaration of Independence that they seem to revere more than the Constitution.

Not a word from Margasak, or the NY Times, about how the GOP had already put the kibosh on a climate change committee and actually intend to investigate the President's very legitimacy and eligibility to hold office.

They also promise to hold hearings into the now-defunct ACORN that was slain by a Republican jailbird and stooge named James O'Keefe and into the so-called New Black Panther Party because proper-thinking Caucasian-Americans shouldn't be expected to tolerate the threat of an empowered African American electorate. And one supposedly intimidated white voter in Philadelphia, in the Republican mind, far outweighs actual voter intimidation and disenfranchisement of countless tens of thousands of black people in different states and in successive elections.

Yes, the Republicans will show us the way, just as they did during the four years they had complete power over all three branches of government. That was 2003-2007, the years we saw the invasion of Iraq, the implosion of the housing market and the US economy in general, revelations of Olympic-class Republican corruption and sexual perversion, the death-by-negligence of New Orleans, foot dragging in Afghanistan, the outing of Valerie Plame... The whole rotten list of indictments goes on and on.

And the party that thinks corporate and personal tax cuts and saying no to whatever the Democrats want are the solutions to all of life's problems are going to somehow lead us from a brutal African oppressor and into the Promised Land? (A note to non-Biblical scholars: The Israelites stumbled in the desert for 40 years and their descendants had to wait another couple of thousand years before their Promised Land was finally founded.)

Until the MSM get it right and start holding these lying, thieving, racist psychopaths to the same scrutiny and standards to which they hold the Obama (and any Democratic) administration, then they're in no position to be taking sides and naively hoping, and fooling the American people into thinking, that the world-eating Republican Party is the magic elixir to all of our problems.

They're the ones who pushed us over the cliff. Don't go looking for a rope anytime soon.
2 comments

Nameless Cynic said...
I just want you to know that you're my hero.