Brilliant Recent Posts
That was a lot of trouble to go to just to leave a...
Blogrolling in our time
Saturday Linkasaurus
Around the Blogroll and Elsewhere
Unreality TV: The Redemption of Boston Rob
Quick Dispatch from the Department of Great Ideas
Blogrolling In Our Time
A terrible loss to the blogosphere
Top 10 Items Left Behind in Rush Limbaugh's Apartment
New Jersey Nets Offer Bizarre Promos


Enormous Progress
Posted by jurassicpork | 10:15 AM 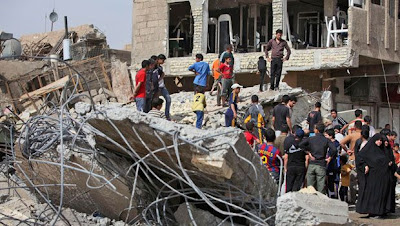 In terms of brainless, election day optimism, only one nation stands head and shoulders above the American people and that's the Iraqi people. After ridiculing the posturing by their own candidates, Shiite, Sunni and Kurdish Iraqis have nonetheless poured out of their houses to vote for 6200 candidates to fill 325 positions in the new Iraqi parliament. Hope and purple fingers are, once again, in the air. "Surely this election will be the one in which we get it right," they convince themselves.

But as a certain blogger once said after the 2005 Iraqi elections in one of his first blog posts, "An election is not a democracy any more than the wedding is the marriage."

After a war and brutal occupation that is now almost exactly seven years-old, when the average Baghdad resident still gets, on average, only 12 hours a day of electricity (as compared to the 16-24 a day they got under Saddam, in direct contradiction to a blatantly propagandistic Army.mil article last month that claimed they had only 2-4 under Saddam), workable sewers are little more than, no pun intended, pipe dreams, families are cramped together because of a chronic housing shortage and even a basic biological necessity such as safe, potable drinking water is in short supply, Iraqis still think they will elect that Magnificent 325 that will set the country back on its right course.

Yet when one looks at the death toll during this election one sees eerie similarities to 2005's elections. In fact, if you compare today's AP article to the CNN article written in late January 2005, you'll note that even the body count is virtually identical.

26 voters, defying intimidation, were killed during yesterday's voting. At least 23 were killed in 2005's election if one adds up the isolated incidents involving fatalities. (An interesting sidebar, literally and figuratively, asked CNN readers in a poll if they "expect[ed] violence in Iraq to decline following the elections" and a resounding 68% said no.)

Close to a million Iraqis, according to the figures of some humanitarian organizations, have been killed with countless hundreds of thousands more injured and millions displaced, including a particularly bloody ethnic cleansing that necessitated Bush's surge in early 2007.

With a Republican-dominated Congress and freshly re-inaugurated to his second and final term, Bush had nothing to lose and everything to gain from a successful Iraqi election in 2005 but the same cannot be said for President Barack Obama. Of course, Bush tried to sell 2005's "successful" election that resulted in his buddy Chalabi getting a thumpin' (in the Dec. 2005 election, Chalabi got a whopping one half of 1% of the vote from a corruption-weary electorate), dozens of Iraqis killed and hundreds more maimed from grenades, mortars and bullets and people denied their food ration coupons unless they voted, not knowing who they were voting for because candidates had to campaign in secret for fear of their lives and the installation of corrupt power brokers who would lead some of Iraq's largest death squads straight out of the government's own ministries.

Bush trotted down that red carpet in the White House with that peculiarly self-satisfied but self-conscious DT walk of his to declare the Iraqi elections of 2005 successful. But this was before the votes had to be carted away under heavy security to be counted in Jordan, where the results would take months to come out, and the whole sham had the appearance of Preston Tucker proudly showing off his glistening but dysfunctional prototype that was really propped up and leaking oil by the pint. 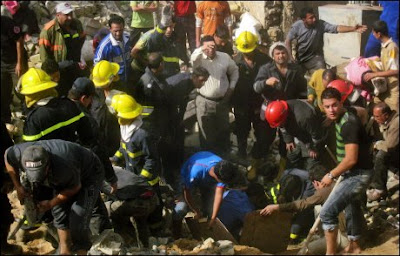 Then, as now, American troops had a large footprint but light footstep, preferring to let the Iraqi security forces handle their own security but the insurgents are still fanning out across the country and targeting minority Sunnis still sympathetic to Saddam's Baathist party driven out of power by Bush and Bremer and only recently de-de-Baathified in a quiet reconciliation.

US troop levels are lower now (96,000) than in 2005 but that still amounts to an unavoidably apparent occupation that still has the tiger of the insurgency by its tail and doesn't know whether to hold on for dear life or to let go, cut and run.

The other difference is that nowadays, Iraq no longer occupies the headlines quite like it used to. That's not because we've made Cheneyesque "enormous progress" or because, as Bush said in his GI Joe moment aboard the USS Abe Lincoln, "Mission Accomplished" but because we're tired of Iraq and wish it would simply go away. We don't bother following the American casualty figures as assiduously as we used to because the death toll has dropped dramatically with our more laissez faire military posture (which alone ought to serve as a convincing argument for a complete and immediate withdrawal).

Yet, nothing significant had changed except that the Green Zone is more vulnerable to insurgent and terrorist mortar attacks than it was five years ago. And several Anglo-American oil companies are jockeying for position to resume sucking Iraq dry of its only one real resource before Saddam nationalized the industry.

Iraq and the massive fuckups and galactic-level greed never took down the Bush administration that was a lame duck one from January 20, 2005 on. Through endless spin doctoring, executive privilege, a cowed, wet-legged, corporate mainstream media and absolute contempt for Congress and its toothless subpeonas, the Bush administration managed to keep itself afloat like the political Titanic it was. They had nothing to lose after Election Day 2004 and they knew it.

The same can't be said for the current president who has never had a honeymoon period with a Congress packed with his own party, is embattled at every turn and is still barely more than 13 months in office. Obama is vastly more vulnerable to any fallout from Baghdad than Bush ever was and fingerpointing and history lessons will do little unless this new president can somehow salvage the political Tucker jalopy left in Iraq that was bequeathed to him.

Update: The death toll, according to this revised AP article, is now up to 36, making it bloodier than the first two elections during the Bush administration.
1 comments

Sadie S. said...
I found you via Yeah, Well, Whatever.

Elections mean very very little. It's surprising, though, how people relate the elections with the actual processes of democracy and change.