Brilliant Recent Posts
Your new insurance policy: Life is a pre-existing...
Did We Really Begin Torturing on 9/11?
So of course there won't be one
That sound you hear is Ann Althouse's teeth gnashing
I may just keep Newsweek after all
Whither Air America?
Once again, when a Republican bashes the left, he'...
OK, I've decided
Let Freedom Ring
Credit where credit is due 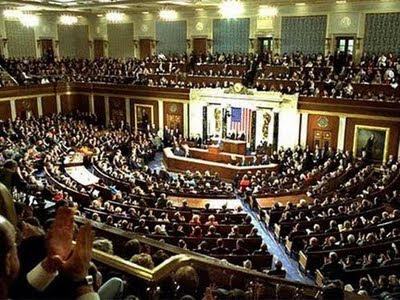 The minority GOP today, along hard-line party votes, successfully blocked two versions of a bill dubbed in the media as H.A.R.M.E.D.: Halt Assault, Rape, Murder, Evisceration and Dismemberment. The bills (HR 451 and S 34) would help shore up gaps in the criminal justice system that already allegedly prevent American citizens from being physically assaulted, forcibly raped, viciously murdered then eviscerated and dismembered.

Senate Minority Leader Mitch McConnell (R-KY) defended his party's votes, saying, "If this isn't a power ploy to take away state's rights, I don't know what is. And besides, I'm sure that we can all think of a few people who need to be weeded out of society." McConnell then coughed and made a sound that some in attendance thought sounded like, "Clinton."

Senator Jim DeMint (R-SC) had his own reasons for opposing the bill that would've guaranteed protections for all American citizens from being hit with sledgehammers, dismembered with chainsaws, raped with electric cattle prods and so forth.

"This bill actually touches on a whole host of assaults on individual freedoms, not the least of which is the right to bear arms, including big ass K-Bar knives."

Rep. Steve King said this: "What's next? Guaranteeing these rights to illegal aliens, outlawing torture? Where will it end?"

The bill, introduced and co-sponsored in the House by Barney Frank and Alan Grayson and in the Senate by Senators Al Franken and Russ Feingold, was a tentative attempt to overturn Bush-era policies that paved the way for abuses by American war contractors. Former Halliburton subsidiary KBR, for instance, refused to hire women unless they waived their right to press charges in the event they were ever raped and beaten.

Rep. Joe Wilson (R-SC) called the bill "a political stunt that tries to shoehorn the federal government in the lives of every recently laid-off worker or henpecked husband who may feel the need to blow off steam once in a while. Americans pride themselves on defending themselves and this bill would take that out of our hands."

Michele Bachmann (R-MN) even put a poison pill provision in the House bill that would exempt liberal and moderate bloggers and Keith Olbermann from protection under the proposed law.

"If this bill passes as is," Bachmann said, resplendent in flowing white robes, "then I invite all the constituents in my district to drink the Koolaid for the last and final time right here on the steps of the Capitol Building."

The Senate version of the bill was successfully blocked when Sen. Joe Lieberman (I-CT) provided the crucial 41st vote that allowed the GOP caucus to block cloture.

"Is this really necessary?", Lieberman said at a press conference. "All I hear from Democrats is Katrina this, health care that, let's stop our fellow citizens from getting needlessly slaughtered. Aren't there more constructive ways to spend our time?"

President Obama expressed disappointment that the H.A.R.M.E.D. bill was stalled in Congress until possibly next year.

"While I strongly disagree with the Republican Party's attempts to block passage of this landmark bill, it's also important that we achieve some sort of a bipartisan consensus so that all parties will be happy." The President also signaled that he'd be willing to drop the anti-dismemberment option from the bill on the basis that postmortem mutilation wouldn't be felt by the already-deceased.
4 comments

John Locke said...
Why do you have no links in your article? Could it be because it's entirely bullshit? When I look up HR 451 it's something about Hispanics. Is this some Onion attempt at parody? Please advise.
10/21/09, 7:13 PM

Serr8d said...
You mean, it wasn't against the law to rape, mutilate, murder and eviscerate, dismember &c. before?

President Obama's delusional quest for bipartisanship in all matters guarantee a one term failed presidency in the present era. If it was in other times in the past it would be a formula for success.