Brilliant Recent Posts
Imagine if John McCain were president right now
Goldman Sachs Again; Worse, Worser, Worst, and Pro...
Iran; Fighting for Truth
Goldman Sachs Best Quarter Ever Means its now time...
But of course journalists and Washington politicia...
And the geek shall inherit the earth
He's Barack Obama, and You're Not!
Oh, well, as long as journalists have health insur...
Around the blogroll and elsewhere: Health Insuran...
Oh, this one just keeps getting better


Kodak Takes Our Kodachrome Away
Posted by Melina | 12:24 PM 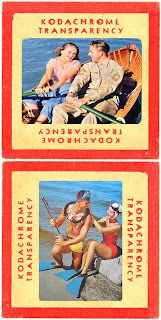 The Kodak Co. announced today that they will be discontinuing production of Kodachrome film. This marks the end of an era for not only many of us who lived in the innocent days of being able to think that all the world could be a sunny day, but the end of an art form that deserves to be preserved somehow. There is nothing like film photography, and doing away with the tools involved in that is akin to getting rid of paint brushes. Still, you cant keep a company from discontinuing a product that doesn't sell well; I just hope that a specialty market will emerge for this vital medium; and there will still be other types of film available. Its just that Kodak was the ground breaker in this, and the quality has been unsurpassed in history.

Check out some of the pictures here from the 1940's if you want an example of how well this stuff holds up. There are endless examples out there on the Google machine.....and here's a big hat tip to Rhymin'Simon, who sure did his part to add to sales of what has become a true American icon. For more information on this check out the Kodachrome Project Forums, which covers just about every aspect this film.

I was thinking the exact same thing, but you said it so well.

I just hope that a specialty market will emerge for this vital medium; and there will still be other types of film available. Its just that Kodak was the ground breaker in this, and the quality has been unsurpassed in history.
6/22/09, 3:05 PM

Nan said...
There's still actual film out there, although Ektachrome does not provide the truly rich, deep color tones Kodachrome did. I still use real film occasionally --it forces me to think more critically about whether or not it's actually worth to take a picture of something.
6/22/09, 6:53 PM
Post a Comment
<< Home
Contact
Home
Email:
brilliantatbreakfast at gmail dot com
RSS