Brilliant Recent Posts
Did Tom Brokaw admit to knowing that Ohio was fixe...
October Surprise
Your Sunday Cute Overload
Letter From a Wingnut, 2012
Obama votes are disappearing in the south and swin...
=sigh=
Alaska is the biggest welfare state in the country
Sunday Big Blue Smurf Blogging: What They Said
Saturday Morning Toonz
This almost makes having had to endure those ads e...


The Shellback Initiation of John McCain
Posted by jurassicpork | 6:01 PM 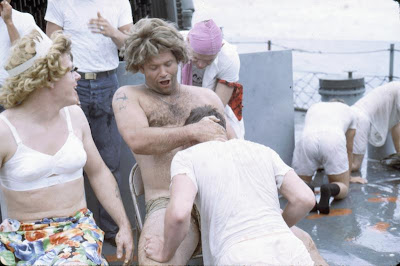 For unknown and unknowable reasons, the Village People neglected to mention this in their famous paean to our nation's Navy. Also ignoring the Shellback Initiation are those really cool Navy recruiting commercials that had once featured the music of Godsmack and the posters that likewise didn't show this fine, nautical tradition or the deck-mopping, barnacle-scraping, mess-cranking and other exalted functions of the n-----s of the Navy.

For those of you who have never been stupid enough to join the Navy (an acronym for Never Again Volunteer Yourself), the Shellback Initiation is for sailors (or pollywogs) when they cross the equator for the first time. It is far and away the singularly most disgusting ordeal to which most humans will ever be subjected. It makes very, very little distinction between ranks. Noncoms and officers alike have it coming to them. If you're a SEAL making your way across the equatorial zone (especially if you still have sand from Coronado Island between your toes), chances are you'll get it harder since you're supposed to be a badass.

The Shellback Initiation varies from ship to ship but here's what it generally entails:

When a sailor crosses the equator for the first time, he is forced to undergo the hazing ritual. It involves crawling through a tunnel on the way to the Kingdom of Neptune. The tunnel, typically installed on the fore of the ship, will be filled with the vilest, nastiest shit on God's earth. Rotten, putrid food and drink, maybe even piss and shit, are thrown in the tunnel.

If the guys in front of you vomit on their way to the Magic Kingdom (as they inevitably will)... the more the merrier. It adds to the aromatic experience.

As you're negotiating your way through this olfactory Purgatory, you will be beaten through the canvas walls of the tunnel by socks filled with other vile shit. If, on the problematic possibility that you actually make it through without passing out, awaiting you on the other end is King Neptune and his bitch.

King Neptune tends to be the fattest, most hirsute guy on the ship (typically a chief or higher). You either have to kiss his belly until he's satisfied that you've earned your way to the Kingdom or, if your shipmates really want to put you through the ringer, they'll make it even more challenging. Some ships, like the one I was on, would insert into this fat slob's navel a maraschino cherry, olive or cocktail onion and you'd have to pick it out with your teeth.

Oh, did I mention that, in order to raise the degree of difficulty, they slather King Neptune's ample belly with axle grease, oil, mustard or whatever else they can get their grubby hands on? Yeah, there’s that, too.

At the end of this complete waste of time and taxpayer dollars, you're then given a card and you'd better keep it. It's like those tickets you get at booths on toll roads. Lose it and you pay the full price. In this case, you'll have to go through the shit (literally) all over again the next time you cross the equator.

What we're seeing during this election is the Shellback Initiation of John McCain. It all started out harmlessly enough.

First, Commodore George W. Bush (Honorable) and First Mate Richard Cheney threw in the tunnel some stale Koolaid that was first mixed during the Reagan years. And, since nothing tortures like torture itself and, after a brief maverick period in which he tried to back out, McCain then gamely proceeded through the electrodes attached to battery chargers, being snapped at by attack dogs and, for good measure, some of Kurt Weldon’s Freedom Fries from 2002.

The Christian faction of the ship of state tossed in some goodies of their own, including venom from the snakes they handle during their Hosanna sessions, holy water and fresh bile from the bile ducts of James Dobson, Rod Parsley and John Hagee.

Corporatists also anted up with petrodollars sodden with real petroleum drilled from offshore and putrid Halliburton water laden with bacteria from the Euphrates.

His own campaign provided the coup de grace by inserting near the exit of the tunnel stale semen from some mullet-headed redneck who knocked up his running mate's daughter. He has to say at least once, "I'm John McCain and I approve this unwanted pregnancy, sir!"

Then, at the end of the tunnel, awaits King Karl, the Lord of the Watery Underworld and his wife, Sarah Palin. It was long and arduous, the trip through the right wing tunnel, but tradition is tradition and McCain is now officially a political shellback. Or, he would be if King Karl the Kingmaker was satisfied with McCain picking that olive from his greased-up navel. The problem is, Queen Sarah and he make a pretty bad couple and King Karl’s never quite forgiven him.

No doubt, John McCain ought to be proud of his own political migration across the equatorial line that separates moderate Republicans and Democrats from the stupid, cruel factions that have held his own Shellback Initiation. But there are others who aren’t impressed, no matter how many times John climbs through that narrow, fetid tunnel on his belly and that coveted, ever-elusive Shellback card will never be his.
7 comments

Bob said...
Do they still do this in such a vile manner? What about carriers, where there are hundreds of eniisted sailors, officers & pilots, male & female, eligible for the hazing? I knew it was gross & difficult to go through, but didn't think it was that bad. Ugh.
10/27/08, 6:58 PM

Anonymous said...
Excellent description of what we're enduring - disgusting. But I didn't sign up for the Navy; how can I get off this sinking ship? In 8 days maybe the bilge pump will start working again....maybe.
(P.S. What the heck kind of bra is that?)
10/27/08, 11:21 PM

deuddersun said...
Holy shit! Next time I see some poor swabjock, I'm gonna buy him a beer and a shot to help get the taste outta his mouth! And I thought pinning stripes was bad...

Gordon said...
I think the silly shellback ritual is a lot tamer these days than it used to be back in the good old days of rum, sodomy, and the lash, but you had to be that cynical about it to set up the second half of your post which nailed those Repug bastards dead nuts. Good job.

Anonymous said...
I just did the shellback initiation last year, as a female Sailor. They used nothing but water, and we had a blast!
10/30/08, 6:08 AM
Post a Comment
<< Home
Contact
Home
Email:
brilliantatbreakfast at gmail dot com
RSS