Brilliant Recent Posts
Presidential Penis Prevails, Senate's Face Red Onc...
If it's going to be wrecked anyway, let's party li...
Or what? Or we shall taunt you a second time?
But winning the war will magically take care of th...
Now all they need to do is learn to write a cohere...
Welcome Back Potter[sville]
John McCain gambles. Why does he never report any...
John McCain: Expert on gaming the system
What flip-flop?
Is this where Americans will FINALLY draw the line? 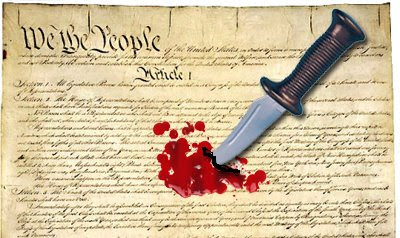 And so it ends, this Great Experiment of ours, this free nation forged by a bunch of hemp-smokers and womanizers who dared say no to a king and founded a nation that not so long ago was not just the most powerful nation on earth, but one admired and emulated by the rest of the world.

No longer does the rule of law take precedence over the insanity of a despotic leader. No longer does the document in which the laws that make this country what it was mean anything. It's all about perception, and not the perception of the voters, but perception of the media talking heads with their marching orders by their corporate masters to ensure that only those who would consolidate as much wealth as possible into the hands of the few, who would yoke the unwashed, impoverished masses unto themselves in a state of permanent indentured servitude, grateful for the scraps fed to them like dogs after the CEOs and board chairmen get done stuffing themselves to stupefaction, make it to the finish line.

It didn't all die today, of course. This country has been an aspirated corpse on a ventilator, a Terri Schiavo of nations, if you will, ever since the USA PATRIOT Act was passed by a House and Senate full of cowards who were too lazy to explain to the American people that turning this country into East Germany circa 1965 is not the way we defend freedom against attack.

And Barack Obama -- our party's nominee, the guy who told a generation of young people too young to remember how they killed our prophets while we stand aside and look, the guy who for a few brief moments made us think that perhaps -- just perhaps -- he might be even one iota different, succumbed to the siren song of unfettered power and said "Want. Srsly." -- as he pushed the "Yes" button when voting today.

A president completely discredited by three-quarters of the American people still has the power to cow 535 representatives into submission simply by threatening them. Whether it's threatening them with exposure of misdeeds, or threatening them with terrorist attacks for which he will hold them responsible (when he knows exactly when and where they will take place because he will allow them to happen, just as he did last time because he wanted the war and he wanted the power and he wanted Americans to be willing to give up their freedom so he could try to fill the empty hole in his soul with more money and more power), or whether it's all a sham and they're all on the same team -- the result is the same.

The rule of law only applies to us -- the citizens of what used to be the United States. And the government will be watching us for any transgression, no matter how slight. One out of every six Americans serving prison time today are in for nonviolent marijuana offenses. In some states, a felony conviction means your right to vote is rescinded forever. A president was impeached for lying about a blowjob in a civil case that had no right even being heard at that time. But today, thanks to Nancy Pelosi, who upon becoming Speaker of the House in 2007, declared herself to be George W. Bush's protector against impeachment, and Harry Reid, with his sternly worded statements with no teeth, and a bunch of venal, greedy cowards who inhabit the People's House, our elected officials, the people who long ago forgot that THEY work for US -- are no longer bound by the rule of law.

The flag for which generations of American boys have died was spat on today in the Senate -- defiled beyond recognition in a conflagration that dwarfs any protest by an irate citizen. Some of the same Senators who felt it so important to protect the flag that they would have voted for a Constitutional amendment to protect it, no longer think the Constitution is even relevant. They would protect the flag against one person trying to make a statement, but they won't protect it against an insane president and sixty-nine corrupt, craven Senators who have zero understanding of what the flag really means. It's not a cheap Chinese-made trinket to put on your lapel at election time in a display of faux-patriotism. It's not something to grandstand about when it's politically expedient. That flag stands for the document that the Senate defecated on today. The flag stands for the Great Experiment which has now irrevocably failed. Or at least it used to.

And the damnedest thing is that those sixty-nine Senators didn't even have the balls to set the damn thing aflame.

Anonymous said...
Schlosser may have a valid criticism of marijuana laws, but he is way off base in his statistics about violent crime. When he says "the average sentence for a convicted murder in this country is about six years. In the state of California, the average prison sentence for a convicted killer is about 3.3 years," he's talking through his nether regions. If he's so grossly wrong about that data, where I know he's wrong, I'm suspicious of the accuracy of the rest of his information.

A murder conviction in California in recent years pretty much results in a de facto life sentence, whether the formal sentence is "15 to life," "25 to life," "life without parole," or "death." In all those cases, those convicted go to prison and stay there indefinitely, with only a lucky few ever getting paroled. Here is a discussion I participated in back in 1997 where I dug up the actual data on parole rates from 1993 and 1994. As I said there:

If we look at (# paroled)/(#paroled + #remaining in prison at year end) as a rough index of how likely a prisoner convicted of a given crime is to get paroled in a given year (whether or not technically eligible), we find that the parole board released 17 out of 11,642 convicted murderers in 1993 (0.146%), and got even more selective in 1994, releasing only 7 out of 12,575 (0.056%). If you get convicted of murder in California, I wouldn't hold your breath waiting for parole. In fact, it looks like it's only slightly easier to get paroled than it is to get executed for murder in California at present, especially if you restrict attention to those convicted of 1st degree murder.

I discussed that "average six year term for murder" statistic further here, here,
and here. In a nutshell, it's a badly distorted interpretation of a study of the average time served by people convicted of any form of homicide *who got paroled* in 1992. Because most murderers don't get released, this is basically the average term served for manslaughter, not murder, with a little bit of the most lenient sentences for murder mixed in.

While my data above is several years old, things haven't changed much in California since then. Under Grey Davis, parole for murder disappeared almost entirely - I believe he allowed only two convicted murderers to be paroled during his entire term in office, both battered women who had been convicted of the murder of their attackers. Schwartzenegger has been a bit more lenient - I think he has allowed perhaps a few dozen parolees during his term. In any case, it is still incredibly rare compared to the population remaining in prison.
7/10/08, 6:30 AM

D. said...
Thank you for saying this.

I hear that some of our legislators expect that this law will be overturned in court.

1.) They haven't exactly been paying attention, have they?

2.) To assent to bad law because one believes it will be overruled is cowardice.

3.) At this point only one Supreme Court justice stands between rightist despotism and such few freedoms as we still have--and if any of the non-RATS justices resigns or dies before 1/20/09, guess what? (RATS=Justices Roberts, Alito, Thomas, and Scalia. The obvious puns were sat upon.)

Anonymous said...
Makes me so sad today. As a practical matter, I understand the "move to the center" thing. But as a person who, perhaps more than most, believed Obama had more principle than most Democrats...it's painful to realize he'll put pragmatic election concerns over what is right and decent.

kelley b. said...
What is this whimper you speak of?

I hear far away above it all, the demented laughter of the Aristocrats who would rule us all with an iron fist.

Please do not mistake my intent here. This is a very good post. It is so good, in fact, that I think perhaps instead of whimpering, you, too have learned how to growl.
7/10/08, 10:30 PM

Anonymous said...
Excellent. I love your writing style even if the subject matter made me groan.
7/11/08, 2:05 PM
Post a Comment
<< Home
Contact
Home
Email:
brilliantatbreakfast at gmail dot com
RSS