Brilliant Recent Posts
Because the television news industry has decided t...
Pardon me if I don't take up a collection for them
Friday American Idiot Blogging
Friday the 13th Mouse Blogging!
I have nothing more to add to this
Friday Cat Blogging
Quote of the Day
Another city drowns, and the Bush Administration d...
Pouring money down an empty hole
Third Time's a Charm? The Supreme Court Rules That...


Has it really come to this?
Posted by Jill | 2:33 PM
Does a man have to be a self-destructive asshole to be a "real man"? Why the fuck was there even a need to hesitate about this?

Sure, there's world wars and toxic pollution and corruption and Social Security reform and a few other things like trillions of dollars in debt to worry about.

But before getting to those easy issues, politicians who want to be chief executives must first get elected. And to do that they must decide if they're going to wear funny hats.

It's the bane of most big-time campaigns. And why you don't see candidates so often visiting construction sites; hard-hat zones, where they must don those funny-looking helmets that sit so high on their head. They may save lives, but they scare image-conscious campaigns.

Remember in 1988 Gov. Mike Dukakis driving that tank? It's a lot of fun. Looked good on paper to associate him with defense issues, a traditional Democratic weak spot. But you gotta wear the XL helmet. So he did. He looked like a pretender. And the rest is doofus history.

Long before him, there was the classic headgear disaster, Calvin Coolidge in the Indian headdress. Scroll down for that baby.

So, even though he's a freshman senator and a rookie national campaigner, Sen. Barack Obama faced a quandary last weekend.

Should he wear one of those stupid-looking bicycle helmets that legislators say we must wear but only look good on Tour de France racers? And get mocked? Or should he go without the hapless headgear and get criticized for defying the law? Who does he think he is? Above the rules that apply to everyone else?

These are everyday decisions now. Obama opted for the hat. At one of two lucrative campaign fund-raisers in Chicago Thursday night, at the home of a businessman who donates bicycles to charities, Obama couldn't resist a little boasting. He explained that he faced a tossup: Risking ridicule or sending children the right message about bike gear.

"I had an internal debate," Obama admitted when a supporter thanked him for wearing a helmet. "Because I knew that the AP was going to take a picture, and they were trying to portray it like Dukakis wearing that tank helmet.

"But I wanted to make sure that the children who saw that picture knew that even the Democratic nominee for president wears a helmet when he goes biking," he said to applause.

"Now, obviously the rest of my apparel was apparently not up to snuff, because I got a hard time from all sorts of blogs ... who said I looked like Urkel."

There was a need because Barack Obama has learned that anything he does, any step he makes, is going to be closely scrutinized to see how well it fits the "wussy-ass Democrats" meme so beloved by the mainstream media that is spending the day congratulating itself because it knew Tim Russert.

The photo of Obama that accompanies this article shows him riding on a city strett. I live in New Jersey, and if you DON'T wear a helmet you are taking your very life in your hands. Whether Obama is elected or not, he has two young daughters. So why should he even have to think twice about whether wearing a helmet is the right thing to do when riding in city traffic?

I guarantee you this guy never thought twice about whether the media would paint him as a wuss for wearing a helmet: 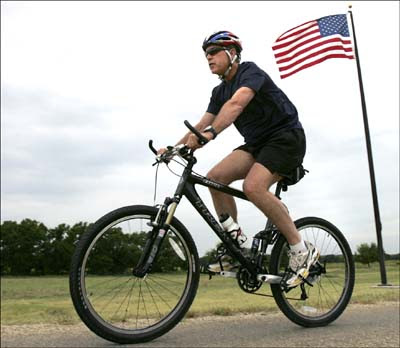 Of course that guy showed he was a real man by dressing up in a flightsuit, stuffing the crotch with socks, and sending 160,000 kids off ot Iraq to die. And he said lots of tough stuff like "Bring 'em on" and "Dead or alive" and all that cowboy stuff the pencildicks in the media so adore to hear.

ChenZhen said...
Perhaps one of these days, Obama's detractors will make up their minds. You know, I'm not sure if one can be a Marxist out to destroy America and a dork at the same time.
6/14/08, 10:20 PM