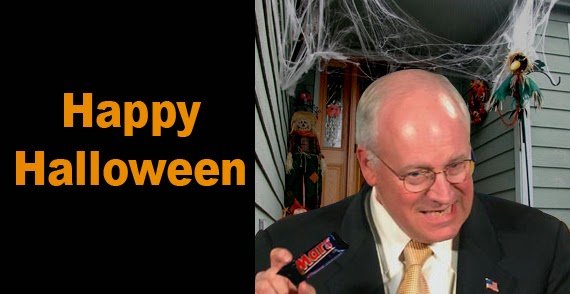 This is one of my favorite  jpegs ever out of the countless thousands I've used and made over the years, this one having been used as the lead image from probably my favorite (and longest) Assclowns of the Week ever, the Halloween edition from 2005.
Of course, the scariest things facing us this Halloween will fill up more Depends adult diapers than anything we'll see on the Main Streets of America tonight. Wendy Davis is losing to FDR's evil twin (aka Greg Abbot) by 20 percentage points, according to one poll. Nate Silver's saying the Republicans actually have a 62% chance of retaking the Senate as well as holding on to the House. Greg Palast and al Jazeera recently exposed a 28 state Republican plot that essentially purged 7,000,000 voters off the rolls for the flimsiest of reasons, if any at all, and no one's doing anything about it.
Not that he's been any great shakes but if the GOP grabs control of all of Congress, Obama's basically going to be the lamest of lame duck Presidents and for the next two years will be like a house nigger with a 500 pound ball chained to his ankle until his house arrest is over in 2017.
And you idiots will have no one to blame but yourselves. If the last midterm election's any indication, less than 37% of you morons will come out to vote, which is typical for midterms because maybe you think your guy or gal can't possibly lose or because the White House isn't at stake. Such thinking is what gave the Republicans the fucking House in 2010.
True, we'll win some races but we'll lose even more because you couldn't be bothered to get your doughnut-distended derrieres off your aptly-named Laz-E-Boys. And if the GOP takes the upper chamber, well...
...Well, even if there's some truth to the persistent liberal hope that Obama would finally pull out all the stops and go all Nat Turner on the GOP's fat, pasty ass by doing the things we've been waiting six years for him to do, well, that sandbagging will have to continue for another two years because a GOP-dominated Congress ain't gonna let those goodies out of the bag.
No, it'll be all tricks and no treats until January 2017. Darrell Issa's endless hearings on Benghazi and Fast and Furious will continue and the Speaker of the Oompa Loompas will continue his frivolous lawsuit suing the President for something, anything and "I" word will continue to be The Topic on the Washington DC cocktail circuit.
Greg Abbott will get elected and Texas will turn redder than Karl Marx's asshole after a Commie gay sex orgy because you lazy losers decided to stay home. And if you think I'm wrong or pessimistic about what I'm saying here now come back to this forum this Wednesday morning and show me how I was wrong. I'll be live-blogging Election Night here for the one or two people who will care to come here but mark my words: There won't be any major surprises on Super Tuesday. This is one time when I believe most of the polls.
And those who didn't vote will piss and moan while playing Wednesday morning pundit that gerrymandering is what did us in (you know, the same shit we were puling about after Election Night two years ago). But gerrymandered districts do not account for Republican victories and will not work if you still get off your asses and vote despite all the stumbling blocks the vote-caging fascists of the GOP throw between you and your polling place.
Because, while the latter-day Democratic Party has the cajones of a Ken doll, they're not the ones who are nakedly and viciously grasping at every and any opportunity to disenfranchise you and your vote. The GOP and their corporate employers are against you breathing, eating, marrying within your gender, your children getting to live out their lives and are successfully selling the only commodity they have: Hatred, bigotry, fear and division.
The GOP this year is the same one as the election cycle before that and the one before that and the one before that: They are the party of Old, White Male Oligarchs who shouldn't have enough people in their base to carry hundreds of elections yet somehow they do. Because you Democrats and Independents can't get off your asses and drive the mile or two to your polling place and give ten minutes out of 24 months.
So if you didn't vote, I don't want to hear any shit from you on Wednesday about how it sucks that Wendy Davis got steamrolled by Greg Abbot's wheelchair or how unfair it is that Scott Walker got re-elected or that Paul LaPage got re-elected Governor of Maine by double digits. Gerrymandering and racist Republican dirty tricks wouldn't work if Democrats and all people of conscience get the fuck out and vote that conscience.
Because of you don't, every fucking day and night for the foreseeable future will be a real life Festival of Samhain.
0 comments