It's been a long time coming
Posted by Jill | 8:18 AM
Last December, I spent two weeks in North Carolina, beginning the daunting task of clearing out my mother's house. Looking back now at the videos I took while I was there, it's amazing that it took ONLY five months to go through what was in that house. Since the beginning of the year, my sister has been in charge of the entire cleanup operation, with a little help from her friends. I've felt guilty all along that I wasn't able to do more, especially when boxes of old family photos, reports I wrote in junior high school, Mom's old autograph book from high school, medical records from her second husband's bout with recurrent thyroid cancer which may once and for all clear up the mystery of exactly what he had, slides from our childhood which I am slowly digitizing, and other memorabilia kept showing up for three months. And that's not to mention the moving truck containing 21 boxes of the Great Teddybear Apocalypse of 2013, an oak vanity and dresser for which I had to find room, a jewelry armoire to hold the costume jewelry I actually kept from Mom's compulsive shopping (never mind the four huge "swap shops" I held at work for bags and bags of the stuff), and The Fucking Victrola, which I immediately had carried over to my neighbor's house, where it looks perfect in their home office.

The Story of the Fucking Victrola is essentially Mom in a nutshell. She had purchased a 1920s upright Victrola for $75 at a flea market when I was in high school. She and her husband had fun with it for a few days, and then it became just a piece of furniture after the novelty wore off. Because I've always loved 1920s music, I coveted this thing terribly, especially when I moved out on my own. When she and her husband moved to Maine, I asked if I could have it, and she said no. Thirteen years later, after her husband had died, and I was going to be driving her to North Carolina for her move down there, I asked if I could have it -- we could load it into the car and drop it off at my house at our overnight stay there. She said no. Mom by then no longer gave a rat's ass about this Victrola, but she was damned if she was going to let me have it. I don't think she even thought about it for twenty years, except to tell me when I asked if I could have it because I would enjoy it, that she might yet use it someday, and saying "You can have it when I'm dead." That's Mom for you -- always withholding, always keeping score, and unwilling to part with anything.

Around ten years ago, I finally broke down and bought my own Fucking Victrola. Mine is a tiger oak Victor VV-VIII, from around 1918. It's gorgeous, though with the lid closed it looks a bit like a casket for a medium-sized pet. I don't play it much, but every now and then I pull out one of the very early records I have and take it for a spin. So when Mom died and I could finally have that Fucking Victrola, I really didn't need or want it anymore, and I didn't have any place to put it. The one I have is more compact and easier to deal with. But I was not going to let it just go. So now my friends have it, they love having it in their home office, and it's with people I know and like.

Towards the end of her life, Mom started to realize just a bit how much pure STUFF she'd amassed. In her last two years, we'd do "jewelry purges" when I'd come to visit. It's not that she bought good stuff, but she bought a lot of it. She was starting to realize that all the better costume jewelry she'd been "saving for good wear" was never going to be worn, and we'd go through drawers and armoires of the stuff, whereupon I'd take it to work and let my co-workers pick what they wanted. I think the only thing more powerful than free chocolate for building goodwill is free jewelry. And Mom got a kick out of knowing that this necklace went to a prom, and that pair of earrings was worn by a bride on her wedding day. One day a friend came to work in a beautiful pair of teardrop earrings that appeared to be diamonds. I commented on them, and she looked at me as if I had two heads and said, "they're CZs...and they're YOUR mother's earrings!" In December, even after those huge purges, my sister and I sat down and spent an entire day going through what was left of it -- and filled boxes and boxes of the stuff, categorizing it as "give away", "donate to thrift shop", "try to sell on Ebay."

It wasn't just jewelry and teddybears, either. Mom's house has two walk-in closets, and only one corner of one of them held clothes that she actually wore -- housedresses and muumuus, many of them with stains on them. These closets were packed full of chothes, most of which she never wore, much of which still had tags. Every storage trunk, every drawer, every plastic storage unit in her closet, was packed with T-shirts sweaters, dress tops, all from QVC, Coldwater Creek, or J. Jill, still in plastic, never worn. This summer, size XL ladies in Pittsboro, North Carolina and vicinity who patronize the local thrift shops got lots of new clothes.

Clothes. Bedsheets still in their plastic packaging. Handbags, some still with tags on them. Shoes still in boxes, some still arriving weeks after she died. Dresses, some duplicates, all with tags on them. For five months, my sister was sending family memories to me via UPS, taking stuff to the thrift shop, and the stuff that just wasn't nice enough to donate went to the "swap shop" at the dump, where people would come and pick the stuff up to use or sell at their own garage sales.

I came to think of Mom's things as being liberated -- freed from the closed-up, blinds-drawn prison of her own making to at last enjoy life. The jewelry got to go out and have fun. The Fucking Victrola is with people who will enjoy it. The piano she played for barely six months until her piano teacher moved away went to someone who will play it. A bunch of the less-collectible teddybears went to a group that sends bears to sick kids in Israel. The Hoosier cabinet you could hardly see is with a friend of my sister's, where it looks gorgeous in her house, festooned with fresh flowers. The Boyds Bears were donated for tricky tray baskets to a fundraiser that a local motorcycle club did for two local families facing catastrophic medical expenses. The oak dresser gives me much-needed additional storage. The vanity replaces a crappy one she'd bought me that never was stable enough to hold anything. Finally I urged my sister to just call a junk hauler and have the dregs of what was left carted away.

And now my mother's house itself is being liberated -- liberated from the gloom and depression and hopelessness that our mother inflicted on this lovely little house for eight years. The house is in a wonderful community called Fearrington, in Pittsboro, North Carolina. It's not gated, but it has a small "downtown" with a bank, hairdresser, restaurants and shops, a pool, health club, and walking paths (some nice photos here). It has all the advantages of a planned community but still feels like a neighborhood. My sister has completely renovated the house -- new paint inside and out, new hardwood floors in the foyer, living room and kitchen, refinished parquet floors in the family room, and an all-new kitchen with maple Shaker-style cabinets, granite countertops, and brand-new appliances. The carpets have been freshly cleaned, and the house is in move-in condition. It has a huge 2-car garage with pantry shelves and a storage closet, tons of storage in a ladder-accessible loft in the master bedroom, 2 full baths (one with stall shower, one with shower-over-tub), two bedrooms, another loft that can serve as an office or guest room, an office alcove that could also serve as a pantry or workshop, a screened porch, gorgeous deck overlooking woods and a creek. 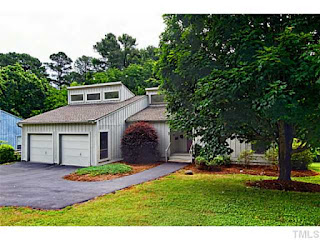 It's a short drive to supermarkets and shops, a short drive in the other direction to the cute downtown of Pittsboro, which has the coolest 1930's ice cream parlor ever. It's a wonderful little house in a great location, and it's ready now to be liberated like the rest of her stuff -- ready for a new family to move in and fill it with the love and laughter that this house deserves; ready to provide memories for a family to cherish. I'm not just astounded by the amazing work my sister has done on this house, but I'm also thrilled at the prospect of people who will love this house moving into it. I know that Mom is finally free of the steamer trunks of emotional baggage that she carried through her life. I know that her stuff is with people who will genuinely care about it. And now it's time to let the light into her house, both literally and figuratively. So if you, kind reader, are planning a move to the Triangle area of North Carolina (alas, my job keeps me in New Jersey for now), or if you know someone planning a move, please pass the word on. The full listing is here, and a virtual tour here.