Brilliant Recent Posts
We can't say we weren't warned
One of only two Senators still standing up for the...
The only Democrat I will give money to in this ele...
Thanks to Bill Clinton for going there
The New Deal: Sacrificed on the altar of Barack O...
Now here's something to look forward to
Oh fer cryin out loud...
Here's how demented I am
America at 235, Bush at 65
Ohio isn't leaving anything to chance in 2012 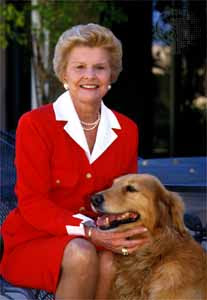 Too bad the trail seems to have ended.

My first reaction to the news of the passing of Betty Ford last night at the age of 93 was "Well, she had a good, long run." My second reaction was a profound sadness, because it all came rushing back to me just what a groundbreaking figure she was, and about how much the role of the First Lady has backslid since Gerald Ford ran for re-election in 1976 and people sported buttons that said "Betty's Husband For President."

Today, the perfect Republican prospective First Lady is quiet, unassuming, has that glazed thorazine stare, looks adoringly at her husband and says little else, and most importantly, keeps her mouth shut. Maybe she can take on libraries as a cause, or some vague thing the press refers to as "education", but mostly her job is to wear elegant but modest dresses to state dinners, kiss babies, and show the country just what a swell guy her husband is.

In the years since Betty Ford left the White House, we have had two First Ladies who didn't match that expectation, and both of them have been Democrats. We all know the kind of crap Hillary Clinton took from the right and the media for having the temerity to believe taht being First Lady meant you could do more than just, as she famously (and tactlessly) said, "stay at home and bake cookies." Now we have Michelle Obama, a successful attorney, who is taking no end of crap for having the temerity to suggest that we should get kids eating better and getting outside and moving around.

Hillary Clinton may have been the first feminist-era First Lady, and Eleanor Roosevelt may have been the first one who was actually a feminist (before the word even existed), but Betty Ford brought a radicalism to her role that perhaps no Democratic First Lady could have. Her brief time in the White House was a "Nixon Goes to China" moment in our history; a time when a World War II-generation woman "got with the program" and showed that it's OK for a woman to be human.

Today we have marathons and fundraisers with pink ribbons and baseball players who wear pink socks for breast cancer awareness, but before Betty Ford announced to the world in 1974 that she had undergone a mastectomy for breast cancer, the disease was something to be hidden; something shameful. To the extent that there has been progress with this disease it is because Betty Ford "took it out of the closet." I know a woman, a few years younger than I, who is currently undergoing chemotherapy for breast cancer. She is strong and fierce and unfortunately is the one who has to reassure everyone she tells when they get, as she calls it, "the sad face" upon hearing the news. To the extent that we can celebrate any death, the fact that Betty Ford made it to 93 after treatment should give her hope at a time when she and everyone around her needs it.

When I went looking for just the right photo of Betty Ford, I found that when you search Google Images for "Betty Ford", you get plenty of photos of the former First Lady, but also many of Lindsay Lohan, and so we move on to what is perhaps Mrs. Ford's greatest achievement -- revealing that it isn't just poor people and people of "bad moral character" who become strung out on drugs. When you look at the wives of today's Republican candidates, which one of them do you think would have the guts to attach her name to a substance abuse rehabilitation center? The Betty Ford Center was founded long after Mrs. Ford left the White House, but she had already earned her place in the hearts of Americans -- a place that allowed her to gently tap on the door behind which lay tens of thousands of substance abusers and say, "I am one too, and there is help for you." When you look at the glazed stare of so many Republican women, you wonder how many of THEM are strung out, but in today's judgmental climate, it's hard to imagine any potential First Lady having the guts that Betty Ford had back in 1976.

Betty Ford favored abortion rights, she favored passage of the Equal Rights Amendment, she was sanguine about possible marijuana use and cohabitation by her children -- she was the kind of "cool mom" that it was hard to imagine in those days, when so many of our parents had been utterly freqked out by what had gone on over the previous ten years. And she was a Republian, no less.

The passing of this remarkable woman isn't sad because of her death itself. Most of us would be grateful to live for 93 years and leave behind a legacy of kindness, nonjudgmentalism, and making a difference in the lives of breast cancer patients and their families and friends and of those trapped in the maw of substance abuse. It's sad because when we look back at the life and work of Betty Ford, and we think about the war that her political party has declared on women who are not fundamentalist Christians, we realize just how much we've lost. Betty Ford blazed the trail, but we have been remiss in continuing to clear the way for future generations of women.

Leslie Parsley said...
A beautifully written tribute to a most remarkable lady. And the sad thing is, she would be loathed by the conservatives of today. But, in her usual hypocritical fashion, that didn't stop Bachmann from putting up a tribute to Ford on her FB. I doubt if the likes of Bachmann has any real understanding what Betty Ford represented or what she stood for.

Rose said...
I loved Betty Ford. She was a great lady. And don't let the Lindsay Lohan photos bother you. Lindsay may "re-invent" herself in the near future and turn into a winner, just as Robert Downey, Jr. did.
7/10/11, 9:59 PM
Post a Comment
<< Home
Contact
Home
Email:
brilliantatbreakfast at gmail dot com
RSS