Brilliant Recent Posts
Crossing the Line
Which party would you rather have a beer with?
DemCon I: The Upliftinging
Chris Matthews was right.
The Day the Rev. Sun Myung Moon was declared the M...
At last...the real reason Republicans want to ban ...
Meet my new short-duration personal hero
Word.
Saturday Music Blogging: Four Chords
It's always Florida


The Most Pathetic Moment of Last Night
Posted by jurassicpork | 12:16 PM 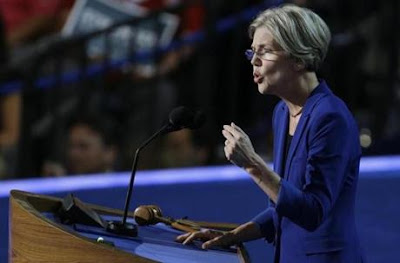 "American families didn't have an army of lobbyists on our side, but what we had was a president—President Obama leading the way. And when the lobbyists were closing in for the kill, Barack Obama squared his shoulders, planted his feet, and stood firm." - Massachusetts Senate candidate Elizabeth Warren at the Democratic National Convention, Sept. 5, 2012

...was watching poor Elizabeth Warren have to step up to the microphone at the convention and rah rah sis boom bah for the same craven piece of shit who threw her under the wheels of the bus.

Elizabeth Warren's a smart lady, no doubt about it. Even when I saw her at a slight distance in Marlborough, MA last Monday, I got a sense of her intelligence as well as her sincerity and vivacity. She's almost the only person in America who passes my stringent muster of what a true liberal is (then there's our homie, presidential candidate Dr. Jill Stein, but that's fodder for another pre-election post).

And that's why Liz Warren's speech was both the most uplifting yet dispiriting moment of the night. It was a strangely bifurcated, Jekyll and Hyde monologue that seemed to have been Frankensteined together by both her and an Obama speechwriter.

There was Warren on her now-familiar soapbox, railing about corporations and the damage they'd done to this country and their subsequent sociopathic reaction:

People feel like the system is rigged against them. And here's the painful part: they're right. The system is rigged. Look around. Oil companies guzzle down billions in subsidies. Billionaires pay lower tax rates than their secretaries. Wall Street CEOs—the same ones who wrecked our economy and destroyed millions of jobs—still strut around Congress, no shame, demanding favors, and acting like we should thank them.

Oh, fuck yes. Honey, where are my cigarettes?, I'm sure liberals from coast to coast said as they made their best O faces. It was essentially a strap-on buttfucking of Wall Street with all the sand and none of the lube. And then the almost obligatory, "Barry, Barry, he's our man!" moments thrown in to legitimize Warren's presence at the convention and elevate it from a mere campaign stop:

After the financial crisis, President Obama knew that we had to clean up Wall Street. For years, families had been tricked by credit cards, fooled by student loans and cheated on mortgages. I had an idea for a consumer financial protection agency to stop the rip-offs. The big banks sure didn't like it, and they marshaled one of the biggest lobbying forces on earth to destroy the agency before it ever saw the light of day. American families didn't have an army of lobbyists on our side, but what we had was a president—President Obama leading the way. And when the lobbyists were closing in for the kill, Barack Obama squared his shoulders, planted his feet, and stood firm.

Warren, despite her complete lack of political experience, is nonetheless savvy enough to know what's expected of her and what's good for the party. A fire-breathing liberal she may be, she's also no loose cannon and the last thing the Democratic Party needed last night, especially after the Israeli imbroglio, was another Zell Miller.

Yet would she have been an apostate, a traitor to the party. for bringing up the inconvenient fact that Barack Obama folded a couple of months after the stupendously corrupt Republican Party to a man stood against Warren's nomination to head up that consumer financial protection agency and never let her name get out of committee, then quietly dropped her name and nominated someone else? It obviously never occurred to Obama that if he'd backed his first choice, he could've worn the Republicans down. But courage except in bitch-slapping liberals behind gated mansions at $30,000 a plate fundraisers in Connecticut was never in Obama's psychological makeup.

In fact, the only people who've felt the lash of Obama's courage happen to be the liberals and progressives who'd gotten him elected, and countless hundreds of helpless men, women and children who've been killed by his endless drone strikes, many of them being retroactively labeled as terrorists or potential terrorists because they were within a certain age group and the blast radius.

Listening to Liz Warren last night was almost like listening to two different Liz Warrens, the one we've come to know and love since before Barack Obama threw her on the tracks of his bipartisan express, the one who transcends mere populist rhetoric such as spurted out last night by a typically glib Bill Clinton, another elephant in donkey's clothing, into passionate sincerity when addressing the plight of the working class.

But since she was fitted into the tough blue hide of the party's platform message, there was no chance for irony in mentioning how Obama threw her to the wolves yet nominated a man in her place and stuck by him even to the point of making for him a recess appointment that he could've just as easily had made for Warren.

Then she continued with a lyrical flourish that was another reaming, this one aimed directly at Mitt Romney's rectum...

No, Governor Romney, corporations are not people. People have hearts, they have kids, they get jobs, they get sick, they cry, they dance. They live, they love, and they die. And that matters. That matters because we don't run this country for corporations, we run it for people.

...only to bring us back down to earth by continuing,

Right. That's why he's caved to the Republican Party and extended the Bush tax cuts time and again while freezing pay for federal workers for two years in the midst of a mild depression every time the "loyal opposition" held unemployment benefits hostage. That's why he authorized the second half of the TARP bailout knowing damned good and well that the Wall Street executives who got a tongue-lashing from Warren last night would use it to give themselves billions in bonuses. That's why Obama, like Romney, is seriously proposing cuts in Medicare and Social Security after cutting the Social Security tax by 2%. That's how much Obama "believes in a country where nobody gets a free ride or a golden parachute."

Essentially, what Americans are left with is a choice between the Yorkshire Ripper and Jack the Ripper. And Americans who are scared off by the cold and clammy Mitt Romney and his Eddie Munster ventriloquist doll will vote for the guy who has less kills to his credit and just looks friendlier, the kind of guy "you'd want to have a beer with."

As he continues drone-striking the Middle East, central Asia, the American working class and the US Constitution.

Fortunately, as Mike Flannigan said yesterday, we do not live in a two party democracy. We've only been conditioned to believe that. There are other alternatives because to those precious few of us who still have powers of discrimination and are sick of using our votes to vote against instead of for, both parties would be hilariously dysfunctional if our current state of economic ruin was a laughing matter outside of China and Saudi Arabia.
5 comments

Patricia said...
You always say it so much better than I ever could. You really are brilliant. The whole time she was speaking, while gulping the shabby red wine I can barely afford was that she shouldn't be running for the senate. She should be directing The Consumer Protection Bureau. My fear is that Wall Street money will win and Scott Brown will win. The game is rigged all right.
9/6/12, 1:04 PM

KanaW said...
Unfortunately, the only other choice we have is to get a third party with some power from the ground up.

Voting a third-party President in will be completely useless without enough of his/her party in Congress to provide backing.
9/6/12, 1:22 PM

Bob said...
She's a true liberal, but I have been critical of her campaign, promoting a sizzle that isn't there, as if their enthusiasm would make her a more appealing candidate to the general public. She clearly resembles Mrs. Landingham in both appearance & personality. We know what happens to great brainy liberals. I supported a number of them in various primaries & general elections & they all lost, every single one. & Scott Brown can beat Elizabeth Warren if she doesn't get it together, believe me, even as Obama crushes Romney there. Because he's a stinking scumbag but if you haven't noticed a very adroit politician. She is not, at least not yet.
9/7/12, 12:45 AM

jurassicpork said...
Since Brown is my lame duck senator, I've been looking at him up close and I don't see a very adroit politician, at all. He's been desperately sucking up to the Koch brothers for money (on camera) and started this ridiculous meme of Liz Warren not really being a native American. Then, two days after he's sworn into the Senate, he sides with the Democrats and permanently alienates his Tea Bagger base, which he won't have this time around.

Polls be damned. Warren's got this one locked up and I just know she'll be a terrific senator. She's the sizzle and the steak and Obama throwing her under the bus was a mercy in disguise because it allowed her to seek a much more powerful office.
9/7/12, 10:32 AM
Post a Comment
<< Home
Contact
Home
Email:
brilliantatbreakfast at gmail dot com
RSS