Brilliant Recent Posts
What I miss most is time
Forget what the Republicans tell you...the truth i...
Déjà vu all over again
Let all the poisons that lurk in the mud hatch out
And here you have it.
Hackity hack hack hack hack hack
Caturday: It's not too soon to think about 2016
The best thing you will read about Gabrielle Giffo...
I may have to root for the Minnesota Vikings this ...
Nation of Four-Year-Olds 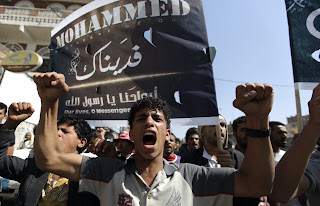 September 11th is becoming a day of infamy for humanity. 9/11/73 was the day Pinochet grabbed power in Chile and assassinated Salvador Allende with the complicity of our right wing government. September 11th 2001, recently observed, was the day 19 al Qaeda terrorists allegedly flew two planes into the World Trade Center, one more into the Pentagon and another into a field in Shanksville, PA. And this past September 11th, as we were remembering the nearly 3000 who were killed, jihadists in Benghazi attacked our embassy with mortars and killed four Americans, including our ambassador to that country.

Nearly everyone's to blame for the death of Chris Stevens, our ambassador to Libya, and three other people. "Sam Bacile" is to blame for his shitty little Youtube hit job on Islam and the prophet Mohammed. The AP and the Wall Street Journal have blood on their hands for not vetting this guy's story and spreading the lie that Bacile (more than likely a convicted crook and Coptic Christian named Nakoula Basseley Nakoula, who's now running for his life) was an American Israeli Jew whose film, the sarcastically-named, "Innocence of Muslims," was financed by 100 other Jews.

This, as has been long since been revealed, is an outright lie and once a lie takes hold, the truth hasn't got a chance.

Whether or not the attack on our embassy in Benghazi, Libya was the work of "well-armed, well-trained and well-equipped" terrorists as Senator McCain claims, thin-skinned Muslims who plainly have mental and emotional issues have no right attacking our embassies in Libya, Cairo, Yemen and elsewhere.

To his credit, Sen. John McCain chose not to attack the president for something that's plainly not his fault (despite the Yahoo News yahoo who tried poking the hornet's nest). But it could posited that the Democratic Party's hastily-rigged and undemocratic move to name Jerusalem as Israel's capital, one reminiscent of the lightning-fast Republican vote in Wisconsin last year to strip collective bargaining rights from union workers, could have something to do with the anti-American sentiment that's currently sweeping across the Muslim world.

Last year, we saw the Arab Spring against totalitarian, undemocratic regimes. This year, we're seeing the Arab Fall, except the reputation of the United States is falling.

In the ultimate scumbag move, Republican presidential candidate Mitt Romney waited until just after midnight on September 11th to take the podium to blast the Obama administration, unfairly and untruthfully, for supporting the very same people who attacked us. It was yet another bloody, quivering chunk of red meat thrown to the birther/Bircher faction engineered to more than suggest that Obama is a Muslim, after all, and that this is proof of his alleged pro-Muslim sentiments. 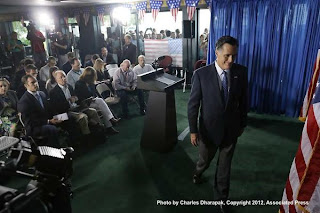 However, the only thing that was proven was that Mitt Romney is a racist, opportunistic right wing scumbag who was so proud of his timely political grandstanding that he'd actually smirked with satisfaction the second he turned his back on the podium.

In reality, Romney pretty much sealed the fate of his long-doomed campaign and thereby guaranteed he'll never get to be president of the United States after that stupendously sleazy move.

Because about the only person who's blameless in this affair is our president, who responded swiftly, decisively and in a very presidential manner, dispatching 50 additional Marines to Benghazi to better protect our remaining embassy staff.

But if humans had the capacity to learn from its worst mistakes, it wouldn't keep making the same ones over and over again.
0 comments