Brilliant Recent Posts
Countdown to "Mad Men": Spotlight on Race
Of course he used a racial slur!
First They Came After Our Papers...
Tim Tebow is NOT Jeremy Lin
And so the Republican line of succession continues...
Blogrolling In Our Time
What a long, strange trip it's been
Meanwhile, back in racist Amerikkka...
No. Just. No.
The crime of walking while black 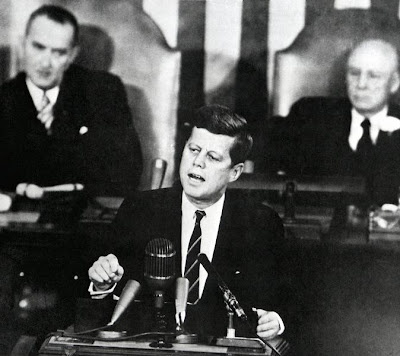 The first and basic task confronting this nation this year was to turn recession into recovery...The recession has been halted. Recovery is under way... But the task of abating unemployment and achieving a full use of our resources does remain a serious challenge for us all. Large-scale unemployment during a recession is bad enough, but large-scale unemployment during a period of prosperity would be intolerable... Finally, our greatest asset in this struggle is the American people--their willingness to pay the price for these programs--to understand and accept a long struggle--to share their resources with other less fortunate people--to meet the tax levels and close the tax loopholes. - President John F. Kennedy, "The Urgent National Needs" speech, May 25th, 1961

Few nations do more than the United States to assist their least fortunate citizens - to make certain that no child, no elderly or handicapped citizen, no family in any circumstances in any State, is left without the essential needs for a decent and healthy existence. - President Kennedy, "Special Message to the Congress on Public Welfare Programs", February 1, 1962

When the eulogy of this listing, wobbling, Hindenburg of a democracy is written, it will no doubt point out the irony that the American people who are almost genetically hardwired to worship freedom at all costs are also the same people that allowed their most basic and inalienable freedoms to be taken away with hardly a whimper.

It's immaterial what the reason(s) was/were, whether it be distraction, fear, apathy, laziness, sheer stupidity and gullibility or an admixture of all of the above. The important thing to remember is the end result, that our once-great nation has devolved from a great, humanitarian state to one in which charity, mercy and Altruism was systematically purged from the state and broken up into random pockets of private endeavor.

We've long since begun acclimating ourselves to the sad but true reality that indigence has been criminalized. You get caught driving your car after your registration has been revoked because you couldn't keep up with the insurance payments, you get convicted if you cannot afford legal representation better than some disinterested hack from the state Bar Association. If you can't afford to pay the inevitable fine, you go to jail. And if you can't afford RomneyCare in Massachusetts, you lose your $900+ personal tax exemption for "noncompliance."

So, what's the next step after criminalizing and demonizing indigence? Criminalizing and demonizing any private attempts to alleviate indigence. We're now a gigantic zoo in which there are invisible signs posted that say, "Do not feed the homeless." And this isn't merely here and there but in major cities from coast to coast such as Philadelphia, Orlando, Houston and Dallas, Texas, Las Vegas and billionaire mayor Mike Bloomberg's New York City.

And even cities too craven to outright ban feeding the homeless still make it so conditional that practicing even this random act of charity is virtually impossible, with excuses including the unknown nutritional value of donated food. Permits to feed the indigent in some cities are restricted to two a year.

Yes, people, we live in a nation where greed and recklessness in the corporate sector not only goes unpunished but even rewarded and viciously protected by we their victims but any attempts to alleviate the fallout of those ruinous practices is criminalized and give you an arrest record. Doesn't that just make you want to burst your buttons with pride knowing that we have strayed so far from the humanitarian ideals once championed and enacted by the Kennedy/Johnson administrations?

And let's take a look at that from a bird's eye view for a moment: Medicaid and Medicare are now under fire. The Civil Rights Act of 1964 is now being questioned and Republicans like Rand Paul are pissing and moaning about how it infringes on the freedoms of store owners. Hell, FDR's once unassailable sacred cow, Social Security, is even more under fire from the Republican Party and the ever-compliant, moderate right winger we elected as president over three years ago allowed the Republican Party to begin the systematic underfunding of Social Security by slashing the tax rate by 2%.

Hell, let's go even further back and note that Sen. Mike Lee of Utah saying just last year that child labor laws were "unconstitutional" and ought to be repealed and Newt "Man in the Moon" Gingrich saying just this year that we should take indigent children out of the classrooms and stick them in janitor's closets where they belong.

The history of child labor laws begins in New England in 1832, meaning radical Republican scumbags like Lee and Gingrich actually want to push us back to the dawn of the 19th/end of the 18th century.

Meanwhile, Wall Street fuck dolls such as Paul "Voucher" Ryan are drawing up plans for even more tax cuts designed to put nearly $200,000 more in the pockets of people who are already multimillionaires. It's people like Ryan who are so incensed over the tepid reforms of the gin mill class watered-down ObamaCare that repealing it and replacing it with nothing but vouchers has become the biggest plank in the Republican Party's national platform.

Through unchecked, unregulated greed, Wall Street callously and sociopathically cost millions of Americans their jobs, pensions, 401(k) plans and millions more their homes. Yet, while not one Wall Street firm or hardly even one executive has even been indicted or charged for these economic crimes against humanity, close to 2000 occupy Wall Street protesters have been beaten, tased, gassed, arrested, charged and convicted for protesting these thefts for reasons that are as ridiculous as Bloomberg's excuses for banning feeding the homeless they helped to create.

And yet this selfsame 1% who are hollowing out this nation like a handful of piranha hollowing out a water buffalo carcass on the Amazon are successfully perpetuating the meme among the Deep South and other festering pockets of misguided conservatism that liberals are the bad guys. The hatred of liberals is so venomous that every day millions of wingnuts or however many are smart enough to use a computer contort their thinking with sideshow tenacity to somehow blame Obama and his fellow Commie liberals for every evil that infests this country.

Like Social Security, Medicaid, Medicare and the progressive tax rate that built the Eisenhower highways in the early 50's that they blithely use while going to sparsely-attended Tea Bagger rallies.

We live in a nation where several states, most notably Florida, have enacted "Stand Your Ground" laws that allow police groupies such as George Zimmerman to murder unarmed black youths who are trying to run away from them and to do so with impunity. Murder an unarmed African American youth? No problem. Peacefully protest corporate greed? Get shot in the face with a tear gas canister and nearly lose your life.

Why, such criticism is just unacceptable, said a Captain of Industry recently. Such impotent outrage and criticism positively "incensed" him.

Many of you blamed Katrina victims for their own victimhood and for having the temerity to have their neglected, bloated, drowned bodies embarrass the poor Bush administration that took 5 days to get water to New Orleans yet we rallied to the aid of San Diego wildfire "victims" by dispatching massage specialists and provided internet access to them. Three years later, elsewhere in California, it made national headlines when luxury cruise ship "victims" were forced to drink stale Korbel for a couple of days and it was yeasted up in the MSM as if it was on a par with the Titanic.

People, stick a fork in us because we're done. Barring outlawed, random pockets and acts of charity and kindness, we've completely lost our moral compass. Liberals, gays seeking mere equality, activists protesting ruinous financial policies, wars and other encroachments on our civil liberties by government and corporations alike (not that there's any appreciable separation) have been turned into criminals and suspects. I've said it before and I'll say it again: We live in one of the very few nations on earth where you can get put on a wanted poster for stealing a loaf of bread but if you steal billions through risky and reckless speculation and vulture funds, you get your name and puss stuck on the cover of Forbes.

And if I ever become by some insanely random miracle part of the 1%, it will be my distinct pleasure to immediately become an expatriot, renounce this toxic American citizenship and watch the final tragic approach of this burning blimp of a country, this red, white and blue nest of woe.

And for those of you ready to make inane wisecracks about helping me pack my bags, let me say this: Whether or not I leave, things will continue degenerating and you will have to continue surviving or succumbing to this nightmare that I've just described. Hating on me or Obama or liberals or Democrats will not make you immune from the inevitable fallout. This nation is killing, poisoning and choking itself on its own bile and you are a mere Matrix battery, an anonymous foot soldier who will be little noted and long forgotten when the secular Armageddon or Judgment Day comes around.

Labels: The Right Wing War on the Middle Class

Grung_e_Gene said...
Government is not the Problem...

jurassicpork said...
Democrats, too. Democrats' hands aren't exactly bereft of blood. I give you Vietnam, NAFTA, DADT, DOMA, the repeal of Glass Stegall, the interning of Japanese Americans, The USA PATRIOT Act, authorizing going to war with Iraq, the Bankruptcy Abuse Prevention and Consumer Protection Act of 2005, Jane Harman's HR 1955, ObamaCare and a massive raft of other bills on which "liberal" Democrats have jumped with disturbing alacrity.