Brilliant Recent Posts
Dear MSNBC: Please give Charles M. Blow his own show
On the other hand, there's this
What About God?
These people do not deserve this country
You can't transplant something that wasn't there i...
Top Ten Reasons Why Dick Cheney Got a Heart Transp...
Stepford Becomes Pottersville
It could be any black kid, at any time
Countdown to Mad Men: Popular Culture, Music Edition
Sweet Jesus, I Hate America, Part II


Romney Pleads, "For Fuck's Sake, Can't You See What an Utter Fucking Asshole I Am?"
Posted by jurassicpork | 8:18 PM 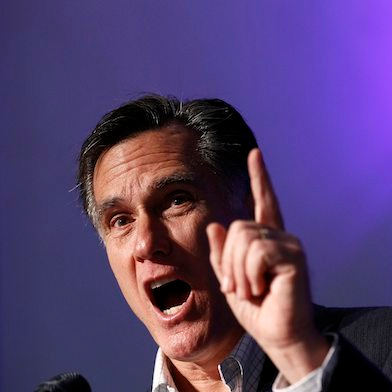 Wisconsin -- On Wednesday, Republican presidential candidate Mitt Romney broke from script once again and blurted out to reporters during a teleconference call, "For fuck's sake, when are you fucking zombies going to wake up and realize what a fucking elitist asshole I am?!"

The 10 reporters taking part of the call were stunned into silence and the former Massachusetts Governor continued.

"Seriously, this has been eating away at me. I just told you what I considered to be a humorous story about my Dad closing a plant in Michigan that cost 4300 workers their jobs and you took it without even a whimper. Seriously, this is really beginning to eat away at me, people. What the fuck do I have to do before you morons wake up and realize I'm an asshole? Stuff my mouth with suppositories and spew baby shit in your eyes? Drink barium from an enema?"

Mr. Romney has in the recent past made outlandish statements that were picked up by liberal bloggers such as when he said that he "liked to fire people and testily told a heckler at last summer's Iowa State Fair that "Corporations are people, too, my friend."

In his native state of Michigan recently on his way to winning that state's primary by a huge margin, Romney admitted that his wife drove two Cadillacs.

"I thought that would've woken up those idiots. But no-o-o. I crushed Santorum by, what, 900 fucking points or something? Those shitheads loved me more than ever. I guess I would've been elected fucking president right then and there if I drove on stage in a solid gold 80,000 pound Rolls Royce and run over my staffers and some babies."

One of the reporters on the teleconference call tried to steer the conversation back to Governor Romney's health care bill in Massachusetts and the current debate over ObamaCare in the Supreme Court. At this point, Romney snatched up the phone and spoke directly into it. 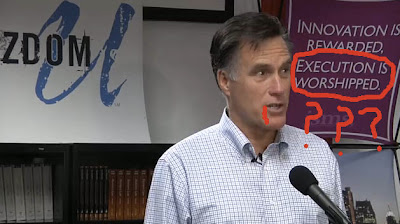 "And you know what, that's another thing. How come you tools don't challenge me often enough and call me on my flipflopping? That liberal lesbian Maddow's got me pegged. I'm not stupid. I know videotape exists and I know what I said and when and where I said it. I know I've flipped and I've flopped about RomneyCare and everything else like a half-dead mackerel. I know I said I wished it would be emulated all over the country. But one of the few people who really 'gets' me are people like Angry Black Lady, who had her ears on when I said that if you knew what what I had planned for this country if I ever got elected, you'd sooner poke out your eyes with burning splints than vote for me.

"But did you listen? Fuck, no. What the fuck do I have to do to prove to you shitheels that I am an elitist motherfucker who would love nothing more than to personally exterminate 99% of you after Super Tuesday? Huh? Go Charlie Starkweather on this country, shoot a million or two then throw them in the water from my yacht? Huh? Would that wake you all the fuck up?

"Jesus fucking Christ on a foam rubber crutch in the middle of an earthquake, I mocked unemployed people in Tampa by saying I, too, was unemployed! They laughed like the fucking goobers they are. The truth is, I'm more interested in lifting four of my luxury cars than I am lifting anyone above the poverty line. Still, you cheer me on, still, you have fundraisers, still I win primary and caucus after primary and caucus. I mean, what'll it take?

"My religion converts the dead, I hate Muslims, I hate dogs more than Michael fucking Vick and am such an uptight Republican asshole that I'd sooner torture one than let myself get even one nanosecond behind schedule.

"You know what this reminds me of?" Mr. Romney said with a savage gleam in his eye as he stood up, "Remember when that fag Freddie Mercury got up on stage wearing those leather biker outfits and prancing around in assless leather chaps? It was like the poor guy was screaming, 'I'm a fag! Why can't you see that???' Well, this is my Freddie Mercury moment. Watch this."

Romney then slammed down the phone and stabbed in the left eye the child of a potential voter with a solid gold letter opener, licked the blood off it and carefully set it on his desk again before going out to greet more supporters.
4 comments

mbarnato said...
So many perfectly descriptive, sharply pointed comments! I especially like: "if you knew what what I had planned for this country if I ever got elected, you'd sooner poke out your eyes with burning splints than vote for me." And yes, we would...
3/29/12, 7:08 AM

Jimbo said...
I like the steady build up of frustration of Romney over the fact that the MSM are not getting it in his press "availability" until he really goes bananas.

Problem is that this post presumes that Mittens has actual real feelings, that he is empathic. Don't think so. He's more comfortable on the Android scale.
3/30/12, 9:36 PM
Post a Comment
<< Home
Contact
Home
Email:
brilliantatbreakfast at gmail dot com
RSS