Brilliant Recent Posts
Tim Tebow is NOT Jeremy Lin
And so the Republican line of succession continues...
Blogrolling In Our Time
What a long, strange trip it's been
Meanwhile, back in racist Amerikkka...
No. Just. No.
The crime of walking while black
This may be the best political mashup since D.J. T...
The culpability of the university
Happy St. Patrick's Day


First They Came After Our Papers...
Posted by jurassicpork | 7:08 PM 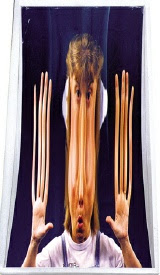 Yes, folks, this is how much of a funhouse reflection of its former self our nation has become. Now universities and government entities are asking people for their Facebook passwords and deciding whether to give them scholarships or jobs based on what they see. Says the Huffington Post:

MSNBC reports that some government agencies and colleges are now requiring applicants to give them their Facebook passwords so that they can see what's behind the privacy wall.

Examples include Maryland's Department of Corrections asking applicants to let an interviewer watch as they log into their Facebook account, as well as some colleges that require athletes to accept friend requests from coaches, according to MSNBC.

There's not much you can do about Depts of Correction and universities because the US Constitution doesn't apply to them. It does, however, apply to any federal agency that apparently has never heard of an obscure old law called the 4th Amendment (illegal search and seizure).

Let's just set aside for a minute the absurdity of Facebook acquiring this much power and credibility to the point where it's now become a national barometer for individual moral character or the lack thereof. After all, this overrated website was purloined from the beginning by a dishonest douchebag named Mark Zuckerberg who not only ripped off Harvard University but his closest friends and partners and would later crawl into bed with Goldman Sachs. He's made a billion dollars for every year he's been alive by selling your personal information that you're stupid enough to give him.

As justly maligned as it is, perhaps the biggest attraction of Facebook to over 750,000,000 users is that it permits the privacy many of us need to let down our hair and be ourselves or be someone we're not and to do so without fear of retaliation.

Long before Myspace, back when Mark Zuckerberg was pushing around a projector for the AV squad in high school, we thought trading a little bit of liberty and civil rights was a good thing when Bush and his jackals were drawing up the Enabling Act USA PATRIOT Act and had set up the Department of Homeland Security. We were told the price of liberty and constitutional protections were necessary if we wanted to continue living in this, uh, liberty-laden, free society. We were told, "Don't worry, you'll get your God-given rights back as soon as we're done with them, as soon as beat them suiciders," and we gulped and said, "OK."

Because the neocons, working hand-in-hand with the terrorists, ensured the terr'ists would win by ensuring we would live in fear, that we'd wet our pants at the sight of a person darker than us wearing a do-rag or smelling vaguely of falafel. And we were still OK with that even after it became obvious that even after bin Laden was killed reaching for a bag of Skittles and a can of iced tea that "the loss of a little bit of liberty was worth every second and then some of the security we got in exchange" and completely forgetting what Benjamin fucking Franklin had to say on that very subject.

This was still A-OK with many of you sniveling assholes because you honestly never saw this coming, this one inescapable, ineluctable fact: That unchallenged abuse only encourages more abuse.

Now, the very government that's supposed to honor the Constitution from top to bottom is now breaking that very basic law called the 4th amendment by demanding we hand over what's one of the few things remaining to each person and each person only: Our social network passwords.

So, vetting references, criminal background checks (CORIs), humiliating drug screenings even credit background checks aren't enough for some people, now they need to know what you say and do when you're on your own time when you think no one's looking or ever will be looking. It's only a matter of time before they continue by asking us for our IP addresses so they can find out where we go online all the time, then, if genetics holds out the faintest hope of being a predictor of future behavior and future job performance, blood tests.

Bravo, people. I really hope that Bush and Cheney keeping the terr'ists at bay after 9/11 was worth it because now you can say bye bye to the freedoms you took for granted when Clinton was still president.
3 comments

The Wifely Person said...
As much as I hate to point this out, there is _NO_ expectation of privacy on the interweb. None. Nada. It doesn't exist. Anyone who is dumb enough to put flashing pictures up on FB is going to reap what has been sown.

The net is worse than newspapers. It never goes away. it's always out there and you cannot get it back.

Of course asking for a password is an invasion of what little quasi privacy you have, those guys don't need it. They can find what they want with some judicious "investigating."

Phil said...
They can't have what doesn't exist.
I deleted my account twice, the last time for good.

Damned kid kept changing my picture out for Sarah Palin, I finally had enough.
I could have just changed my password but I was hardly ever on it anyway.

As I recall, when Obama got elected, he wanted to know everyone who wanted to work for him to give a complete history of their internet presence, if they had ever submitted a letter to the editor, made comments on Blogs, everything.

I made the mistake of telling a co worker about my Blog once, that blew up in my face later.

casey said...
Hello S. J. Schwaidelson-Siegfried,
I am glad that you are an authority on privacy on the interweb but I have a great expectation of privacy even though it was taken by you and others (which includes the interweb). You gave it up in my and other peoples name.
3/23/12, 4:57 AM
Post a Comment
<< Home
Contact
Home
Email:
brilliantatbreakfast at gmail dot com
RSS