Brilliant Recent Posts
"Take Me Out to the Ballgame... in Style"
Messin' With The Kid
Waiting for G'Duh.
It's a Sarah Palin world, we just are allowed to l...
Amerika: No dancing allowed
In non-Sarah Palin-related news...
Saturday Big Blue Smurf Blogging: What They Said
I want these two kids to meet up in college, get m...
The Daily Weiner
You know, Sarah, you can take something for that


Top 10 Ways Evangelicals Will Prepare for the Rapture II
Posted by jurassicpork | 4:00 PM 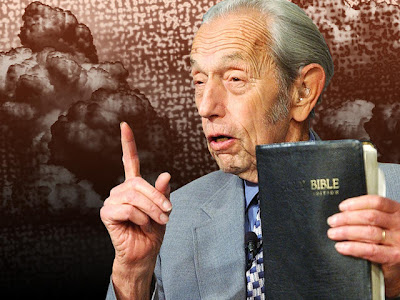 Harry Camping's very believable and credible threat that the world would begin to end and the Rapture would occur on May 21st didn't materialize, to the surprise and even disappointment of millions of evangelicals. Bewildered and eager to save face, the Family Radio Network's Camping and his $18,400,000 in donations last year disappeared and reemerged days later to say that he'd, once again, made a miscalculation. Now Camping is saying that May 21st was the day God completed his list of who's naughty or nice and the world will indeed end on October 21st. So how are evangelicals preparing for the second Rapture of the year?

Nameless Cynic said...
noting there's no mention of a fucking Rapture in the Revelations of St. John the Divine.

For the Lord himself shall descend from heaven with a shout, with the voice of the archangel, and with the trump of God: and the dead in Christ shall rise first: Then we which are alive and remain shall be caught up together with them in the clouds, to meet the Lord in the air: and so shall we ever be with the Lord.

The whole scam started in the 17th century with Increase Mather and his son Cotton (because the Puritans had the coolest names), if you're curious.
6/2/11, 7:38 PM
Post a Comment
<< Home
Contact
Home
Email:
brilliantatbreakfast at gmail dot com
RSS