Brilliant Recent Posts
Messin' With The Kid
Waiting for G'Duh.
It's a Sarah Palin world, we just are allowed to l...
Amerika: No dancing allowed
In non-Sarah Palin-related news...
Saturday Big Blue Smurf Blogging: What They Said
I want these two kids to meet up in college, get m...
The Daily Weiner
You know, Sarah, you can take something for that
A High Fly Into the Stands 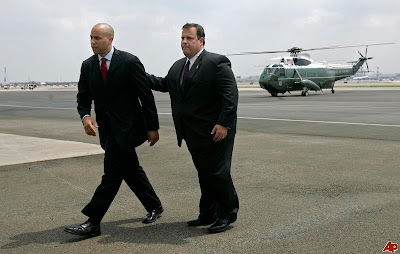 "Just another five feet to the limo, Governor." "(Puff, wheeeeeeeze.) I don't think I can (huff) make it, Cory!"

I've been waiting for Jill Hussein, New Jersey blogger extraordinaire, to mention the latest antics of her noxious blimp of a Governor Chris Christie. But, as she's gotten my back on countless occasions, I guess I'll have to return the favor.

As is usual with stories of Republican fuckuppery and hypoChristie, it starts out outrageous then by paragraph two it just gets worse.

New Jersey governor Chris Christie--who has made government reform a major talking point of his administration--is coming under fire for his decision to travel in a state-owned helicopter to his son's high school baseball game Monday.

Then the money shot:

According to the Newark Star-Ledger, Christie landed in the state's $12.5 million helicopter just before the game began, buzzing over the trees in left field and distracting spectators. The GOP governor then got into a black sedan with tinted windows, which drove him about 100 yards to the baseball diamond.

You read that right. The fat fuck couldn't be bothered to waddle the 100 yards between the illicitly-appropriated chopper and the ball field.

Then, they stayed for just five innings, drove back to the chopper and somehow, the poor machine achieved takeoff and stayed aloft long enough to get Christie's fat ass back to the state house.

They're making lot of hay over this in the Jersey press but what every one seems to ignore is that there were two vehicles involved because where ever the helicopter went, the sedan had to follow. All told, with gas at $4 a gallon and helicopter fuel (for turbine engines, that translates to "very clean kerosene") going for more than that... Well, let's break it down:

A five seat turbine helicopter, according to this expert, burns about "25 to 30 gallons an hour."

According to this website, the price of clean kerosene in New York statewide reached 434.6 per gallon as of April, which is actually $4.34, or more than gasoline. We don't know where Christie came from because his Reichstagg won't reveal that but say he flew the 70 miles from Princeton each way, that's 140 miles. At a modest speed of, say, 70 mph (or about as fast as a military transport helicopter can carry Christie's bulk), that means the state chopper burned 50-60 gallons of kerosene jet fuel. At, say, $4.34 a gallon, that means it cost the New Jersey taxpayer about $217-260.40, not including the cost of a full-size sedan to follow that same helicopter both ways, just to haul Christie's fat ass a grand total of 200 yards.

I'll leave it you to calculate the cost of gasoline for that limo.

I guess when Christie was in high school and college, he was dreaming about tap-dancing Twinkies singing, "Eat me, eat me!" during math and economics classes. And only a Republican criminal oligarch would call for sacrifices to be made by working-class people when this corrupt piece of shit is pretending that he's the president taking Marine One chopper rides that cost hundreds in taxpayer funds just to catch a few innings of a high school baseball game.

Personal security? Please. Show me the last New Jersey governor who ever got assassinated while in office. This was privileged laziness, nothing more.
2 comments

Elayne said...
All right, come on JP, cool it with the fat jokes. I have no use for the guy either, but surely there are enough odious things one can say about Christie without the fatphobic commentary.
6/1/11, 10:45 PM

Anonymous said...
Unless blimp-Christie's overweight is caused by some medical condition, I think we voters have every right to call attention to his bulk.

If Blimp Boy is so huge because he cannot control his urges and impulses and appetites, we need to know about that too, because it indicates that he is Out Of Control (which is, I suspect, the true cause of his bulkiness).
6/7/11, 9:50 AM
Post a Comment
<< Home
Contact
Home
Email:
brilliantatbreakfast at gmail dot com
RSS