Brilliant Recent Posts
Rall to Arms
Does this include the mama grizzlies too?
The return of debtor's prisons
Like maggots crawling out from under a rock....
Set your DVR NOW
Your Tax Dollars At Work
And speaking of Republican hero Chris Christie...
Here's how it's done
If Republicans are the party of fiscal responsibil...
Toner cartridges of mass destruction 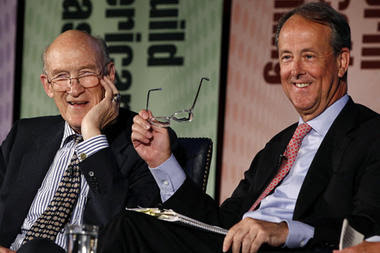 At one o'clock today, the President's Debt Commission, uncharitably called the "Cat Food Commission", released its list of recommendations for deficit reduction. Among the solutions proposed by the 50 page Simpson/Bowles report are reductions in funding to the National Park Service, the Smithsonian, National Public Radio and farm subsidies as well as reductions in Medicare, Social Security and raising the minimum retirement age. There was also, surprisingly, a recommendation for a cut in corporate tax rates. But what other changes in spending were proposed by co-chairs Simpson and Bowles?

squatlo said...
Cut corporate tax rates to help solve the deficit problem? Gee, did Karl Rove and Rush Limbaugh sit in on committee meetings with this group?
I've got a suggestion: charge everyone who neglects to vote a $50 annual fee for sitting on their asses while Democracy goes down the toilet. Put a 10% tax on all political fundraising donations given to the nameless PACS and attack groups, collected by adding the tax to their fees for ad time on TV, radio, and newspaper ads, and used to then fund a program of clean elections. Here's one: if a sitting member of Congress retires or is voted out of office and then becomes a lobbyist within five years of leaving office, he loses his Congressional pension and insurance benefits for life. Just random thoughts...
11/10/10, 4:45 PM