Brilliant Recent Posts
Why, yes, I really DO need to get a life. Too bad...
If You're a Woman...
If we could all just agree that Republicans and te...
Glenn Beck Wins Nobel Prize for Literature
Still funny after all these years
Now the GOP is caught between a rock and a hard place
Doing Our Best to Keep Fear Sane.
The Kruginator on the owner of the Republican Party
Now THIS, my friends, is what a REAL "mama grizzly...
It's not a cost, it's rainbows and puppies -- beca...


Tales of the Peanut Gallery
Posted by jurassicpork | 7:29 AM 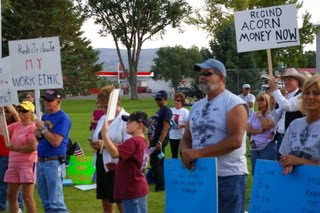 You dumbass dirty socialist asshole, you have no clue how market economies and capitalism works. If you cock sucking leftists get your way, you will likely rue the day you did, because there still won't be any such thing as a free lunch, and you'll likely be the among the first victims who whine and cry yourself right into an American leftist version of the Gulag, and join the piles of skulls and bones it'll generate.

You've got it good, because of people who are you betters. These firefighters, and Glenn Beck, are your superiors and betters; the asshole who didn't pay his dues and expected a free lunch got exactly what he deserved and paid for: nothing at all.

Your friendly neighborhood blogger Jill Hussein passed along the above comment and, to those of you who know that I counterpunch like a bionic Alan Grayson, it was guaranteed to start my day off with a chuckle. Jill said she refused to publish it but she just thought I'd be entertained by it.

If it was up to me, I would've published this amazing screed even if only in the interests of context but that was Jill's call. I can only post here, not moderate comments. After all, if I had responded to it, even the most cynical of us would shake our heads and declaim this as a fabrication of an over heated liberal imagination, a blot of mustard or an underdone potato. Bah humbug!

The first problem one has with this post, of course, is in trying to assign a word for the letter "A" in his acronym. Well, that would have to be "ain't" which, while it's been included in our finest lexicons for decades, is nonetheless the bastard of contractions and therefore no one who uses it in serious conversation can be seriously entertained.

Mayor Fiorello LaGuardia once used the phrase "No more free lunches!" as a way of describing graft and that seems to be a good jumping off point because the free market system in our mutated capitalist Hell is so corrupt and predicated on personal and collective greed that one marvels at how it can function at all.

If history, usually our best guide, is any indicator, it will inform individuals more informed than our resident crackpot that the free market has historically been far inferior to government-funded entities such as the military, our prison system and so forth. The free market has been an abject and almost unrelieved, miserable failure, especially of late. It has been rife with corruption and when billions in taxpayer dollars are poured into private industry to replace jobs that had been hitherto held down by government employees, the potential for fraud is boundless. We need look no further than Iraq for this and we haven't even begun hearing the stories of contractor fraud and waste in Afghanistan.

The free market and the Republican fascists who love it have given us scores of half-built hospitals in Iraq at a cost of hundreds of millions of taxpayer dollars plus millions more in incentive bonuses paid out to these same corporations that have long since been kicked out of Iraq (the Parsons Group). Halliburton, we've known for years, double billed us on fuel costs and is guilty of electrocuting our troops. Its former subsidiary Kellogg Brown and Root, had raped and imprisoned its female employees, gave the troops contaminated drinking water and poisoned our troops with bacteria-laden food and that's just the tip of the iceberg. Feeding the troops and several other functions were once the purview of the pre-Rumsfeld military. When one looks at the Republican record, one sees an unmistakable pattern of supporting private industry (ideologically and monetarily) moreso than the troops. For instance...

The outsourcing to private industry of the care of our wounded soldiers at Walter Reed resulted in shocking and appalling living conditions and one Halliburton-affiliated company was so lazy in its duties that the troops' mail wouldn't even get delivered for months at a time.

Our security contractor, Blackwater, had been found guilty several times of murdering innocent Iraqi civilians, gun running and illegally taking point while engaging the enemy. The security they'd once provided to the State Dept. used to be done by State Dept. security people.

Private for-profit prisons such as the medieval criminal mills run by CCA generally lose their accredidation for giving a lower than standard level of care to their inmates.

Three private companies are collecting taxes for the IRS, including one Texas-based entity under federal investigation, and they're focusing their energies not on private corporations that generally don't pay their billions in taxes but easy targets like us.

Private industry is now doing the work of blue badges, actual intelligence operatives. They're called green badges and, when their contracts are up, they take the national security secrets spoonfed to them back into the private sector, with their security clearances still intact, thereby making them coveted in the intelligence-gathering private sector.

Private contractors are partly the ones guilty of abuse of innocent detainees in Gitmo, Abu Ghraib and Bagram, to name just a few more notorious examples.

And only a raving fool such as yourself would claim that private HMOs do a better job than Medicare, which has a 3% operational budget as opposed to 50% with some insurers. These are the same entities that make billions each year by denying health care, kicking people off for "pre-existing conditions", charging deductibles up to $5000 or more for slightly better premiums and essentially doing their damnedest to not pay for even routine procedures.

And now private industry in the form of Infragard, a cabal of Fortune 500 companies, is gunning for you. They've been deputized by the Dept. of Justice and are legally authorized to kill any of us on the dodgy supposition of us endangering the infrastructure. Often, they know about terrorist threats even before public officials and they'd already decided years ago that martial law is not a matter of if but when.

This is just a partial laundry list of some of the most colossal failures of private industry when it's contracted to fulfill functions once done by government agencies with greater economy and a much higher level of competence.

But let's just suppose, my dear Serr8d, that there was a reasonable, free market alternative to a county fire department for our poor dear friend Mr. Cranick. Who would do it? Who would have the training, the equipment, the ubiquity to undertake the dangerous task of running into a burning house and saving lives? Once again, and I hate to reiterate, we'd gone that route before in the 19th century and produced instead of a professional fire department thugs who were very little more than street gangs and looters, mercenaries whose only motivation for getting to a fire quickly was insurance money.

Yet, sadly, even that is unavailable to our poor friend in Tennessee.

And let's ask ourselves another question: Suppose, in their panicked escape, the Cranicks left a member of their family in the house? Suppose a child was trapped in the home and that child died because of the fire department's inaction. Would you still be trumpeting the triumph of a free market system and denigrating someone who until a few days days was a homeowner if a child was allowed to burn to death over a $75 fee that had innocently gone unpaid?

Considering that you're obviously a spittle-flecked teabagger, my guess is yes and not only that, you would've doubled down and hurled even more abuse at me.

But the fact remains that today's outsourcing-happy Republicans are penny wise and pound foolish. While bleating about balancing the budget and cutting taxes that coincidentally benefits them personally, they'd nonetheless have no problem taking those uncollected tax dollars, multiplying it by a factor of 10, 50 or 100 and throwing it into the money pit of private enterprise.

Therefore, instead of simply assessing an additional $75 a year to be automatically collected in their property taxes, their voting record will simply say they lowered taxes like good Republicans do and pass the onus of paying onto the homeowner and to blame them for the consequences of the severance of services traditionally rendered to civilized people in industrialized nations.

A man's house burned to the ground and everything within it over $75 and you're screaming that this is somehow justice, divine will as only Milton Friedman can provide. You are a sick, sad, delusional little man, my dear Serr8d.

And you are championing a sick, sad, delusional little man by the name of Glenn Beck, a man who by all rights, in a slightly more perfect world, would have a red hot 24 karat microphone shoved and twisted up his fat ass for all eternity. You, my dear little friend, are tap dancing in the wrong end zone.

"A free lunch" is defined as expecting the local fire department to put out your flaming house? You fool, this is a man who paid his taxes and was left with a smoking foundation where his house used to be. God damn you and Glenn Beck and Pat Gray and every other libertarian/Republican fuckwad who would even think of throwing a working man an anchor in place of a life preserver. I only hope and pray that you and Beck and co. one day find yourselves at the mercy of private industry.
3 comments

The New York Crank said...
Comes the revolution, we will line the Republicans, Tea Party poopers, so-called Libertarians and free marketers up against the wall and force them to take spelling lessons.

But please, don't call them cranks.

mandt said...
"nonetheless the bastard of contractions and therefore no one who uses it in serious conversation can be seriously entertained" Still, the troll-streak Serr8d does induce in one the need to take an immediate shower and thoroughly wash every dirty thing imaginable as a diligent form of genre entertainment. Being the compassionate liberal that I am though, I volunteer to sneak through the barbed wire of his gulag confinement, the occasional triple whopper with bacon and biggie fries with the ironic intention of a 'free lunch.'
10/7/10, 2:38 PM