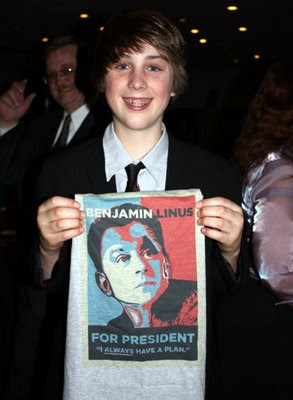 (Spoiler alert: For those who have yet to see last night's finale of LOST, you may want to hit your backspace button and not read this post.)

Years ago, I suspected that this is how LOST would end: The castaways would find out they were dead all along. But I dismissed that as beneath J.J. Abrams' talent as a writer. Doing so would've been been a limp retread of that entire season of DALLAS in which we find out the entire year was just a dream. It was one of the most notorious jump-the-shark moments in TV history.

Little did I believe that Abrams would go for that very ending. For six years, we always had faith that by the series finale, all loose ends would be tied up tighter than a Jack Shepard tourniquet and no stone would be left unturned. Instead, we were left with more loose ends than we can count.

For instance, I can understand the philosophical ambiguity of us not knowing where the "dead" castaways are going but we can assume they've moved on and will transition to heaven. While somewhat unimaginative and something a second string writer would conjure, it remains a perfectly valid explanation as to their ultimate destination.

However, what was the island? What was the purpose behind it? Why was the Dharma Initiative so obsessed with it other than a vague mission to harness the island's potent but largely unexplained power? And Charles Widmore never adequately explained his own obsession with the island or what specifically he was after other than an equally abstract desire to also harness its power?

If they were dead these past six years, why were Kate and Sawyer/James Ford allowed to leave the island with Miles, Richard and Frank? Leave the island to go where? Richard had lived on the island most of his life and Frank and Miles arrived on Widmore's freighter and weren't on Oceanic 815.

Same with Desmond and Ben Linus, who were left behind on the island with Hurley, the new Jacob by default. And if Hurley and Desmond (and possibly Ben, who preferred to remain outside the church) transitioned to their final journey, then how could they remain on the island?

And if the island could in a metaphysical way resurrect the dead, then why were there only 48 survivors from the fuselage in the pilot episode (more from the later discovered tail section) and why did most of the passengers immediately perish in the crash? And why wasn't Michael, one of the original characters, at the reunion?

Midway through LOST's run, after we find out at the end of season three that some of the castaways managed to escape the island, it became very difficult to follow the twists and turns visited on us every week what with time travel, alternate universes and realities and so forth. But I managed to see every single episode of this series and the lack of resolution, while it isn't enough to justify a feature length movie, left me hungering for more.

While there's something universally satisfying about all of us coming to terms with our individual ends, it nonetheless is kind of a bittersweet resolution considering that almost all the characters went on to better alternate lives only to be told through overwhelming consensus that this, too, was an illusion and that their transition would be an ambiguous one. Many of these characters, especially Hurley, Jack and Desmond, finally figured it all out and set up lucrative, satisfying lives for themselves only to be told this was a lie and they'd have to give it up for an ambiguous fate with no guarantee of eternal happiness.

It was like "Lets Make a Deal" and being forced to choose the one door offered.

About five minutes before the series ended, I just knew, being a writer with an instinct for the circular, that the closing image would be the exact reverse of how the show opened six years ago: The dying Jack Shepard closing his eye, with Vincent the yellow Lab by his side. It was a nice, elliptical touch but not so nice as to make up for the unanswered questions and untied loose ends that offer lack of resolution while not seeming to justify a feature-length film that would.

Was anyone else as dissatisfied with the ending as I was?
4 comments

Ken Ashford said...
I don't think the castaways were "dead all along". They were merely dead with respect to that particular timeline -- the one that started in the sixth season. As Jack's father explained to Jack, some of the castaways died long ago; some of them not for many many years afterwards. But the characters (or the island?) created this timeline so they could all be together before they moved on.

Now, if it had truly ended that they were dead from Episode 1 (a la The Sixth Sense), THEN I would agree that it would have been cheesy.

As for my reaction, well... it took me a while, but sometime during the sixth season, I just accepted LOST on its own terms. I resigned myself that it wasn't going to answer all the questions, including what was (for me) the ultimate one: "Just what is the island?"

I, too, have that writer's instinct to close the gaps and tie everything in a nice little bow. But that kind of a finale would have been very un-LOST-like. And I'm glad, in a way, that the writers resisted that urge (although I do wish ABCs promos for the past several weeks hadn't led me to believe that "all questions will be answered"). I'm not sure that narrative ambiguity WORKS -- and a certainly wouldn't like it to become a trend -- but I tip my hat to the attempt to defy convention, if only to show that perhaps some conventions shouldn't be defied.
5/24/10, 11:32 AM

Unknown said...
Odd, but I had a completely different interpretation than you. I did not infer that the castaways had been dead all along.
5/24/10, 12:47 PM

I think there are 2 kinds of Losties, and I suspect they largely break down by gender: There's the ones who care about the characters, for whom this ending was just fine, and the ones still obsessed with what happened to Walt, what the Dharma Initiative was trying to do, and on and on.

There is an element of throwing up your hands and giving up to this finale, but it also made sense. I get the sense from your post that you are assuming the island reality is death, but Jack's father makes clear that the island was real. Hurley's exchange with Ben also shows that. I too thought perhaps they were all dead when I saw the wreckage at the end, but I think that was a bittersweet image, nothing more.

What I am surprised by, though, is the strong element of the end of TITANIC in this -- something I would not have expected from Cuse/Lindelof. But while there was a lot that was mawkish here, I loved it...especially the Sawyer/Juliet reunion, which I think many of us longed for as just being RIGHT.

You can dissect the weaknesses, the unanswered questions, or you can take it was a bittersweet goodbye to people we've grown to know and care about (except Kate, who's annoying to the end). I choose the latter.
5/24/10, 9:11 PM

Androcass said...
I had a bunch of reactions to the finale, which I won't blather on about here (except that I think that the end was ultimately about Jack's journey and about his salvation).

However, in reference to Jill's comment about the wreckage, if you look at it closely, there are footsteps around the plane parts, which tells me that the initial crash and survival was to be take as real.
5/25/10, 3:37 PM
Post a Comment
<< Home
Contact
Home
Email:
brilliantatbreakfast at gmail dot com
RSS