Brilliant Recent Posts
The 7 Year Itch
How the Republicans Do It.
Saturday Big Blue Smurf Blogging: What They Said ...
Blogrolling in our time
The Greatest Daily Show Bit You Have Ever Seen
Credit where credit is due
OK, now this is just freaky
It's not a "computer problem", it's crappy softwar...
So, who will wreck whom here?
Thursday Alan Grayson Blogging


Meet The Republican Party Base
Posted by Jill | 5:26 PM 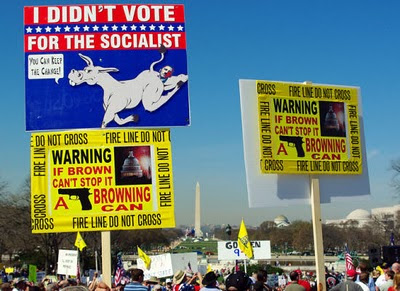 GOP: The Party of Legitimized Hate.

I'm really sick of the mainstream media and hacks like David Brooks insisting that there is no difference between teabaggers and Daily Kos. Voicing an opinion, even a hateful one, is not criminal, nor should it be. But I remember when incitement to violence was regarded as akin to shouting "Fire!" in a crowded theatre -- where the First Amendment ends. We've seen teabaggers harass Parkinson's disease sufferers and threaten gun violence if health care reform passes (above). There was a time not so long ago that simply wearing an anti-Bush T-shirt could get you arrested. Now you can threaten gun violence against public officials and not a peep is uttered.

Here's what happened at today's tea party rally in Washington:

Preceding the president's speech to a gathering of House Democrats, thousands of protesters descended around the Capitol to protest the passage of health care reform. The gathering quickly turned into abusive heckling, as members of Congress passing through Longworth House office building were subjected to epithets and even mild physical abuse.

A staffer for Rep. James Clyburn (D-S.C.) told reporters that Rep. Emanuel Cleaver (D-M.D.) had been spit on by a protestor. Rep. John Lewis (D-G.A.), a hero of the civil rights movement, was called a 'ni--er.' And Rep. Barney Frank (D-Mass.) was called a "faggot," as protestors shouted at him with deliberately lisp-y screams. Frank, approached in the halls after the president's speech, shrugged off the incident.

But Clyburn was downright incredulous, saying he had not witnessed such treatment since he was leading civil rights protests in South Carolina in the 1960s.

"It was absolutely shocking to me," Clyburn told the Huffington Post. "Last Monday, this past Monday, I stayed home to meet on the campus of Claflin University where fifty years ago as of last Monday... I led the first demonstrations in South Carolina, the sit ins... And quite frankly I heard some things today I have not heard since that day. I heard people saying things that I have not heard since March 15, 1960 when I was marching to try and get off the back of the bus."

Ladies and gentlemen, meet the Republican Party base.

Showing the President's head coming out a donkey's ass.

This is what passes for substantive debate on the issue of health care? If this is the best they can do, then why in God's name are these idiots gobbling up so much air time and why is the MSM so strenuously trying to convince us all they're not, in fact, completely insane and/or misinformed?

It was also not too long ago, Jill, that a certain antiwar protester was thrown out of the Congressional building on the eve of a SOTU speech for wearing a tee shirt that simply listed the names of all the American war dead.

It wasn't so long ago when a Florida college student got tased for simply asking John Kerry some tough questions.

But now, for some reason, it's perfectly permissable to bring fully automatic guns to Obama town halls (not just in Arizona but in at least three other states) and we're told that local gun ordinances trump the federal laws that protect the President of the United States.

How can a thinking person not see this is based on race or even racism? That Bush could have town halls cleared over offensive tee shirts and people can bring fully loaded AR 15's when and where the black guy is speaking?
3/20/10, 6:00 PM

Charlie O said...
I'm not one to start dithering hysterically over signs. I'm a gun rights advocate, but even I see a problem with those yellow signs. My reading of them is a direct threat that if the bill can't be stopped with a vote, they are more than willing to kill people to do it. Welcome to the tea party.
3/21/10, 7:10 PM
Post a Comment
<< Home
Contact
Home
Email:
brilliantatbreakfast at gmail dot com
RSS